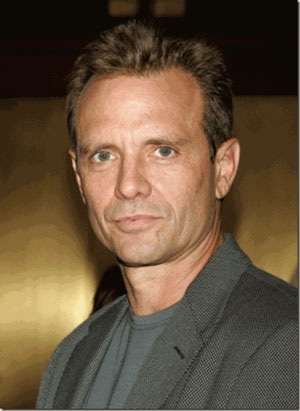 After sitting of top of the world thanks to the pivotal dramatic role in James Cameron’s career-making The Terminator, Michael Biehn joined Cameron for one more epic (1989’s The Abyss) and then dropped decisively off the radar, making a career in low key action/thriller projects ever since.

His latest is post apocalyptic human dynamics drama The Divide, directed by Xavier Gens [Hitman], which depicts a group of strangers locked in a New York apartment building basement area after a nuclear blast. As food starts to run out and tensions rise, the atmosphere inside might be just as dangerous as the radiation and devastation outside, and Biehn plays gruff building superintendent and ertswile survivalist Mickey. At the LA press event, he talked about what he liked about The Divide, how the actors virtually rewrote the whole movie on the fly, and whether he’s really a tough guy.

But first, an understandably proud Biehn and his producing partner Jennifer Blanc talked up his new directorial project The Victim, and how hard it is for even the former Kyle Reese to get a movie shown.

Blanc: We basically signed, sealed and delivered this week. We’re talking about a small theatrical release, very limited in March or April. And then Anchor Bay will roll out from there in colleges. It’s something we’ve never done before, it’s basically a first run college release. We’re going to be in at least 50 colleges as a first run movie.

Biehn: It’s almost impossible these days to find a screen, I came from a town in Arizona, there’s 80,000 people out there and two movie theatres. They’re both Cineplexes and they’re both playing the same movies.

There’s a total monopoly by the studios and there’s never any screens. But it turns out there’s a couple of hundred screens on all these college campuses and we tapped into that. We’ve been promised 50.

That’s a great idea, all those Twitterers will spread the word out.

Blanc: That’s interesting that you went right for that because that’s exactly the thought process behind all this.

How did you come to work on The Divide?

Biehn: Xavier Gens sent me a script and said, ‘do want to play this role, Mickey?’ And the script was okay, the part was okay. But I like to do little bit of tweaking. He said to do anything I want, change it however I want.

So when we got to the rehearsal stage Xavier basically told us all to improv anything we want and write anything we want, we could create our own characters. So the Mickey that was in the script that was sent to me doesn’t even exist anymore. I rewrote it along with [screenwriter] Eron Sheehan.

Did everyone do that?

Biehn: Some more than others.

Did you create the back story of losing your family and the whole 9/11 thing?

Blanc: That was created by Michael and Aaron and then they were using photos of me on the set but I was never initially filmed at all. Then Xavier and I just hit it off so much he just asked me to play the dead wife, just happened to be up there to film it.

Biehn: We shot a whole scene where I explain that I was one of the first responders on 9/11 and went into the buildings with my crew. The building came down and I was the last person standing, and it totally screws him up and he ends up not being able to handle it, drinking, losing his family and becoming a recluse.

But then it was filmed and some things are better when they’re just kind of hinted at, so that scene could’ve been in the movie but it’s a long enough the way it is. But I basically wrote that scene. Michael Eklund [Bobby] did for his role too, he created his character out of thin air, improvising stuff then writing it and then redoing it and so on.

So we started with this script that was in flux, somebody would improv and all of a sudden the story would be over here. The next day we’d come in and while somebody was doing their scene, somebody else would be doing improv of something over here and Xavier would like it and want to shoot it. And then the first actor would get pissed off because this was his day to do his big scene and they end up shooting Michael Eklund on a fucking bicycle, and suddenly the actors started fighting each other.

People ask me about Jim Cameron and Billy Friedkin [who directed Biehn in 1995’s Jade, with David Caruso and Linda Fiorentino] but there was more tension on this set than any other movie I’ve worked on. The actors hated each other.

They hated each other to the point where I thought there was going to be physical violence. Producers were being called to the set constantly, two or three times a day because of arguments and fights. It was nasty.

People have asked me if it’s hard to play a character and leave it there at work and I always says ‘no, it’s easy, you get mad at things and then you go home’, and in playing Mickey in this movie I didn’t really have to take sides because I was on my own but I’d go back at the hotel and these actors were sitting around saying ‘that motherfucker!’ about each other. People were angry.

How bad did it get on set?

People were complaining about the physicality that was going on in the movie, absolutely.

Obviously that made a much better result on screen though? Were you glad it happened?

Xavier knew all along what was going on and I think most of us felt it was good for the movie. But I think there were a few people that didn’t know what the fuck was going on.

Did everyone bond at some film festival or something a year later?

The two people that I really thought had the most animosity I heard ran into each other in a coffee shop and they were okay with each other. There was no showdown. But I’m telling you it was nasty. It was a fucking nasty set.

Mickey kind of started off a bad guy but there was definitely an evolution. Was that there on the page?

Even at the beginning I was thinking ‘you guys wouldn’t be alive if it wasn’t for him’.

That was my point of view. Thank you very much.

Biehn: He’s an eight year child. He’s a very, very brilliant director. It’s the best ensemble cast that I’ve ever worked with that he got these performances out of, and ensembles don’t always work out. I mean, there’s all these guys in Tombstone but Billy Bob Thornton didn’t have a chance to shine in it, a lot of people didn’t.

We often don’t see your sensitive, retiring, shy side on screen. How close to the real Michael Biehn was the character of Mickey?

Biehn: He’s not really like me at all. I’m a little bit more like the character I wrote for The Victim. Mickey’s a racist, rage-holic and domineering type of person. I got a little bits and pieces.

Blanc: He’s not a racist but he’s got a little bit of the domineering side.

Michael: I’m not a survivalist, although I am very frightened about what’s going on about in the world these days. But I’m not a weapons guy and I probably never would’ve had the strength or ability or bravado to be a fireman or a police officer.

But a lot of your roles are very masculine and brash and forward.

Michael: They are. A lot of my roles are like that but I’m a lover not a fighter.