Skip to content
December 17, 2014 in Moviehole See more stories from this title 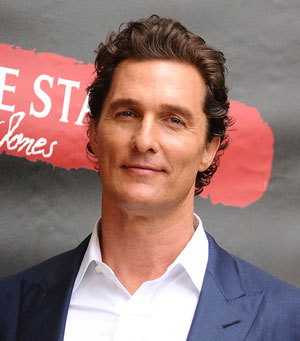 It’s been called The McConaissance. Matthew McConaughey burned hot and bright after roles in A Time To Kill, Amistad and Contact, but after awhile the 45-year-old Texan just settled for hot.

He spent a decade languishing in glitzy, romantic romps about wedding planners, dating and lost treasure where his pecs did more acting than he did.

Then McConaughey told his agents to stop sending him the same rubbish. He reminded us all he could act in The Lincoln Lawyer, then went further, seeking out dark material like Killer Joe and Mud.

When the world was getting interested in McConaughey again he delivered the sucker-punch of Dallas Buyers Club, winning an Oscar and making us forget his days of leaning against Kate Bosworth, Sarah Jessica Parker and Jennifer Lopez on posters flashing his trademark smirk.

Now firmly back on the serious A-list, he travels outward and reaches inward to play an anguished father who sacrifices everything to save the world in Interstellar.

If you had to travel into space with Anne Hathaway in real life, would you get along?

Yeah, I think we have similar bottom line value wise. We’ve spent a little bit of time off the set, and we’ll know each other a lot better in about a month. She’s a better singer than I am.

Now you’re a Dad yourself how would you feel leaving your family?

Would I have been able to before I had children? I think I could have. My first meeting with Chris was about family and fatherhood. I now know it has a lot to do with what I felt when I read it, I saw how I can have an original take on it and how it could be personal to me.

You played a very different guy in a similar movie (Contact, 1997). Did this rekindle an interest in cosmology?

I got to sit down with Carl Sagan for a few hours for Contact and it was very mind opening. I had similar talks with Kip Thorne [Interstellar scientific consultant] and my favourite thing was figuring out all the rules. Major sets we spent days on all have different rules as far as gravity and time, so I’m much more interested in it now, the idea that it’s all much more obtainable.

But any talk you have with an astrophysicist is all about the possibilities, and every one opens up more of them.

It’s also about stuff we can’t explain. How did you respond to all that?

If you look at choices we make through intuition, faith or love, they’re based on something we can’t scientifically prove. We can’t really measure it but is it real? Absolutely. Does it cause action? Sure. That’s one of the great mysteries. I actually think that’s the practical pursuit of science. I don’t think we’ll ever get there or are supposed to get there.

What’s the biggest thing you took away from the story?

The fact that mankind has expectations in ourselves. The further out there we go, the further we get from that inner person to understanding our relationships. You have to leave all you know. I understand my country, my family and everything else much better when I leave it and look back from another point of view.