Skip to content
May 14, 2013 in The Australian See more stories from this title 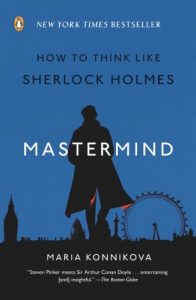 Ever seen the famous gorilla suit video? It’s a famous psychology experiment to show how inattentive we are to extraneous detail. Don’t read too much about it before you look it up online or it will spoil the surprise, but you’ll be astounded at your failure to see something so bizarre right in front of you.

Such ability to look at things differently is of course what makes Sherlock Holmes so popular, and he’s the basis for psychologist Maria Konnikova’s pop psychology book.

She uses Holmes to show how the brain works and how we can train ourselves to think like him, giving her work an extra dimension to state her case. Presenting the metaphor of the brain as an attic, the book explains how deciding what to keep and how to sort, store and retrieve it can make you as observant and deductive as the eponymous detective.

Based on the title and cover blurb, the book’s approach might seem a bit ‘self-helpish’, and Konnikova’s overarching theme to achieve it is a fairly constant effort to quiet the mind, but whether or not you want to be able to think like Sherlock Holmes it’s wonderful food for thought if you’re the least bit interested in cognition and brain science. There are a host of fascinating takeaways about cognition, memory and deductive reasoning.

Konnikova’s writing style is conversational and alive, but it can get a bit dense when she describes the psychology experiments to support her claims. Many of them seem too complex to translate to the printed page, and simplifying terms a bit here and there would have helped.

There’s an occasional tendency to over-explain but her assertions are all backed by solid research and you’ll learn the most delightful terms from the science of psychology such as ‘representativeness heuristic’, ‘functional fixedness’ and ‘probabilistic incoherence’.

Some of the wisdom is actually stuff you’ve always suspected about your own mind. Despite the input-heavy world we live in, our minds are not built to multitask (as the gorilla suit experiment proves). We’re wired to pay attention to a single discrete task at a time, no more. It’s also proven by science that distancing yourself from a problem – either physically or temporally – will better prepare your mind for solving it, the answer maybe even popping right up in front of you from nowhere.

It’s an idea that leads to one of the most astonishing properties of the brain the book talks about – it works by itself without ‘you’ being there. In fact there’s a lot in Mastermind about how our sense of self is a slave to the way the physical brain operates. Your mind isn’t really the ‘you’ you can feel inside, it’s just another tool like your eyes or hands with a job to do. It just happens to take much more practice and effort to make it work the way we want it to than simpler organs need. Often we have to game or ‘trick’ the mind altogether.

The brain attic analogy is also a good way to convey one of the ultimate mysteries of the mind – memory. We know memories are distributed, that if you take the ‘storage’ tissue from the brain of a rat after it solves a maze it will solve it again, albeit on shaky legs. We also know memories are unreliable. As one of the book’s best lines says; ‘At any given moment, you only think you know what you know. But what you really know is what you can recall’.

We all know a sunny day puts us in a good mood, but you’ll be amazed at the extent to which ‘priming’ reorients and affects our state of mind – everything from the weather to the moods of those around us, the colours they’re wearing and a million other details.

Or there’s the marvelous fact that we often solve insight problems better when tired or drunk because our executive function is less inhibited about what it filters out.

To Konnikova, training yourself to think like Holmes is just that – effort and practice, no different from what you do for your body in a gym. Our default mental ‘resting’ state is to be thinking about nothing, letting our minds wander. Anything we pay attention to is an act of conscious will, and deciding what to look at and which way to look at it, she contends, will make us just like Sherlock Holmes.