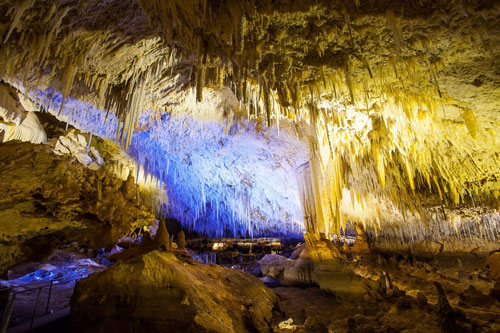 Last year, the Margaret River & Districts Historical Society was in possession of a certain intricately hand-sewn dress over a hundred years old.

It betrayed the stature of a diminutive woman barely five feet tall — not the sort of pioneer you’d expect braving the Australian bush.

But Ellen Bussell, of the first settling family on the Southwest Cape, wasn’t an ordinary pioneer. She not only worked the land at Ellensbrook (the family farm named after her) and cared for a husband and nine children (who survived from the original 13), but provided a classical education for her children.

Daughters Fanny, Grace, Edith and Charlotte were accomplished horse riders and pianists, and were renowned for their beauty and intelligence.

But it was a lucky escape by eldest daughter Fanny that uncovered one of Margaret River’s most stunning attractions.

Fanny had made several references in her diaries to her ‘little calves’, a small group that she made her pets. It’s believed that she was out looking for one that had gone astray on the fateful day in the 1860’s when her horse stopped dead in the bush.

Fanny found herself at the lip of a yawning crater filled with weathered stalactites and fallen boulders, some fifty metres across and plunging thirty metres deep.

Her horse had, whether by instinct from a change in the vibrations beneath its hooves or by sight, stopped literally inches from the edge.

Fanny – searching the surrounding bush for her calf – hadn’t even seen it.

She returned home excitedly to tell her parents but despite further searches, Lake Cave (as it’s now known) remained hidden for a further thirty years.

Tim Connelly was the first man to lead an expedition into the opening at the foot of the crater in the late 1890’s, and the cave was opened to the public in 1901.

At the time, guides encouraged visitors to handle surfaces (which irrepairably stained surfaces black from the oil of people’s skin) and break off stalagmites for ‘souvenirs’ that had taken tens of thousands of years to grow.

But despite the shameful early lack of conservation, Lake Cave, along with the other Margaret River region cave systems, are still some of the most awe-inspiring artworks of nature to see in the state.

But nature hasn’t only provided attractive sights in the Margaret River — it constantly creates a world-famous playground.

You might think the quintessential Margaret River travellers are inner city Perth couples collecting samples from the wineries, cheese and chocolate factories to stock their larders.

Wet Dreams is a world-qualifying event that’s grown over the years since its launch in 1985 and is now watched by millions of viewers in 48 countries.

“Compared to other venues around the world circuit, it’s extraordinarily clean and pristine.” He says, “there’s just a clean smell in the air everywhere.”

A veteran of the circuit, Carroll remembers Margaret River from his first tour in 1978. “It was just an old logging town. The wine industry was kicking off at about the same time I first travelled there and it’s obviously brought about a new consciousness.”

Carroll describes the surf itself as powerful. “It’s one of the most ferocious systems in the world,” he says, “the roaring forties bring in some huge swells. It’s very consistent and best in the mornings before the winds cuts it up a bit.”

Describing an area he liked so much he once owned land here, Carroll is one of the vets best qualified to talk about how Margaret River has changed. “There’s a lot more people now, obviously. You can’t help that when a place gets touristy. But the town itself is still pretty small so the area still has a small-town mentality that’s nice.”

And it isn’t just the vets who love the strong surf and atmosphere. Recent Champion Mark Bannister also mentions the prestige. “It’s definitely got more power which makes it one of the best.” He says.

Bannister, whose favourite beaches are in unlikely places like France, still has a soft spot for Margaret River, despite the comparitively exotic overseas locations his living has taken him.

“The town’s changed for sure,” he says, “there’s a lot more housing and development. But there’s still a country feel and of course there’s great food and wine around there now.”