Skip to content
July 3, 2011 in The West Australian See more stories from this title 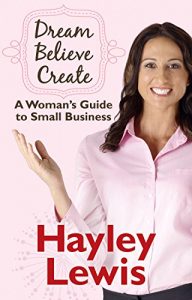 You can’t really ask the perennial questions ‘whatever happened to’ about former Olympic swimmer Hayley Lewis, she’s been in the public eye lately as a host on The Biggest Loser. But to many she’ll always be the fresh faced 15 year old who swam her way to medal victory at the 1990 Commonwealth Games in Auckland and the 1992 Olympic Games at Barcelona.

Still, behind the sweet-faced grin and sporting glory Lewis had two ambitions she never thought much about at the time, but which she’s been able to combine since. The first is starting a small business (a swimming school in suburban Brisbane), and the second is that she’s written a book inspiring other women to follow their own small business dreams as she has called Dream, Believe, Create.

With the phrase ‘peaking too early’ in mind, I reminded Lewis that there are far more authors and small businesspeople in the world that Olympic medal winners. Isn’t this all an anticlimax? “No, I was given the opportunity to train hard and eat the right foods to be a swimmer. But I think I swam because I just kind of clicked to it and the competing and training all just fell into place,” she says. “I knew swimming was something I could do but it wasn’t who I wanted to be when I got older.”

And while sportspeople and fans the world over watched Lewis’ career with pleasure and envy, her own admiration was directed somewhere very different. “I’ve always been in awe of people who have their own businesses. It always struck me as being quite amazing, the ability to start something from scratch and do it yourself.”

It took a good deal of courage and maturity for Lewis to take the first step, as she explains — brave enough for someone who’s already retired from the activity that defines them in the public eye. But her environment played an important role that she had to rise above. “I was bought up in a family where you just didn’t have your own small business,” she says. “It was seen as a risk, beyond what our family was able to do. So I think it was always a goal of mine to prove to my parents you can actually go out on your own.”

While she ambition of being an author, Lewis never dreamed she’d be writing a book like Dream, Believe, Create — about achieving small business goals. “I thought my first book would be on swimming or motivation or something like that,” she says. “I’m more surprised than anyone to have bought out a book about business. It’s one of those things I’m constantly learning from day to day.”

And with so many feathers in her hat these days, it must be a juggling act to know where to apply her energy the most. But Lewis knows where her bread’s buttered when it comes to her personal drive and satisfaction. “I didn’t have a passion to be on TV, ever,” she says empathically. “I was in the right place at the right time and when the opportunity came up I happened to tick all their boxes. If I got a phone call tomorrow saying they weren’t doing The Biggest Loser anymore I’d be disappointed but TV isn’t the be all and end all of where I’m going.

“I started writing Dream, Believe, Create and gave a couple of chapters to the guy who manages me. He passed it to my publisher and it went from there. After that I started really enjoying the writing process. It was quite cathartic and it was the first opportunity I think I’ve ever had to not run around everywhere and be in a million places because I actually had to sit down and write it.”