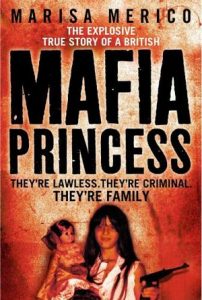 “Even though sometimes you’re like cats and dogs and not getting on I miss my family,” says Marisa Merico from the UK when The West spoke to her recently. Merico could be any other single mother in her early forties estranged from an extended family overseas whom she never sees any more but misses terribly.

But it’s not the distance, the lack of money or want of trying that separates Merico from her beloved Dad, her Nan and the extended clan of aunts, uncles and cousins she used to spend her life with in Milan. Merico’s father Emilio DiGiovine was one of the biggest and most successful mafia kingpins in Europe in the 70s and 80s, filling family coffers with millions from running everything from cigarettes to heroin.

With his mother (Merico’s ‘Nan’), DiGiovine was an instrumental member of the ‘Ndrangheta, or Calabrian Mafia. Merico’s mother, a chambermaid from Blackpool, fell in love with the urbane Italian and bore him a daughter before she knew the full extent of organised crime and killing he was rising through the ranks of. Heartbroken at his constant affairs, Merico’s mother left him and returned with her young daughter to the UK.

But Marisa was inextricably linked with one of the most powerful mafia families in Europe, and after watching her extended family crumble, face charges and prison time and even serve two prison terms herself, she tells her story in Mafia Princess, out now.

After taking her baby daughter across the Swiss Alps with her father smuggling contraband cigarettes, Marisa’s mother tried her best to protect her from the life that awaited Marisa in Italy. But while the book is full of stories of high living, fast cars, opulent apartments, parties and briefcases full of cocaine, the thing Marisa talks about the most is the ties that bind.

“If I miss anything it’s having a good family and that feeling of belonging,” she says. “It was never really about the money or the privilege for me. Of course it’s nice to have but it bought so much heartache.”

While plenty of fathers are absent from their kids’ lives for long periods, it’s usually because of demanding jobs instead of the need to criss-cross Europe orchestrating escapes from prison or evading authorities. Merico spent years at a time waiting for contact from her father, and all the money, respect and power couldn’t make up for the day he took her into the Calabrian forests and taught her how to shoot a rifle. Questionable parenting aside, it was when he whispered to Marisa that she was his ‘piccola principessa’ (giving the book of her life its title) that she describes being the happiest.

In fact, when The West asks Merico about the best party she remembers, we expect a story about a ski resort in the Swiss Alps, opulent ballrooms and powerful men surrounded by kept women. Instead, her thoughts were still with her father, who wasn’t even there. “It was in 1991. We’d all gone to the seaside and at midnight we got a call that my father had arrived safely in Spain after escaping from prison. The people involved with his escape were all there and we popped the champagne at midnight and had a really great time.”

But just like Mafia lore from pop culture tells us, the good times can never last. In the early 90s, Merico had fallen in love with a mob driver and fallen pregnant to him. His recklessness saw him imprisoned while their daughter was still a baby, and soon after, an Aunt in the family turned state’s evidence and told police everything.

They descended on the family and put most of them (Merico’s Nan included) behind bars. Merico escaped with her daughter back to the UK, but her past wasn’t finished with her. She arranged for her car and some of the loot to be smuggled out of Milan and prepared for a new life bringing up her infant daughter alone.

When 1994 saw the UK’s Customs and Excise launch Operation Matterhorn, Merico was sentenced to prison for living from the proceeds of money laundering. Ironically considering her family’s business, Merico says serving several years in England’s notorious Durham prison was her most frightening experience. Among her fellow inmates were the infamous British serial killers Myra Hindley and Rose West.

“When you’re outside, there’s a way out of you want it,” Merico recalls. “My family protected me. When I got married I didn’t even realise rival gunmen were planning to shoot up my wedding to get my father. I found out later, but I was so protected I didn’t even know about it.”

A second brief marriage with a fellow inmate ended in tragedy. After both were released, Frank — after whom their son is named — fell back into his shady ways and was shot and killed in the back streets of Leeds, leaving Merico alone and expecting her second child.

Since then she’s enjoyed a somewhat quieter life, raising her kids and looking after her ailing Mum. But the story of the Mafia Princess isn’t over, and as we spoke Italian authorities were orchestrating Merico’s extradition to Italy to serve a further sentence. Now forty and with little education or prospects, Merico hopes to fight the action. “I’ve told my lawyer I’d be happy to do community service to repay what I’ve done,” she says, “just so I don’t have to be taken away from my kids and my mum.”

The Australian imprint of the book features a photo of Marisa aged 11, taken by her mother. In one hand is a doll with a pretty ribbon in its hair and in the other is a loaded gun, one she says her mother didn’t know was real. It’s the perfect image to sum up the two worlds struggling for a young girl’s loyalty, and as a middle-aged woman she’s still paying the price.