Skip to content
December 19, 2006 in Xpress See more stories from this title 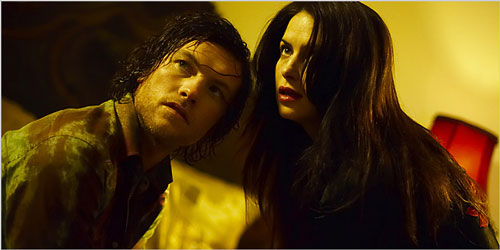 If you’ve seen 10 Things I Hate About You (starring that other famous West Australian actor), you’ve seen Shakespeare. If you’ve ever watched a Woody Allen film, you’ve seen some of Shakespeare channeled — he laughed at the silly foibles of the human heart centuries before the world’s most famous neurotic.

If you’ve watched a film, read a book, been to a play or watched TV news any time in the last millennia, you’ve digested the core set of themes of the human condition Shakespeare identified and wrote about; the corrupting influence of power (MacBeth), the bittersweetness of love (Midsummer Nights Dream) or revenge (Hamlet).

Actors from Mel Gibson and Kenneth Brannagh to Keanu Reeves have gone purist bringing the Bard to fans, appearing in productions set in the historical period Shakespeare intended — the latter in a Canadian stage production that sold out to mostly teenage girls.

But as plenty of directors and stars (to say nothing of movie fans) know, there’s no better way to align audiences with the classics than to dress them up in contemporary settings with cool characters — even eschewing the ‘wheretofore’s’ and ‘thou dosts’ of Shakespeare’s thickly poetic language and sticking to the themes alone.

Geoffrey Wright, who’s inexplicably only done two movies since 1992’s Romper Stomper, puts Shakespeare’s tale of power and paranoia in the Melbourne underworld, and he sticks to the script. The result is a visually tantalising and striking blend of black leather coats, Uzis, action and mobsters all speaking hardcore Shakespearian. If you’re not familiar with the play you’ll have to make do with a sense of what’s going on instead of following the dialogue completely, but it’s still a sensory blast.

The heroes of the Scottish wars of independence become drug bagmen in the employ of a powerful mob boss (Sweet). As MacBeth, Worthington is a rising player in the syndicate, and at his wife’s lustful urging and the prophecies visited him by three mysterious schoolgirl witches, he plots to take over his violent world. As anyone who’s studied drama or been through senior high school knows, he does so at the expense of his friendship, self-respect and eventually his sanity.

Graphic, rich and sensual, it’s a little disconcerting at first to see talented Australian actors waxing lyrically, but everyone inhabits their character well and liberal doses of nudity, gunfights and bloodshed will please fans of cinema who wouldn’t normally find Shakespeare so accessible.