Skip to content
May 23, 2015 in Cosmos See more stories from this title 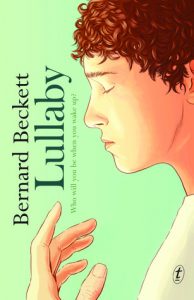 New Zealand author Bernard Beckett’s biggest strength as an author isn’t so much conveying high-minded sci-fi concepts to his usual audience of young adult readers, it’s the strength of his concepts to begin with. The ideal primer for his work is his 2005 novel Genesis, which raises a grand philosophical theme before a final-sentence twist that shines incredible new light on everything that’s come before.

For awhile, his new book Lullaby might make you think he’s moved away from any sci-fi elements (Beckett himself doesn’t consider his work primarily sci-fi), but at around the page 60 mark he reveals that you’re living in another exciting world of incredible technological possibility.

A teenage boy named Rene sits with his identical twin brother Theo in hospital, the latter in a coma he likely won’t awaken from. Rene is taken away and interviewed by psychologist Maggie to determine his emotional suitability for a procedure that’s hinted at but not explained until the big reveal.

Through talking to Maggie and reminiscing inside his own head, Rene imparts how he and Theo used to play a game on friends and peers – sometimes for days at a time – where they’d dress as each other and ‘play’ the other brother. Unknown to Rene until he sits down with Maggie to relate it, it was a process of testing the fluidity of individual identity – a motif that becomes the theme of the book.

The jaw-dropping moment comes when a doctor talks about the futuristic procedure under consideration. Because Theo’s neuro-connected mind rather than his physical brain is damaged, a scan of Rene’s brain can be taken and implanted in his brother’s head.

Theo will awaken perfectly healthy but with a virtual copy of Rene’s memories and sense of self living inside his body – prompting the question of just what identity means when it’s not so immutable. It’s particularly exciting to see a recent scientific concept like the connectome used so beautifully to drive dramatic tension and ask big questions.

The narrative construction doesn’t revisit the science behind the idea very often – most of the book concerns Rene’s melancholy and false bravado as he tries not to let on how lost and scared he is to the understanding but firm psychologist. But it provides a thrilling backdrop and in Beckett’s usual style, it makes you question everything you know about the topic at hand.