Skip to content
January 25, 2009 in The Sun Herald See more stories from this title 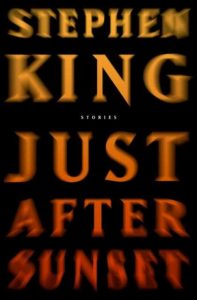 First published in 1974 with Carrie, Stephen King has now been in print for 35 years, long enough to be a bona fide literary veteran. Even more interesting is that in Just After Sunset (his fifth short story collection) we get a chance to appreciate the timelessness of his work.

All good writers know the story transcends the period, and there’s always been something about King’s style that seems fixed in an indistinct past, somewhere between a meta-1960s and no time at all. Most of the stories have been written in the 21st century — as he explains in the notes he provides at the end of the book – so the characters live in the age of Blackberries, GPS and online shopping. But all that’s just the backdrop. He’s interested in human nature, how people behave when they’re scared, grieving or in pain.

He’s interested in what they’re thinking when they’re locked in a used port-a-loo by a murderously feuding neighbour (A Very Tight Place), or when the miscellany of people’s lives turns up in a protagonists apartment after they died in the World Trade Centre attacks (The Things They Left Behind).

As he explains in the introduction, the return to the short story was a rediscovery for him, and where many of his novels throughout the 90s were about themes, Just After Sunset is more like his most recent novel Duma Key, which marked a thrilling return to the supernatural for him. In Just After Sunset, plots turn on what he calls ‘small crucial details’ of stories. That means some of them are the simple, neat little ghost stories he used to write like the affecting Willa and the eerily touching The New York Times at Special Bargain Rates.

But like much of his work of late Just After Sunset contains strong themes of mortality, sickness, injury, death and grieving, topics obviously still close to his heart after a van ran him down in 1999 and left him with a long and painful recovery. N, for example, is an homage to Arthur Machen’s The Great God Pan. It’s about an abyss of terrible other worlds beyond our own, but told by characters for whom madness is a kind of disease, moving from one to the next, causing obsessive compulsive disorders and eventually driving them to suicide.

So Just After Sunset is really a tale of two Kings. The first is from before the accident when he was content to talk about possessed machinery and monsters like he does in Gingerbread Girl, about a woman’s desperate bid to escape the clutches of a sexual predator and killer.

But the other King is present too, the one who wants to explore the dark corridors of his heart in the face of his advancing years, fears for loved ones and delivery from suffering. One of the tales — Rest Stop — is about little more than a man trying to muster up the courage to step in when he overhears a redneck beating his girlfriend in a highway toilet block in the middle of the night. There’s nothing ghostly or supernatural about it but the ominous tone of rising fear ensures it belongs in a horror collection, and it’s one of the stories King writes as catharsis where he can imprison nasty ideas in his imagination or give them the resolution he wishes he could have in real life.

If you’re a King fan, you’ll enjoy every story in Just After Sunset. Out of 13 tales, there’ll probably be one or two that fail to make a big impact on you, but together they comprise the sum total of the writer he’s become after so many years. After wandering something of a creative wilderness in the 1990s it seemed King had left his best work behind him, but he’s found his former showmanship and, like one of those shoddy mannequin zombies outside the ghost train, promises fans and former fans scares for fun if they come inside…