Skip to content
August 18, 2005 in Xpress See more stories from this title 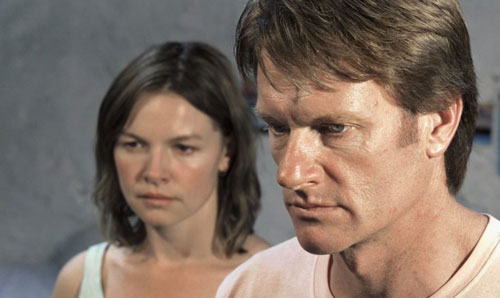 Compare Three Dollars to You Can’t Stop the Murders. Lantana to The Wannabes. Somersault to You and Your Stupid Mate.

See the pattern developing? Despite criticism about the narrowly-targeted, tits/guns/fights movies for teenage boys that flood the world from the US, they have a hugely diverse independent scene that occasionally breaks through the constant spin doctoring of the Hollywood studios (The Blair Witch Project, Sideways, Clerks).

The much-commented on doldrums of the Australian film industry can be attributed partly to the fact that we have only two distinct cinematic voices. The first is the private consortium of free to air and pay TV stations that fund and produce the same sort of unfunny sitcom drivel we see on TV, extended from 30 to 90 minutes.

The second is the sum the federal government grudgingly gives film funding bodies that it’d rather be spending invading countries America doesn’t like. Aside from a few guerilla film lovers who max out their credit cards and happen to have a publicist’s phone number at a sympathetic distributor, that comprises Australian film output almost in its entirety.

How is this related to Look Both Ways? Every now and then a film comes along that stands head and shoulders above both narrow moviemaking streams and hits you full force.

Even though writer director Sarah Watt’s feature debut has in fact come through the political minefield of the Film Finance Corporation, we haven’t seen a film that’s broken out of its monetary or technical constraints since Lantana, and it’s no wonder both films are already being described in the same sentence.

An ensemble of performance and character, it’s quite simply wonderful. Taking strong cues from everything from Lantana to Pulp Fiction (where we follow the lives of a large collection of characters with varying importance to the story) it’s not a new idea, but where a film of the genre can shine is in its handling of the details.

Look Both Ways is wonderful firstly because it hardly ever falters, telling us the story of each character with confidence and realism, showing us the hidden fears and hearts against a backdrop of how people really behave. The story isn’t particularly exciting — it depicts a single sweltering weekend in South Australia and the fears and concerns of a selected group of people — but the performance and the heart of each actor and character carry you all the way.

At the top tier is newspaper photographer Nick (McInnes) and commercial artist Meryl, whose lives are thrown together by fate. At the next step down are Nick’s journalist partner Andy (Hayes), his girlfriend Anna (Flanagan) and Nick and Andy’s boss Phil (Gilbert). Below them are Julia (Farinacci), the subject of Andy and Nick’s latest heartbreaking assignment, the train driver who changes her life irrevocably, and Nick’s Mum Joan.

Look Both Ways shows them all dealing with their personal ideas and fears of mortality in some way. That sounds like a very sweeping assessment to describe a film, but Watt handles it all with such subtlety, emotion and class it’s hard not to get swept up in it.

It also makes the film sound depressing and miserable, being fixated on death. Instead, it’s quite beautiful, dealing with people like we all are; scared, lonely, just wanting someone to share it with. And it never treats its characters or subject matter lightly despite being light on its feet, not resorting to jarring comedy to lighten things up where it’s not needed.

There are stumbles. For one thing, there are a few too many montages by music, and not everyone will like the little cartoon and photomontages that depict Meryl and Nick’s thoughts. But when the movie offers so much more, they’re easy to forgive.

The cast is uniformly perfect for their roles. After years in the acting wilderness following her formative stint on Home and Away, Justine Clarke has edged warily back into screen acting with supporting roles in Danny Deckchair and Japanese Story, Look Both Ways her first title role. She’s a revelation, combining angelic innocence, childlike vulnerability and a sort of everywoman beauty, never giving much away except for perfectly timed glances and subtle mannerisms.

And McInnes, from TV’s Seachange, captures a fascinating blend of chiseled leading man and guy on the street likeability few actors get right.

It might be dire straits for Australian films, but more movies as good as Look Both Ways will change things.