Skip to content
October 21, 2003 in The West Australian See more stories from this title 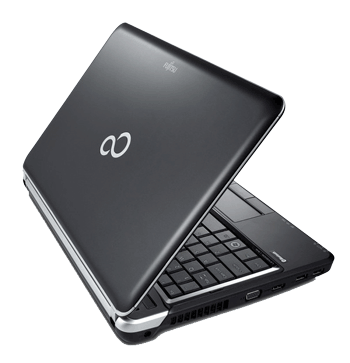 Fujitsu’s aptly named Lifebook series of notebooks are living up to their name … they’re consistently among the most stylish, comfortable mobile computers on the market.

This time, as well as stepping away from the blockish conventions of the notebook world, they’ve moved away from the whole idea of a notebook computer altogether. A strange, unwieldy-looking beast at first glance, the Lifebook L2010 turns out to be an almost perfect marriage of everything you love about mobile computing with everything you miss about desktop usability.

In its steady state, it’s not a flat machine like a typical notebook that closes into a slim, neat package. In fact, the one limitation of the shape is that you can’t tuck it neatly into a PC bag. Grasping it by the handle at the back of the screen, you’ll think it’s far too heavy (at nearly 5kg) for an on-the-road mobile.

The screen stands up from the base that contains the battery and some seriously heavy-duty speakers, the keyboard attached to the front. In its rest position, the keyboard folds up to rest against the screen, showing just enough of the picture to display your playlist (if you’ve got a CD on) or a digital clock.

Suddenly it takes on the air of a machine that wouldn’t look out of place on the dashboard of a space shuttle, and the novelty doesn’t end there. Insert or eject a DVD, CD or CD-R in the combo drive slot on the side of the screen and you’ll feel like James Bond copying top secret deep in the villains lair as the Lifebook sucks it in or spits it out.

A cordless mouse is standard, although there’s enough USB slots to attach a normal one. And if that isn’t sexy enough, you can detach the keyboard and use it wireless as well. The pointer on screen is a bit jerky over infared and takes some getting used to, but the range is amazing — still working when you’re too far away to even read the screen.

All that said, it’s a very basic machine as far as performance grunt, so don’t be fooled by the groovy casing into thinking you’ve got the best notebook on the market.

It is cheap, and it comes with everything you’d usually get for the same amount of money in any other mobile. With a 1.8GHz AMD chip and 256Mb of RAM (the maximum is 768Mb), it’s hardly future proof — in fact, depending on your needs it might be a bit behind the times for you as soon as you unpack it.

There was a noticeable slowness even in tasks like opening windows or copying files, and it didn’t multitask well, freezing when asked to do a number of things at once that shouldn’t be a stretch for any computer nowadays.

The battery is obviously fairly robust, and not just because it takes up considerable weight in the base — nearly four hours passed before the first low power warning, and that was after some high-end graphics work, low maintenance office tasks, burning a few CDs and watching 45 minutes of DVD.

Where it is future proof is in connectivity. There’s a Bluetooth card option, heaps of ports (including two USB, Firewire, memory stick card), internal modem, 10/100 Ethernet port and wireless LAN (802.11b) compliance.

For a pro on the go or your average student/researcher who doesn’t need more than a few office applications and decent net access but no real plans to expand operations, you’ll pay a great price for a slick, imaginatively-designed package. But if you’re going to need heavy gaming or graphics power, the Lifebook L2010 might be a little low on performance specs.

Either way, you’ll be the talk of your office with this groovy little number.