Skip to content
July 1, 2004 in Filmink See more stories from this title 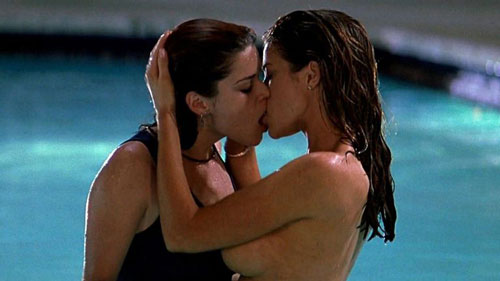 After trying and failing repeatedly to get an English printer to take on the production of Lady Chatterley’s Lover, DH Lawrence finally secured the services of an Italian company, where social mores towards the content of the novel were a bit more liberal.

Upon reading the manuscript, the print shop manager’s first question to Lawrence was “Senor, why do you want to write about it? Everybody’s doing it?”

The same could be asked of modern cinema. From Barbara Taylor Bradford miniseries to Debbie Does Dallas, popular filmed culture is awash with depictions of lovemaking. And despite the fact that it’s going on between millions of couples worldwide at any given moment, we never get tired of watching it in movies.

As the old axiom so succinctly puts it; sex sells. Remember the lurid advertising for movies like Basic Instinct and the irascible Showgirls?

Your film might not be a B grade sex thriller, but sex scenes have been a driving force in every filmmaking genre, so most directors (and actors) face them eventually.

What’s amazing is that for something that’s so natural a part of our lives and so exhaustively portrayed on screen, it’s only by trial and error you can learn how to do it. Even then, every project will be different — just like every lover (and bout of lovemaking) is different. There are a dozen courses in Australia that can teach you how to use an editing suite, but none that show you how to act out an orgasm (except repeat viewings of When Harry Met Sally).

The first decision you have to make about a sex scene is; do I really need one? Like expensive special effects, it’s very tempting to include sex even when it doesn’t add to the story. And there’s nothing worse to an audience.

Director Jonathan Teplitzky — whose feature Gettin’ Squared scooped the nominations pool at both the 2003 AFI and IF Awards — appeared on the scene with 2000’s Better Than Sex. He cautions against using a sex scene for padding.

“People like the idea of having sex scenes in movies,” he says. “But it depends what they’re about. There’s nothing more gratuitous than a tacked-on sex scene — maybe more so than violence. If it doesn’t really have any meaning and you don’t believe the characters would get involved in it, audiences sort of turn off.”

So when you’re sure sex has a place in your script, you’re eventually going to have to film two (or more) people pretending to have sex; undressed, surrounded by lights, camera, microphones and crew, possibly a world away from feeling sexy or aroused. Are there tricks? Do you have to give them x-rated fiction to read in the makeup chair or play endless Kylie videos on set?

Or do you just give them the script, say ‘action’ on the day and expect their professionalism as actors to take over?

Susie Porter knows something about performing sex scenes — she’s done so for Feeling Sexy, Better Than Sex and Monkey’s Mask. She thinks filming great sex takes a blend of being a professional and understanding. “I’ve never worked with a director who’s been inconsiderate or unfeeling,” she says. “And if they’ve got any brains directors aren’t going to make you feel uncomfortable if they want you to do the best possible job.”

In real sex, the most important thing to get right is your communication. Shooting sex scenes is no different.

Despite the glamourous Hollywood view of sex — that it’s all the more exciting when there’s an insane killer stalking us through the forest or we’re surrounded by the villain’s henchmen in a crippled jet, most of us know that sex rarely works if we’re not comfortable. Similarly, you’re not going to get a very realistic performance out of nervous actors, so you have to put them at ease.

Firstly, it’s for the good of the project. As Jonathan Teplitzky explains, there are as many ‘moods’ in movie sex as there are movies, and you don’t want someone to look like they’re having the time of their life if your film is about an unappreciated housewife. “You have to be honest and straight with [the actors] and say ‘this is what I want to do’ and with that communication, everyone goes into it knowing what’s expected of them,” he believes.

“Once you’ve been shooting nudity and sex for a couple of days, like in Better Than Sex, people start to relax, and that’s not something you can implement. You should never underestimate the need to make performers feel safe, comfortable and well protected.”

“Communication is the key not just with sex scenes but with every film in any situation. You’re trying to open up communication between you so there’s more potential for wider exploration.”

And your performers don’t just have to be comfortable they’re doing the script justice, either. If they know what the sex scene’s about in relation to the story, they’ll know where the limits are and that they’re not being taken advantage of or exploited. Make sure the set is closed and everyone in the crew knows what’s going on.

That’s important enough if you’re working with seasoned professionals, but even more so if you’re using amateur performers or friends who might not be as knowledgeable about their creative rights and responsibilities.

Michael Raven, adult movie director with California’s Wicked Films, has to direct performers who have nothing to hide and (at least some of the time) aren’t just pretending.

“Most performers are seasoned professionals,” he says, “but it’s necessary on occasion to make a ‘newbie’ feel at home, which you can do by keeping the mood light and fun. It seems to work.”

So remember; if you’re just trying to get some tantalizing glimpses for your audience instead of serving the story, you won’t be fooling anybody (unless you are an adult film director).

We’ve all seen directors in action on DVD making-of documentaries, giving instructions like ‘walk in this door’, ‘turn menacingly towards the victim’ and ‘cast your eyes down’.

Surely it’s not the same shooting a sex scene? Who could possibly concentrate on making it look loving, spontaneous, urgent, arousing (or whatever else the script demands) with a director standing off camera saying ‘thrust harder’, ‘grab her right breast’, or ‘more tongue’?

Since most of us know what real sex is like, can’t actors just get on with it from their own experience, or do they need as much guidance making love as they do using karate on bad guys?

Jonathan Teplpitzky thinks it’s a combination of both. “You discuss a great deal with them beforehand, and then you’re just helping them out. One of the scenes [in Better Than Sex] had 15 or 16 setups, and the actor understands where that piece of the action fits in. If they have trust and chemistry and you’ve set it up in a controlled and responsible way, often they can relax and more spontaneity can come out of it.”

To Susie Porter, that kind of direction is good to keep the action to the theme demanded by the script. “Sometimes it’s so technical and there are specific shots you really have to keep within,” she says. “It’s all very well to be in the moment but you can be in the moment within that structure. And because what the audience sees and what we feel are sometimes completely different, having a strict structure is quite good.”

And spare another thought for Wicked’s Michael Raven. If you’re filming sex you want to look real (or real sex, depending on your film) doesn’t it dampen the requisite arousal and ‘conclusion’ to have a director yelling specifics at you?

“That depends,” Raven says. “Sometimes it makes for a much better scene if the actors are given some latitude and freedom to perform in a manner that best suits them. Other times the scenes are performed under less ‘forgiving’ circumstances (such as in the rain or in the outdoors) and that can make it difficult shooting.”

In short, don’t approach a sex scene any differently than you would a car chase, dramatic dialogue exchange or opening titles; direct and edit it according to your vision for the film, and as long as everyone knows ahead of time what you need to get out of it, you and your actors will not only stretch all your abilities, it’ll be the sort of feather in your cap that gets people’s attention.

Sex Around the World: Cultural Attitudes to Sex in Film

“We’re similar to American and other anglo cultures,” says Jonathan Teplitzky about Australian attitudes to filmed sex, “where they tend to hide it away a bit. In Australia we’re a little more relaxed about it all, particularly the younger generation.”

Most of the raunchiest movies are from Europe. A recent magazine article about games development talked about publishers having to release multiple versions of the same game to adhere to individual countries’ censorship laws. Generally, the article said, the English-speaking world is more puritanical about sex but liberal when it comes to violence; the reverse is generally true in Europe and Asia.

Susie Porter agrees. “The French and Italians seem to deal with it a lot better than we do. Most people watching sex scenes when they’re with someone in the cinema feel embarrassed and awkward about it, because it’s very personal and they’re thinking ‘God, do I do it that way’ or ‘what’s the person next to me thinking’?”

So while that’s not a warning to tone down your sexual content for fear of upsetting anyone, it’s the main reason to make sure sex scenes add to your story. If there’s no point to the narrative, they’ll be like having teeth pulled to your audience.

One question hanging over the heads of filmmakers depicting onscreen lovemaking is whether or how to include mention of safe sex.

“It is important,” Jonathan Teplitzky thinks, “but I also didn’t want to make a big deal about it. What we did with Better Than Sex was show an empty condom packet in the credit sequence. The trick is to include such issues without it looking like a political statement, which would take you out of the drama of the movie.

“Sex is often portrayed in a very ‘romantic fantasy’ kind of way with the camera coyly tilting away from the action before anything can happen, so to address safe sex is almost impossible.”

According to everyone interviewed, there is no strict legal framework for filming sex scenes in Australia. Closed, indoor sets are only covered by normal workplace safety regulations, and public decency laws would be in effect anywhere else, so as long as you use common sense you can’t go far wrong.

Where it can get messy — in this media age of Hollywood stars suing for millions to stop before-they-were-famous topless or nude shots being published — is in knowing what comprises each party’s intellectual property.

On a professional production, the actors will sign contracts that release use of the film and any promotional stills for marketing purposes, and much of the time they’re closely consulted as to what they do and don’t want of themselves on posters, in magazines etc.

If yours is a hobby or amateur film, you’d be doing yourself and your performers a favour by drawing up at least a written agreement if not a recognized contract.