Skip to content
August 14, 2012 in The West Australian See more stories from this title 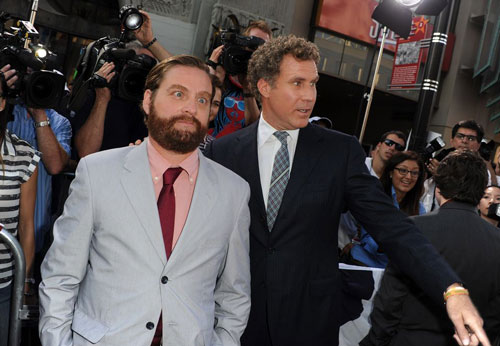 Great comic teams have been a staple of cinema since Hollywood was established, but some of them have taken longer than others to come about. In 1985 two of film’s funniest men – Chevy Chase and Dan Aykroyd – finally headlined a comedy (Spies Like Us) to great effect.

So the first thing you wonder when you see Will Ferrell and Zach Galifianakis on the poster for The Campaign is why it’s taken so long to put two of the guys who own movie comedy in the 21st century together. After his star-making turn in the Hangover movies, Galifianakis threatened to steal the Crown Prince of Comedy title, but Ferrell won’t be outdone so easily.

But before they explain why they waited so long to work together during the Los Angeles press day, The West endures some of the infamous tomfoolery we’ve been warned about when interviewing Ferrell. “Zach has been bothering me for years now, and I kept telling him I was just too busy,” he begins.

“And he told me not to keep coming to his house anymore,” Galifianakis agrees without missing a beat. “He keeps asking how I got his address.”

“Yeah, and he kept coming to my house, and at weird hours, not normal visiting hours. Three in the morning,” Ferrell says, presently turning to the matter at hand. “I loved the character Zach does in the movie, he’s done it before and he’s literally one of the funniest characters. I just said ‘can we think of a movie where we can use him? I’ll just be anybody’. At first we were just two southern guys and then Adam McKay [Ferrell’s frequent creative collaborator] said we should be duelling candidates in a political race, and we just thought it was a great idea.”

The resulting movie, The Campaign, is hysterically funny. It’s the story of less-than-squeaky-clean Senator Cam Brady (Ferrell) who keeps running unopposed until two local industrialists pit a new opponent against him in the local election to manipulate the labour conditions that will drive their profits sky high. The poor sap they groom is good-natured but simpering Marty Huggins (Galifianakis) and as the tagline says, ‘May The Best Loser Win’.

Accordingly, the second thought that occurs to you when you consider The Campaign’s pitch is just who the straight man will be. In all their films, both Ferrell and Galifianakis have been the comic foil – extreme, at-times stupid men for straight-man co-stars to bounce off. Is the screen big enough for two natural leads?

“I kind of hate the funny guy, straight guy formula,” Ferrell says. “I mean obviously it has its place, but I’ve never felt there needs to be a limited number of funny central characters. Why can’t you just keep passing the ball around? I think we were able to do that.”

“The only trick to it I think is that the characters weren’t similar,” Galifianakis adds. “We talked about making sure we weren’t playing the same thing, and I don’t think we had that problem.”

After watching The Campaign, you’ll agree both Ferrell and Galifianakis pitch the characters of Cam and Marty perfectly to compliment each other. Galifianakis endures a running gag where he has trouble getting doors open. At one point Ferrell says, with a completely straight face, ‘Filipino Tilt-a-Whirl operators are this nation’s backbone’. Both character could have his own movie and both actors make it look effortless.

Which brings the conversation around to how difficult comedy really is, and the recognition it should get as a result. Few Oscars are awarded to comedies, after all. “I do have a chip on my shoulder about that, I have to be honest,” Galifianakis says. “When it comes to drama you can just sit there but in comedy you have to hear something out of people, and that’s much more difficult.”

“But I think the reason comedies don’t get the same recognition is because when it’s done well it looks easy, it looks like we’re just messing around,” Ferrell says. “People always ask ‘how much fun were you guys having?’ Actually it’s about having countless meetings where we go over it and over it. A lot of work goes into comedy.”

Of course, Ferrell proved in Stranger Than Fiction (2006) and Everything Must Go (2010) that he can do more than make us laugh, and with writing and producing credits as well as the hit website Funnyordie.com to his name, it makes you wonder if there’s anything the one-man laugh factory can’t do… like move to the other side of the camera?

“I’d love to just direct the actors only, without any of the other work a director has to do like go to all the meetings and scout locations,” he says when asked. “It’s 84 percent of the director’s job, and it’s too much work for me. That’s why I don’t think I’ll ever direct.”

“There’s a discipline there I don’t know if I have,” Galifianakis agrees. “I’d probably do one take and go ‘yeah, we got it, good, who cares’.” Maybe the best place for both Ferrell and Galifianakis right now is exactly where they are – on the screen making us laugh.