Skip to content
June 9, 2014 in The West Australian See more stories from this title 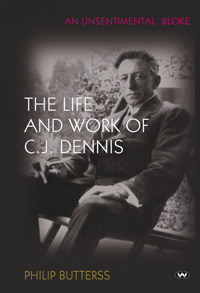 If you were born before 1980 you probably remember a whole other Australia from the one we live in now. We used to talk about larrikinism, swagmen and other relics of a culture that arose out of a nation of primary industries and a healthy cynicism about the pomp and pageantry of our British roots.

Today, as cultural critics have complained since the time we stopped using the term ‘lucky country’, Australia is more identifiable as a branch office of the American cultural, economic, media and lifestyle model. No matter how much our artistic gatekeepers might wish otherwise, today we’re more familiar with Bella Swann and Katniss Everdeen than Bill the Sentimental Bloke or Ginger Meggs (in fact, today many of us are more likely to use the word ‘dude’ or ‘guy’ than ‘bloke’ at all).

“A lot of people know the name CJ Dennis,” says Phil Butterss, a University of Adelaide academic and author of the incredibly detailed biography An Unsentimental Bloke: the Life and Work of CJ Dennis. “but his work is part of a general forgetting of Australian history. Part of it is a fading of interest in those old images of Australian masculinity.”

Along with contemporaries like Henry Lawson and Banjo Paterson, Dennis helped legitimise the Australian pioneer/larrikin archetype. Giving plenty of entertainers and politicians their public profiles, the iconographies of old Australiana fell out of favour in the 1980s with the rise of economic deregulation and hip cafes.

But at the time, Dennis was a major literary celebrity, his work so widespread and popular around 1915 and 1916 many said he helped them cope with the horrific news coming out of Europe because of the First World War. “We ought to be looking at him again a hundred years later to find out how people were living their lives during that time and how important he was,” Butterss thinks.

In fact, it’s now been so long since the farmer, shearer and bushman narratives that marked the tail end of the era (think Paul Hogan and Don’s Party), one wonders what a man like Dennis would think of Australia today. One of the literary forefathers who helped foster mythologies like the swaggie and the tuckerbag, Dennis found his feet as an artist in a very different society. For one thing, poetry – the medium for which he’s best known – is a very different beast.

“He liked his poetry able to be understood and humorous,” Butterss believes, “that was his primary interest. At the end of the 19th century, poetry was the high literary form and novels weren’t as popular. But into the 20th century poetry became much less fashionable. The novel rose in popularity and poetry became much more complicated and much less accessible.”

You might also be surprised to learn Dennis did much more than write funny poems in newspapers about life and times in the early 20th century, he was also a journalist and even a political writer. When the memory of his art is so often boiled down to one iconic title, was it Butterss’ intention to give us more to remember Dennis by, considering he died aged 61 on the even of the Second World War?

“My aim was to really just tell as full a story as I could because he wasn’t as well known as he should be,” the English and literature scholar says. “Dennis himself had always been known as a sentimental bloke and it became clear from reading his private correspondence and anecdotes about him that he wasn’t just simple, naíve and sentimental like his most famous character.

One of the aspects of his later life that’s still a bit hidden was his political activism. For at least 10 years he was heavily involved in writing political poetry and political articles and there was a very intense six weeks where he was employed by the Labor Party to work on its 1914 election campaign.”

Butterss’ book is also quite an achievement for the amount of detail it wrangles. Somehow he’s put together anecdotal evidence as well as historical record to paint a strikingly comprehensive picture of Dennis’ upbringing, formation as an artist and career.

“It’s been a long process,” Butterss laughs when we The West compares him to a detective. “I’ve been working on it for 12 years in between teaching commitments and it involved a lot of quiet work in archives. It’s a pleasure when you put the pieces together but it’s also a pleasure just holding stuff like some of the letters Dennis himself wrote.”

The last major biography of Dennis, written by a close friend, was released in 1946. Since then, Butterss says a lot more has become available in libraries and collections across the country. But owing to the period, it still meant a lot of trawling through paper – hardly any of the material was even on microfilm, let alone computer. The National Library has also spent the last four or five years digitising their newspaper collections, which he says was hugely helpful.

“A good example is anything to do with his wife. With a bit of work it turned out that she’d been divorced and liked to keep that a secret, but if you type her and Dennis’ names into the search engine now, the newspaper reports of the divorce case come straight up in the archive. So it’s vastly easier to do this kind of research than it was even five years ago, but there’s still a lot of metaphors for fishing involved, sitting at the end of a jetty for days and then suddenly finding something.”

And after all the reading, searching and putting together of jigsaw pieces, one of the most gratifying results has been a sense that Butterss feels he’s come to know Dennis a little. “You do after working this long,” he agrees. “He himself didn’t leave any diaries so it’s largely a matter of putting material together from letters and other people’s reminiscences. But there was enough there to get quite a strong sense of what a complicated person he was and some of the different things that drove him during his life.”