Skip to content
July 28, 2016 in GQ See more stories from this title 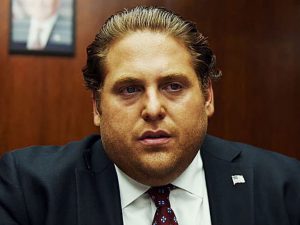 Long part of the famed ‘Jew Tang Clan’ – the new breed of comedy stars that includes pals Seth Rogen, James Franco, Danny McBride, Craig Robinson and a host of others (for a full list see 2013’s This Is The End or the forthcoming R rated animated comedy Sausage Party) – Jonah Hill is following dual paths.

In one he’s the schlubby funny guy in movies like The Sitter and the 21 Jump St films. In the other, he skirts dangerously close to Oscar territory in movies like Moneyball and The Wolf of Wall Street.

Today the 32 year old has the luxury and the clout to do both in equal measure. He appeared for no less than the Coen Brothers in Hail, Cesar! around the same time as the 21 Jump St sequel, 22 Jump St.

Todd (The Hangover) Phillips’ new film War Dogs might be the first time we’ve seen Hill do both. A true story, Hill plays arms dealer Efraim Deveroli, a young man in Miami who exploits a lucrative loophole in the US arms supply industry to become multimillionaires with partner and friend David Packhouz (Miles Teller).