Skip to content
November 5, 2012 in Moviehole See more stories from this title 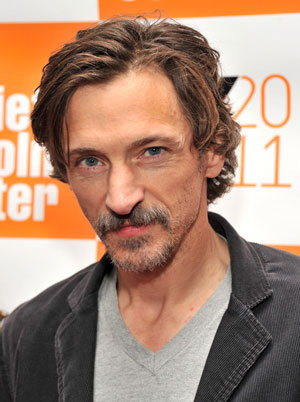 It’s probably too early to call an Oscar result (we haven’t seen Hitchcock or Lincoln yet) but whatever happens, John Hawkes will give the pack a serious run for their money. Not only doe Academy members love people who are sick, dying or disabled, Hawkes can’t move much more than his eyes and mouth and still gives one of the most affecting performances of the year. Together with a revelatory Helen Hunt as sex surrogate Cheryl, Hawkes makes The Sessions an actors’ piece, but with doses of warmth and humour the likes of which you never expect.

A shuffling, almost-nervous figure at the Los Angeles press day, Hawkes is well (and soft) spoken, kind and erudite. But his slightly downcast, serious eyes and thin moustache also give him the slight air of evil that was put to good use in Martha Marcy May Marlene.

He’s been in a dozen movies you know, from The Perfect Storm and Miami Vice to American Gangster and Winter’s Bone, and a dozen you don’t. Hawkes has always had a great future ahead of him as a smart, psychotic villain if he wants, but The Sessions confirms him a prodigious talent that will have his pick of roles in future.

An actor uses his or her body among other things. How do you create a character with that tool taken away?

There were physical limitations of the role for sure, but I figured out Mark’s unique body position due to his polio ravaged frame and figured out what I wanted to do with his speaking voice. Once that was all really ingrained I approached the role like I do every time. I have no formal training as an actor, but over time I guess I’ve developed my own technique. Once I could make the physicality second nature I didn’t feel limited at all.

But even making simple gestures with our hands is second nature. You must have to condition yourself out of stuff like that?

Yeah, it was unusual. 90-degree head movement being the sum of your physicality in the film is challenging. But the hardest thing was to find the contorted position lying on top of the device we developed to curve my spine and twist my limbs the way the real Mark O’Brien described.

Is it more enriching creatively to play a character completely different to how you really are?

I get to play a pretty wide range of characters but certainly I’ve never played a horizontal guy with so little movement. I guess to see the result and have it perceived as being believable and effective for the film with so little movement, I guess that’s a good thing. While we were shooting I tried not to concern myself too much with all of that and just be a human being.

Any trepidation about taking the role on?

The main hesitation I had at the outset when I met with Ben [Lewin, writer/director] was why they didn’t have a disabled actor playing the role. Ben himself is disabled, he’s a polio survivor. He told me he’d taken several years, done his due diligence and searched for actors to play the role of Mark and for whatever reason he just hadn’t found the guy.

So he told me he thought I could do it. When we spoke at that first meeting there was a great deal of short hand agreement about how to approach the story and the character. He just felt like a guy in whose hands I’d be able to try this thing. Certainly there was some question as to whether I could carry a film with so little movement but it was a great story. It was really well drawn on the page and the character was so singular and unusual and fascinating, I wasn’t sure how I would do it but I knew that I did want to do it.

How much research or preparation did you do?

I had hundreds of hours of preparation, there were so many great tools at my disposal. I had special breathing lessons, there were Mark’s writings. He was a journalist and wrote a lot of essays and poetry, I read every word of his I could find.

He also left us with an autobiography called How I Became a Human Being, which was another great and effective source. The real Cheryl – portrayed so wonderfully by Helen Hunt in the film – was available, the same for Mark’s girlfriend for the last few years of his life.

Again, a lot of it was figuring out the physical side of things and making the stick for my mouth and learning to type, turn pages of a book, make phone calls and that kind of thing.

Talk about your scenes with Helen Hunt. They were intimate and very beautiful.

Ben Lewin gave us a wonderful gift in that he decided to shoot the intimate scenes between Helen and I in chronological order. That allowed us to keep our distance at first. When you’re an actor on stage you rehearse to try and find moments to recreate each night for the audience, and what film does really uniquely and effectively is capture moments happening for the very first time between two people.

So Helen and I didn’t know each other really at all and didn’t rehearse a great deal. A lot of what you see is happening in real time for the first time.

I found Helen to be very professional and very smart, very funny and immensely talented in this role. I think the word ‘brave’ is thrown around a little too freely around acting performances but in this case it’s really, really true. If ever the term ‘the nudity was necessary for the story’ would apply then this would be that film. I found her to be a game and willing partner and I hope she felt the same for me.

You play a support role in Steven Spielberg’s Lincoln. Do you approach a role differently when you’re not on screen as much?

Paradoxically it’s more difficult in many ways to play a small role than when you’re in the film from beginning to end. If it’s a major role the audience will kind of fill in the details. You can do the actions the script is calling for and the audience sort of makes their own character alongside in a strange way. But if you’re in a movie for a short time, there’s so much you have to invent to be a whole and credible human being.