Skip to content
May 29, 2013 in Dark Horizons See more stories from this title 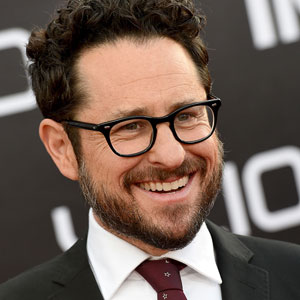 Hot on the heels of the biggest sci-fi news of the century – that Disney would be buying LucasFilm and restarting the Star Wars warp drive – came the inevitable question. Who could carry the saga that rewrote the way we look at film and film marketing into a new century?

In hindsight, Spielberg prodigy and one-man pop culture machine JJ Abrams was the obvious choice. The 2009 reboot of Star Trek took a sci-fi franchise that was starting to look as creaky and fusty as its first (and second) generation of stars and breathed thrilling new life into it.

When Dark Horizons spoke to Abrams in Los Angeles about Star Trek Into Darkness, LucasFilm head Kathleen Kennedy was secretly courting him to take the reigns of a galaxy far, far away, and news of his appointment wouldn’t break for several weeks. Somehow, the 46 year old kept a straight face as he talked about the second outing for the Enterprise crew.

The first film was such a critical and commercial success. What was your jumping off point this time around when the Star Trek universe could go anywhere?

The key was to treat it like a standalone movie, not to assume one cares or knows the characters. One of the issues I’ve had with some sequels is the movie starts and feels like it assumes you just watched the last one five minutes ago, so you need to work to re-engage.

We wanted a movie that says ‘maybe you’ve seen the first one and if you have it was five years ago’. So we really tried to treat it like a brand new thing.

How much do you decide how much to tap into the past mythology?

If you’re not a fan of Star Trek, if you’ve never seen it – and I still feel like that was me because I was never a fan – then this movie is for you. If you’re a Star Trek fan you’ll be very happy because there’s a lot of stuff for you in it.

But it wasn’t made for people who love Star Trek, it was made for people like myself who love going to movies and seeing spectacle and emotion and touching stories. But it’s certainly not a Star Trek fan movie just like the first one wasn’t.

Is it more fun not to have to set up all the characters though, and just jump in to the action [the first scene sees thrilling dual action sequences of Kirk and McCoy escaping a primitive race running through an alien forest and Spock trapped inside a volcano]?

Well, we do explain the characters. I mean, it starts with action but it reconnects with our people in a way that doesn’t assume you know or care about them.

But what was fun was because the last movie had these characters just meeting, there was no way for the group to jump in because there was no group. They were all these disparate characters who all kind of had a piece missing. They’re all orphans and by the end of that first movie they’re a family. So what was fun about this one was being able to immediately create a dynamic and see how everyone interacts.

How about challenges with the production itself?

I don’t know how many times bigger than the first one this one is, but it really is huge. I mean, you think ‘we have a bigger budget, we’re good’, and you realise you’re so under. So the challenge was how we even realised everything we needed to do. There were almost twice as many locations as in the last movie.

But maybe more importantly, how do we make it feel real? I didn’t want it to feel, frankly, how the TV show looked – they didn’t have a lot of resources. I wanted to build or use sets we could expand and extend as opposed to doing green screen and blue screen. Because you can just feel when you’re watching a movie, even if it looks really good technically, when something looks right.

So on a movie where you can potentially have a lot of fake looking stuff, my ambition was to have sets that took place in as many actual locations as possible. Which is why we shot a bunch of action stuff in cities, on actual streets. When you do that you actually have the interaction with the light, you can place the camera at a much farther distance. And the result, especially on IMAX, is fucking incredible.

We’ve seen a million villains, especially in sci-fi. How do you create one we’ve never seen before [speculation is high that John Harrison, played by Benedict Cumberbatch, is actually Kahn, Star Trek’s most iconic villain]?

The specific thing that makes any bad guy great is when you ask him or her who the bad guy is and they point to the other person, the one we think is the good guy. Arguably Nero [Eric Bana] in the first movie was more just a raving, vengeful, lunatic. All he wanted to do was destroy Vulcan and Earth and the Federation.

The beauty of the character Benedict plays is he’s completely rational. In fact, he’s telling the truth, and that was really exciting. He brings intelligence to the part and it really elevates it. When he was on set all the other actors were just a little bit more serious. It reminded me a bit of Super 8. Every time Elle Fanning was around all the boys were really well behaved.

There are a lot of secrets in your movies that you don’t want revealed until the movie’s seen. In this day and age how do you keep everything so under wraps?

I just try not to answer your questions.

No, it’s always kind of obvious stuff. You know, keeping people on the crew sworn to secrecy, the importance of preserving the surprise for the audience. At Bad Robot we have a reputation for being pretty quiet about things and people understand that and respect it.

A lot of it is just make sure the scripts aren’t being handed out left and right like crazy. I wrote this version of the Superman script years ago, which ended up getting reviewed online before it went to production and it was just a disaster, the movie didn’t end up happening.

Because it’s not like we’re not making scripts for people to see, we’re making movies. So we just want to protect it and be as careful and safe as we can. I just feel like when you know what a story is and you’ve seen enough photographs and sequences from it you can end up going into a theatre feeling like you’ve sort of seen it.

So I’m not against having information out there, but I’m thrilled I didn’t know what Skyfall was when I saw it. I’m thrilled that I didn’t know who M actually was at the end. They were great things in that movie because they ended up happening as the movie intended. I’d love it if we can allow people, at least for the first week, to go see Star Trek and not feel like ‘yeah I know that’. Just have a little bit of surprise.