Skip to content
November 18, 2013 in TimeOut See more stories from this title 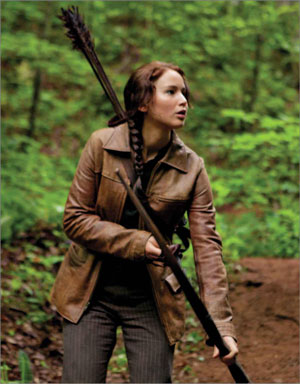 In the last 12 months Jennifer Lawrence won both the Hunger Games and its Hollywood equivalent. Reprising the role of Katniss Everdeen this month, Oscar’s Best Actress reflects to Time Out on being the girl on fire

Meeting Jennifer Lawrence in Los Angeles, Time Out screws up right out of the gate by saying she seems older than when we last saw her, as a wide-eyed girl amazed by all the attention when promoting X-Men: First Class. Of course we meant wiser, more assured, with the designer threads and head-held-high movie star walk. She smirks and says: “I am older. Thank you for reminding me. Just like what every actor wants to hear.”

And that’s the 23-year-old in a nutshell. Hollywood might have given her a polish on the outside and she’s probably a little more jaded about the spotlight by now, but she hasn’t lost her sense of humour. But at the next question (Is Hollywood making you grow up faster?), a new sense of self-assurance comes out too. “I don’t think Hollywood is making me do anything,” Lawrence says in her signature purr.

The Jennifer Lawrence story is the stuff of Hollywood dreams. While on holidays in New York at 14, a modelling agency took a picture. Even while agencies were calling her mother offering work, she decided she wanted to be an actor instead. Two sitcoms later she was offered the lead role in Winter’s Bone, which led to her first Oscar nomination at only 19.

The Oscar heat led to some small indie roles (Mel Gibson’s The Beaver, Like Crazy), X-Men: First Class introduced her to multiplex audiences, and then came the Hunger Games juggernaut. One the back of such popularity, David O Russell cast her as the damaged Tiffany in The Silver Linings Playbook, and before we knew it Lawrence was tripping up the Academy steps to accept her Best Actress Oscar, Jack Nicholson sidling up to her backstage like an obsessed fan (which you can see in a hilarious YouTube video).

She’d be crazy to leave the Hunger Games saga behind right now, but it’s a big ask for a woman so young. The third instalment (Mockingjay) has already been split into two Twilight/Harry Potter-style instalments to arrive in 2014 and 2015. What is it about returning to Katniss that appeals to the actor in her?

“She’s changed,” Lawrence says. “She’s suffering from post-traumatic stress and has a completely different life where she doesn’t have to hunt for food anymore, so she feels useless. She’s living in this big mansion where she doesn’t have to work and her life doesn’t really have a purpose anymore. And she’s not as connected to Gale [Liam Hemsworth] because there’s an entire part of her life now that only Peeta [Josh Hutcherson] understands because they lived through it together.”

Lawrence also says she identified with Katniss’ post-Games plight because she’s been there. “When it comes to the hair and makeup and clothes, I related to it completely because I was reading the first book around the time I’d been nominated for Winter’s Bone and we were both kind of going through that. You don’t feel like yourself.”

But in a way, the star confirms she’s more used to the trappings of fame than the Katniss Everdeen we revisit in Catching Fire. “It happens again and you get more comfortable with it,” she says. “That’s happening to her in Catching Fire.

“It’s not that she likes it, but she gets it. It’s not as foreign to me anymore and it’s kind of the same with her. When she gets to the Capitol it’s not this crazy brand new world anymore. It’s something she can learn how to work.”

Now, there seems no stopping the Jennifer Lawrence brand. The day after her Oscar win, she was on set for Catching Fire and she says she hasn’t really stopped working since. Next up is a role in Susanne Bier’s Serena, about a depression-era American timber empire. She’s reteaming with Silver Linings Playbook director Russell for American Hustle opposite Christian Bale, where she plays the wife of Bale’s 70s-era con artist.

Then comes X-Men: Days of Future Past in 2014, the two-part Hunger Games climax and three movies in planning (one with Lawrence as producer). The sky’s usually the limit for actors this young and talented, but after such a meteoric rise to critical and commercial success that culminated in the ultimate Hollywood honour, it seems she surpassed the sky long ago. Where else can she possibly go?

“Well, you don’t decide when to win an Oscar,” she says. “So I couldn’t say ‘no guys, I’m not ready and I’m not sure’. It’s not really up to you. So whether I was ready or not it happened and I’m grateful for it. It was never part of my plan, I’m just doing movies, I’m just doing my job. I think if winning Oscars was driving me I’d be very unhappy

“The only thing I think about is that I want to make this movie, I want to play this character, I want to work with this director. I don’t have plans for future Oscars. I wouldn’t turn one down but I don’t think it should dictate anything in my career or personal life. It happened, it was lovely and now it’s over.”

But there another dimension to Katniss, The Hunger Games and Lawrence herself she might not have counted on, and that’s the political hot potato issue of what we expose our children to. Last year she told Elle Magazine she didn’t want little girls to tell themselves ‘I want to look like Katniss, so I’m going to skip dinner.’ The story at the time was that the studio asked Lawrence to lose weight for her role in Catching Fire and she refused.

“It’s a responsibility,” she says about being a role model now. “It’s easy for me to say ‘I’m not responsible for how anyone raises their own kids.’ But 13-year-old girls are watching and I think our industry is very good at making excuses and saying ‘we don’t have to be responsible for this or that’. Nothing really gets better when you just keep making that same excuse. This industry is the starting point. We start the trends. We’re what kids and teenagers are looking at, so whether you want it or not you do have a voice.”