Skip to content
August 14, 2012 in Moviehole See more stories from this title 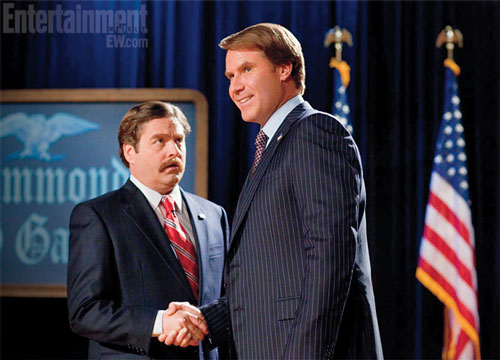 Some directors slot into a niche and stay there quite comfortably. For all their critical acclaim, you can spot a Woody Allen and Robert Altman as surely as a Monet or Rembrandt. At the other end of the scale is a journeyman like Steven Soderbergh, whose every project is something completely fresh in style, content and approach.

The guy behind Austin Powers: International Man of Mystery and its sequels didn’t give us any reason to think he’d do anything vastly different until the scathing political thriller Recount, based on the 2000 US election fallout. Then came the critically praised HBO movie Game Change, depicting the 2008 presidential race of John McCain and Sarah Palin, played by Ed Harris and Julianne Moore.

Between Mike Myers’ international man of mystery spy and his hit political dramas Roach also bought us Meet the Parents and its sequels, without the slapstick of Austin Powers but no less successful, and his new film The Campaign combines politics and comedy in one of the funniest movies of the year.

Will Ferrell [star of The Campaign along with Zach Galifianakis] has been famous for his George W Bush impressions. Did you make sure to get some digs at Bush into The Campaign?

There are so many other politicians, I thought you were going to say somebody else. But I don’t think there were any particular digs at Bush. A number of things in the film are over the top but every one of them you can almost point to an exact moment in recent history where something that outrageous has occurred.

Our political system has gotten to be a kind of cage fight or reality show that’s pretty ridiculous sometimes. Recently it’s become so polarised and so entertainment and conflict driven, we’re just trying to step back a little bit and say ‘is this how it’s supposed to work? Doesn’t it look a little bit silly sometimes?’

There’s no other area where truth is stranger than fiction?

Yeah, and particularly right now. I can’t imagine it’s always been that way but I fantasise about a time when people used to be a bit more statesmanlike and civil. But I enjoy politics and if it takes big stunts and splashy campaign ads to get people’s attention I guess it’s good that at least people are paying attention. But it doesn’t mean we can’t make fun of it.

Can you talk about how this film is the culmination between the comedy and political drama you’ve been so good at so far?

I love making comedies. I love making people laugh. It’s something I kind of fell into by accident. I was interested in much more serious films, coming out of film school I’d written a lot of science fiction and bizarre art films. I thought that’s all I would do and I got tangled up in comedy through Mike Myers who drafted me into Austin Powers.

But I’ve always stayed current in public affairs by just being an amateur reader of everything that goes on, and I got caught up in those stories in Recount and Game Change because they were therapeutic for me in a way. I worry because things seem to be kind of out of whack in politics and it was my chance to dig seriously into those issues.

But it’s also therapeutic to be allowed to have fun at the expense of it. John Stewart and the Saturday Night Live skits about politics make me feel saner. As long as we can keep laughing about it we can probably figure out how to do it better, and I think that’s healthy.

So I’ve been thinking about how to do it but the idea came from Adam McKay [funnyordie.com]. He’s a great director himself and he pitched it to Zach and Will. They took me to lunch and asked if I’d do it.

Can you talk about how political drama is cathartic for you?

So those films were about getting into that room and trying to raise questions. Seeing helps. It’s a ridiculous metaphor to take too far but I’m much less afraid of sharks when I’m down in the water with the goggles on because I can see them.

In a really great documentary like Fog of War or a great political film like All the President’s Men you feel like you’re getting an insight into how things actually happen. It makes you ever so slightly less anxious about the system.

Is comedy or drama more effective at showing us behind the scenes in that way?

Each can be effective in different ways. If you’re getting some truth about a system or subculture, drama can be very elucidating, shining a light on something you wish you could see better.

In comedy, I think it’s about perspective. An ironic perspective can help, not taking your own partisan prejudices and predispositions so seriously. You feel like you’re all in it together when you can all laugh together. The shared experience of laughing at something that’s so dysfunctional – when you sometimes feel you’re the only one who thinks it’s dysfunctional – really helps.

Now you’ve done more satirical comedy as well as the broader comedy of Austin Powers, do you have a favourite?

I hope to do a variety of stories. This film is first and foremost meant to be as funny as it possibly can. We’ve got some of the funniest people on earth put into a predicament that requires that they try and tear each other apart in a funny way, and it’s a blast to be trying to tell a story that way.

But I hope I’m offering the audience another kind of enjoyment when you feel like you’re getting access to something. I took a chance on doing that in Recount because there was no real evidence I’d be able to pull that off. So I was happy to live up to expectations but it was terrifying, but now I feel like I don’t have to just do comedy all the time. It’s a nice feeling.

Were you particularly looking for something that combined comedy and politics?

No, as they said, they came to me. I found myself saying ‘look what John Stewart’s doing, is anyone able to do that on film?’ It’s become difficult getting anything with the word ‘politics’ off the ground in the studio system here it’s a tribute to Warner Bros that they were willing to take a chance on this.

What enables you to make a film about politics is having two of the funniest people on earth be part of it. I didn’t think it would be possible to find a way to make a film like this, and it took Zach and Will but also Adam McKay who had the original instinct to pair them together. It really was sold based on that. Adam McKay said ‘It’s these two guys, they’re going at each other in the south and it’s one of the dirtiest campaigns ever. It’ll be freaking hilarious, are you guys in or out?’

You don’t have a lot of writing credits after Blown Away (1994), any reason why?

I write a little bit on every film but I never take credit for it because I’m never doing enough to earn credit. But it’s funny you bring it up because I’m at a place where I find these stories that are more compelling to me personally.

The Game Change story was particularly interesting to me. I had the idea to do that story before the book was even out and I was reminded that there is an aspect of having the story come from a deep personal concern that makes it all the more enjoyable to do.

Although The Campaign didn’t come from that we had an instant synchronicity about what we were up to so it became very personal. I think the next step is to go even more personal and write again something that I would do myself.

Any clues when we’ll see that more personal project?

I don’t know. I’m going to take a little time off and figure out the next thing.

How does having a writing background inform on you as a director?

There’s nothing that matters more in trying to get your way into the business than becoming a good storyteller. That really applies for anything. When I choose my visual effects designer, my cameraperson, my editors, every one of them could direct a film on their own because they’re master storytellers. So every position, including directing, requires you to know as much you can know about how to tell a good story.

And I don’t think I was ever a very good writer. I knew about the story but to actually be in the room with that blank screen generating the words and dialogue, that’s a whole other sort of psychological predisposition that the really great writers have. I always have so much respect for writers and I always bring them on the set, keep them involved in the shoot and the post and every aspect of it. Even when the film is released I like to try and pull the writers in and keep them with me.

How much control do you have over directing Will Ferrell and Zach Galifianakis, or do you just say ‘action’ and unleash them?

You start with the script and then make time and be fast enough as a crew to go with change. You can say ‘we got the plan, now what’s the unplanned form of this?’ And with those two guys, to make that time available is so important because the things that they would try after the plan were very often the things that would work better.

Any news on Austin Powers 4?

We’ve talked to Mike about it a few times. I know it got a little more traction a few months ago but that’s happened from time to time over the years. And we’ve always said if we could find the right thing that makes it earn its way back, we’ll both jump in. It’s driven by Mike because it’s his baby. He really gave me the break of a lifetime drafting me into directing it, so whatever he wants, I’m there to help him figure it out.

We don’t want to lose you completely to political dramas.