Skip to content
August 1, 2004 in Filmink See more stories from this title 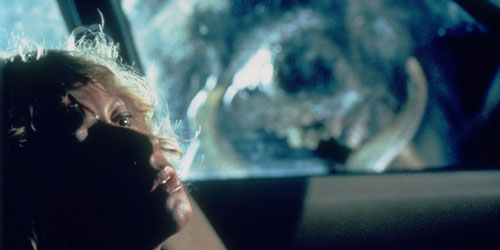 ‘I’m tired of finicky actors,’ Walt Disney reputedly said to animation designer Jack Gladish in the early 1960s, ‘I want to develop a fully animated, articulated human being to use in place of motion picture actors.’ Gladish was working on Disney’s life size animatronic model of Abraham Lincoln, the first serious foray into an animated, electronic character.

After seeing the prototype, Disney told Gladish he wanted twice as many motions and half as much weight. Disney engineers spent 90 days achieving ‘gigantic leaps in the technology’ in valves and solenoids that are still standard.

In fact, all that’s changed is the advent of computer-controlled movement, says veteran Australian makeup effects veteran Bob McCarron. “The only thing that’s changed greatly is the software linking an animatronic to a body now. An actor’s movement is put through the software to the animatronic, rather than a group of puppeteers. But in 1968 John Chambers did Planet of the Apes with foam Latex, then in 2001 Rick Baker did Planet of the Apes with foam latex. The sculpture was more refined but the materials were the same as in 1968.”

And it’s still an integral part of most action/adventure movies. Just like CG has made us believe cities can get wiped out by giant alien ships, animatronics have shown us (among other things) that dinosaurs can get loose in a theme park, a giant gorilla can climb New York buildings, a cute pig can talk and turtles can really become ninjas.

Tools of the Trade

Most of us know animatronics has to do with skin made out of foam latex jammed full of wires and pulleys, but just how hard is it? And how do you get into it?

Creating an animatronic effect means you’ll be a jack of all trades. The machining and engineering involved is a very different from makeup effects and sculpting. While his team created their animatronic Abraham Lincoln, Disney took them off the payroll and paid them out of his own pocket to circumvent the dizzying array of union requirements.

But don’t the materials cost a fortune and only come from a specialist shop somewhere in Hollywood? The trick is actually the know-how, not the toolbox. Having worked on films from Mad Max and The Piano to the Matrix series, Bob McCarron describes hunting trips for materials in the early 1980’s. “America manufactures the bulk of the gadgetry other countries use,” he says, “and you can buy most of it here because it’s all become so refined. The cabling in our first gorilla was from a lawnmower, but you can buy the cable you need for an animatronic lip from America very simply nowadays.”

Jez Harris of Crawley Creatures — the UK effects house responsible for the animatronics in Walking with Dinosaurs — reports a similarly inexpensive learning curve. “A lot of our work is the initial sculpture so simple materials like clay or plaster are reasonably cheap,” Harris says. “The machines tend to take the most amount of time, but it still isn’t expensive using off-the-shelf radio controls like the stuff used in model airplanes or boats, so it depends how sophisticated you want to get. If you want to do computer-controlled animatronics the custom-built hardware gets expensive.”

Like many other filmmaking disciplines in Australia, animatronics is too specialised a field for many training opportunities. Courses in makeup effects are not only more plentiful but a good start to learn about the finer points of the moulding and sculpting process.

Because courses teaching all aspects of animatronics would be prohibitively expensive (owing to insurance covering the machinery and materials), the best bet would appear to be to learn on the job. And the good news is that — just like in other areas — Australians are up there with the worlds best and in some cases, at the forefront.

“I’ve heard so many Americans say they’re amazed how they invented these things but we’re an island and we’ve learnt it all on our own,” Bob McCarron says. “We did a gorilla, even before Rick Baker had done King Kong, and at Universal Studios they’d never seen springs used in animatronics. A guy over there asked if he could take notes, and two years later King Kong popped up.”

Know Before You Go

The key to animatronics is planning. “Know what you want before you start building,” says Bob McCarron. “Know what you want it to do, then see if you have the time and money to do it. Don’t just try it and think “this is the best I can do”. You need every shot and every camera angle planned. A director will change something during the shoot, and they want you to be able to do it.”

Jez Harris reckons that sometimes you have to go even further back. If you’re creating a realistic creature, be familiar with how the real thing works. “A lot of animatronics is watching real animals,” he says. “Understanding movement and anatomy, how bones work and the size of muscles — especially facial nuances. In Dinosaurs, we took the same approach to colouring — you compare it to the modern day environment.”

While Stan Winston (Jurassic Park, Terminator) or Phil Tippett (Starship Troopers, Robocop) can become famous creating the most iconic animatronic characters in the world, we’re still fairly limited down under. “People ring me up and they just want to do one thing, like just animatronics or just blood and guts,” McCarron says. “The film industry in Australia still isn’t big enough to support that. You can’t afford to be so specialised.”

If You Build It

It’s never going to be easy to break into — like so much of the movie industry, the animatronics epicenter is in the US. Also typical of filmmaking, it’s a matter of multitasking — you need to be a sculptor, machinist, painter, hair stitcher, electrician and possibly computer programmer if you’re doing it all yourself.

But the tools are easy to come by, it’s all fairly cheap to produce and both published and online resources are plentiful, so the only obstacle is your own determination.