Skip to content
May 1, 2003 in Desktop See more stories from this title 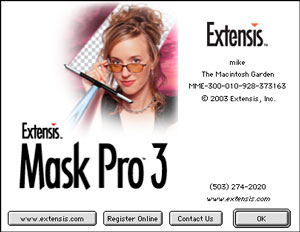 Having already hit the shelves as you read these words will be masking and selection wunderkind Mask Pro 3 for Mac OS 9.2/Mac OSX.

Updated by Extensis with an engine that runs and looks well with Mac OS X (but still runs under System 9 — a rare but blessed quality in new software).

Mask Pro runs as a Photoshop plugin — you open it from within Photoshop to manipulate the image you’re working on then and there. As such, it doesn’t suck up massive amounts of your system resources.

It works by selecting colours. In simple images (ie ones with sharp boundaries that you’re masking), the highlighter tools are enough; you simply draw as close to the edge using the correct tool depending on which colours you want to keep and which you want to discard.

Mask Pro does the rest by calculating what you’re after based on the colours you’ve selected for each.

Of course, it’s just as easy to draw a path while you’re still in Photoshop, make a selection out of it and delete the inverse selection, so for really simple masking, your money would be far better spent upgrading Photoshop or getting better scanning power.

The basis for the more complicated masking is still selection of colours. Using the Keep and Drop palettes (similar to the Layers palette), you use eyedropper tools to sample colours to retain and discard, then the paintbrushes to make Mask Pro work its magic.

Depending on the edge you’re trying to find, there’s more than just highlighting and colour sampling in the box of tricks. You can also draw a path with a simple pen tool against the edge of part of an image that has a hard edge, then use the path to select and discard similar colours around it — right to the edge you want to retain.

The paintbucket tool can be used to go over indistinct edges (on hair, smoke or feathers, for instance) and knock out the colour you don’t want one pixel at a time.

And by the time you’ve finished all that work, you might still have a background-colour ‘halo’. The chisel tool digs away at the last vestiges of the background colour outside the keep colours — totally flush against the part of the picture you want to keep.

Between all these selection methods, you’re almost guaranteed of getting the mask you want.

Sound familiar? Using the lasso, selection marquee and magic wand in Photoshop does much the same thing for other selection tasks, and that’s where Mask Pro 3’s true beauty lies.

Not only does it launch as a Photoshop plugin, it gives you a very familiar way of working, and if you use Photoshop anyway, there’s no reason you won’t pick up Mask Pro in a snap — especially if you’ve worked a lot with masks in the past anyway.

In the old days, you sat there all day endlessly selecting, deselecting and selecting again for the perfect mask, wishing there was a piece of software that had all the tricks you knew you needed. Mask Pro is it.

Complicated masking is nothing you couldn’t do in Photoshop anyway — Mask Pro just makes it easier. So the reason it’s good value for money isn’t even that it’s a great product that does its job well.

It’s because if you’re part of a commercial studio, it’ll give you something you’ll wonder how you ever did without. Most importantly, you’ll get there without a huge learning curve.

But remembered that software is often marketed (and hoped for) as being able to do magic. The results are not perfect. If you’re working on a messy blonde beehive hairdo against a red background, you’ll still have a hard slog ahead.

But what would have taken all day before will now take you a couple of hours or less.

N.B. A Windows version is planned for late 2003 release.