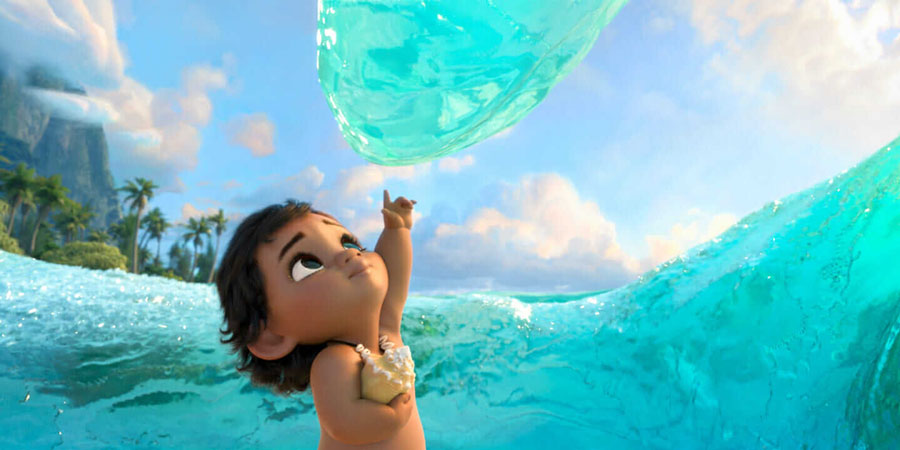 Bringing the myths and colors of the South Pacific to life. By Drew Turney.

When the artists, directors and studio began work on Moana, the first step was to soak in all the cultures they intended to portray. Co-directors John Musker and Ron Clements (The Princess and the Frog, The Little Mermaid, Aladdin) and key department heads travelled to islands all over the Pacific like New Zealand, Tahiti, Samoa and Hawai’i to learn the myths, eat the food, drink in the air, see the lush surrounds and hear the stories of the people who lived there.

They recruited hit composer Lin-Manuel Miranda (of stage show Hamilton) to join the musical crew, hired screenwriter and director Taika Waititi (What We Do in the Shadows, Thor: Ragnarok) to help put the story together, and it was time to get to work.

Of course, the lion’s share of the workload was shared among the artists and animators who drew, sketched, designed, spitballed and finally rigged and programmed 16 year old heroine Moana (Auli’i Cravalho), demigod Maui (Dwayne Johnson) and their friends Hei Hei the Rooster (Alan Tudyk) and the ocean itself for the production.

For Clements and Musker it was something of a baptism of fire. After the 2D, hand-drawn movies they really hit their stride making back in the 1990s, CGI was a new world, but did it change the essential job at hand?

“We don’t focus too much on the technology but we have wonderful, brilliant people who know about that so as gorgeous as the movie is I wish we could claim that was our job and our doing, but it wasn’t,” Musker says.

“We have general directions, I had photos and made sketches when I was in the South Pacific and I was inspired by other things, but then our art director went there and the lighting director studied the translucence the water came back with and did tests for the effects artists.

“One of the producers said that in Moana the jump from story board drawings to finished images seems better than any film he’s been involved in. It’s been our experience too when you see how mind boggling the rendering of the water and the light is.”

Musker says it worked despite he and Clements’ relative newness to the process because of the input they encourage from their people, saying that if they’d had different people it would have been a different movie. “The film’s limited by what we thought it would be but by encouraging people to bring their own ideas the end result is much better.”

But input from artists and crew was just the beginning. It’s tempting to think that in animation you write a script, you hire and actor to come in and read it, and you animate it. How do you account for the happy accidents that happen  when performers do what they do best (or improvise) or even when a better idea comes up midway through the production?

“You come up against those things and realize you want more of this or you have to rewrite that and it’s a challenging process but it starts to coalesce,” Musker says. “You know, you get Dwayne Johnson’s voice and you start writing toward him and see what works, you cast Auli’i and the character really starts to come to life, the movie partially starts to come together and there’s more momentum to it.”

Something else animation offers that a live action shoot can’t is that the whole thing exists only on paper (or computer, nowadays) until it’s ready to be struck to film or copied digitally for projection on a screen – the whole process is your production period.

“I feel like it’s a slow process in animation where we keep ripping the movie apart and doing it again,” says Musker, “but in live action that production is a much smaller window, it’s a really concentrated time of three months and you’re on the set and every minute there are cash registers turning.”

“In animation we also get to see the movie before we make it,” Clements adds. “You put up all the storyboards and it’s not really animated, sometimes there are scratch tracks or they’re not the real actors, but there’s music and the sound effects and you can watch it and get a sense of what’s working and where your problems are. If the movie you hope for isn’t there in live action there’s not a lot you can do – in animation we can keep working on it until we feel really good about it.”

In charge of designing the characters way ahead of time is Art Director of Characters Bill Schwab (Frozen, Tangled, Wreck-it Ralph), who says there are two major aspects to his role. “One is coming on very early and working with the directors and production designer to design the characters with the design team. The second is to work closely with the modeling and rigging teams to develop it, then ultimately animation to stay with the character, to help transition drawings into something real.”

Before the virtual cameras start rolling, Schwab and his colleagues are busy pinning down the way a character will look, move, dress or talk. Even then, drawings are only proofs of concept – when the character rig is animated and actually does talk, dress or move it will inevitably show up flaws that were never envisioned. “Once you have a drawing everyone loves, you’re only a small part of the way there,” he adds.

That’s where animation comes in, and animation head Amy Smeed (Chicken Little, Bolt, Tangled, Wreck It Ralph, Frozen) works with Schwab, the character supervisor and the modelers to bring the character to living, breathing life. Schwab isn’t an animator and Smeed isn’t a designer, which makes the collaboration even more critical from the opening stages.

“I saw some of the early costume designs for Moana and realized they might be too restrictive for her to climb a tree or do anything athletic,” Smeed says. “We needed to make sure the costume would be able to fit what were going to do in animation.”

But Moana, Maui and their attendant animal sidekick (a Disney staple from decades back) aren’t the only characters in the film. Another, as we saw from early clips and trailers when it befriended Moana as a baby, is the ocean itself. The very water that surrounds Moana and her home had to move and behave like the real ocean does, and on top of that, display flashes of distinct personality.

It represented a huge animation challenge, so technical supervisor Hank Driskill was among the special effects wizards charged with pulling it off. “Water’s a pervasive part of the movie,” says Driskill, in something of an understatement. “Moana and Maui are on a boat, they’re falling off a boat, they’re in the middle of stormy seas. We have shoreline water, deep water, swimming, big cresting waves, lots of water interactions. The water is an important part of the movie and it’s in a whole lot of the movie.”

All of which mean that developing software to program and render the behavior of water commanded a good deal of the time and computing power the Disney Company bought to bear. One of its recent hits, Big Hero 6 (2014), was comprised of around 45 percent effects shots. On Moana, it’s 80 percent – a lot of it the management and depiction of water. Needless to say, Driskill says a big part of the effort was to automate the water effects as much as possible.

Mathematical equations exist for the movement of ocean water that are pretty well understood and fairly simple for the kinds of computing power Hollywood wields on most blockbusters. When isolating or overlaying a foreground element like a boat with the attendant wakes, whitewater, etc. we see in the real world, the team chopped it out of the background plane and made it a little self-contained scene in itself.

Not only that, Moana’s ocean needed to have as many moods and forms as the real ocean. Many of the shots that don’t take place out on the open ocean are set at or near the shoreline, and as Driskill explains, there are a lot of moving parts. “There’s a clip of Moana walking up to the ocean, angry at it. You have the subtleties of the movement of the water, the breaking of the water against the shoreline, the water causing the sand to be wet and then pulling back and the sand drying as the water recedes.”

It all meant carving the elements that make up the animation into ever-smaller discrete pieces, an effort that called for a unique IT approach. “There was some effects we really wanted to surpass ourselves on,” he says. “We knew we were pushing up against what we could put on [an individual] machine. We could do 50-100 million particles, but we knew we had to go to hundreds of millions or maybe billions of particles for some of the big cresting waves, so we did a big research push into distributed computing.”

The water solution ran across multiple machines, all in concert and sharing the data crunching as if they were a single central processor, and it turned out to be the answer to automating the process like the effects crew wanted as well.

Driskill says the 50 or so people in the effects department were so good at their jobs everyone wanted to make sure they could focus their energy on the really exciting effects. It led to an advanced form of what he calls foundational effects, a practice Disney started a few movie back.

“We took that step further, actually creating a library of simple effects the layout artists can place in the movie that can actually make it all way through to the final frame without the effects department having to do the work.”

It meant creating library effects where – for example – the team could place a boat in the water and it would move with buoyancy, the animators could place the characters on a boat and the water would respond to their effect on the environment.

Any director will tell you animation is a lot like special effects, costumes and all the other below the line arts – you’re not supposed to notice them, they simply exist to portray the world the story is taking place in.

Animation offers a further opportunity to establish a visual language that’s different from the one we know in our world where characters can look a bit weird or things can move a bit strangely (like in the clip where Moana and the ocean high-five each other.

For better or worse, we might have left the hand-drawn era of 2D animation behind, but if the success of Frozen, Big Hero Six and Zootopia are any indication, Disney still understands that the only special effects that really matter are characters and their conflicts in a world all their own.