Skip to content
October 14, 2013 in Girls and Corpses See more stories from this title 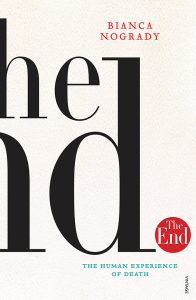 How did you get interested in the topic of death and decide to write about it?

Like most people with a pulse I’ve always avoided thinking about death, but when my grandmother died, I guess it forced me to confront the issue. I was with her half an hour before she died, and afterwards I had so many questions about the experience – did she know I and my cousins were there? Was she suffering or in pain? What was she experiencing. So this book started out as my own attempt to answer this question.

When I had children, it made me realise that we spend so much time talking about and preparing for birth, and birth stories and experiences are willingly shared. But with death, we pretend it doesn’t happen – despite the rather overwhelming evidence that it will. We stick our heads in the sand and hope it will just go away, and I think we are really missing out on such an incredible opportunity by doing that – the opportunity not only to be a little prepared for death, but also to have some control over how we die.

They say nothing is as certain as death and taxes. I think the success of tax havens dismiss the second but death is the one experience we will all share and experience (birth doesn’t really count because it’s not like we’re a conscious part of it). We will all die, and we know that we will die. Don’t you want to know what it might be like?

Were you more interested in most people because of your profession or did you just realise how little we talk about it but how much we think about it?

My job as a science journalist definitely predisposes me to find answers to questions that are niggling me, so when I started with trying to answer the questions I had about my grandmother’s death, that soon grew into a far bigger list of questions about death. Next thing I knew, I had a book forming in my head.

The End was written with a very strong sense of dignity and almost beauty. Was that always your intention?

I’m really glad to hear you say that because this book is full of people’s stories and experiences, and one thing I really wanted to do was treat those stories with respect and with dignity.

There are more than fifty individual experiences of death described in the book. They are all so different – some are peaceful, beautiful deaths while others are full of suffering and grief – but at their core they were stories of people doing their best to cope with the unknown. I think it shows people at their most honest, at their best, and there is beauty and dignity in that.

Birth is generally a messy, chaotic event yet we view it as a beautiful thing; the beginning of a life. Why should death be any different? The ending, the rounding off of a life is just as momentous and significant. It’s the full stop at the end of a poem.

The reality of death however is that it’s seldom dignified or beautiful. Nature can be quite cruel about the way it treats us in death (to say nothing of each other). Are we expecting too much asking for dignity in death?

I don’t think we are asking too much for dignity in death, especially with the advent of palliative care, hospices and home hospice. These institutions have evolved, and relatively recently, because of a real need to improve how we handle death when it is impending or inevitable.

Palliative care really is the unsung hero of medicine because it steps in where the rest of the medicine leaves off. It is about caring, rather than curing. People are often terrified of palliative care but they needn’t be. It is about addressing suffering – whether physical, psychological, spiritual or social – and also not only looks after the patient but also their loved ones.

When my time comes, I’m confident that palliative care (which I hope will be available, wherever I find myself) will be able to take the edge off the fear and suffering. It can’t alleviate it altogether, but it can go a long way.

Is one of the secrets to overcoming our fear of death in laughing at it?

“I laugh in the face of death … ha! ha! ha!” … how many times have we heard the hero of a movie say that! I don’t know if laughter helps overcome our fear of death but it certainly helps make the whole thing a bit less dark. I think there’s a view that death has to be this serious, solemn, somber event with everyone in black, speaking in hushed tones and weeping quietly. But some of the best stories I encountered were about the funnier moments in dying and death.

Just because death is the end of a life, doesn’t mean we have to abandon our sense of humour. Maybe it’s more important than ever to be able to find the funny moments in it all. They say laughter is the best medicine, and while that’s not necessary going to bring the dying back to life, it can bring a much needed moment of relief to those left behind.

Where’s the line where that kind of thing crosses into bad taste?

I think it’s really up to the individual. One person’s humour is another person’s horror. Who am I to say what’s bad taste? If I had to draw a line in the sand, I guess I’d say the point at which it becomes disrespectful, either of the dead or those left behind. But humour is a funny thing (pun intended) … you never really know how you’ll react to something until the joke is cracked and you have the choice of laughing or crying.

Does knowing more about how death works or facing it so factually as you did make you appreciate life any more?

Most definitely. It’s made me confront my own fears about death, work out exactly what I am afraid of and at least acknowledge those fears. So now I know that my biggest fears around death are actually to do with being a mother of young kids, and leaving them and my husband behind. So maybe it has made me more aware of the preciousness of being with them (although I’m still just as grateful when they’ve gone to bed at night and we can relax!).

Sex is no longer taboo in polite conversation, do you think death will ever be similarly accepted?

Given orgasms have long been known as ‘le petit mort’ (the little death), I guess we’re slowly working our way up the chain of taboo!

I think it’s already moving in that direction. We’re now seeing the rise of the Death Cafe movement around the world, which encourages people to get together and talk about death. The baby boomer generation are in their twilight years and they are certainly determine to take control over their deaths and decide when, where and how they will die.

The book covered the biological, spiritual and emotional aspects of death beautifully. Were you equally interested in each aspect or were some harder work to research than others?

Being a science nerd, I was probably most intrigued by the biology of death – why we die, how we die, what happens to our body as we’re dying – but I also found the whole question of the definition of death fascinating. I thought it would be the easiest question to answer and it turned out to be the most complex. After all, in trying to define death and pinpoint exactly when we’re dead, what we’re really asking is – what is life, and how do we know when it’s gone?’.

What do you think happens to you after you die?

You’d think after writing a book about death that I’d have the answer but in reality, no one can answer that question. It’s up to each individual and their beliefs to work out what they think will happen. But we can never know until it’s our time, and then we can’t exactly come back and tell people.

Do you believe in the white light at the end of a tunnel?

I absolutely believe that near-death experiences are real for the person experiencing them – the tunnel, the white light, the beautiful landscape – but I don’t know if they are biological or spiritual. They don’t happen to everybody, but I would be pretty glad if that’s the experience I have when I die.

Do you think people should always die or would you condone a pill that could make you live forever?

The American intellectual Leon Kass said it best in 1983 when he wrote that ‘mortality makes life matter’. We flirt with the idea of immortality, and go on about how life’s too short, but really, I think a life well and fully lived is just about the right amount of time for me.

Quite a few science fiction writers have explored what might happen if we were really able to cheat death but most of those scenarios end up looking pretty dystopic. Death is built into our biological blueprint for a good reason; the death of one generation enables, encourages and nurtures subsequent generations.

To quote Leon Kass again, ‘If they are truly to flower, we must go to seed; we must wither and give ground.’ Personally, I’d be happy if I and my husband lived to see our children grow up, have kids of their own, and maybe even see grandkids grow to adulthood. Then I think I’ll be ready for a rest.

Are you religious, do you believe in a God?

I describe myself as loosely agnostic. I have a personal sense that there is some kind of a spiritual plane of existence, and I have a hopeful sense that we are reunited with loved ones when we die. But I’m not religious.