Skip to content
September 15, 2005 in Xpress See more stories from this title 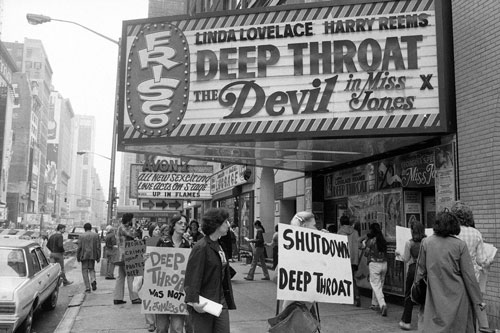 There’s a very telling moment in Inside Deep Throat. Linda Lovelace is on the publicity trail talking to a reporter. She trots out the anti-censorship line, and when the reporter asks if she thinks it could lead to anarchy, she doesn’t even know what he’s talking about, returning quickly to her obviously rehearsed opinion.

Lovelace was as famous for becoming an anti-porn campaigner later on as she’d been for her unique talent, claiming her abusive husband had forced her into it, that she’d been raped on film. What few people know is that — aged almost 50 — she posed nude for a men’s magazine, almost broke and claiming every woman had the right to feel sexy.

Was Linda Boreman a victim of abuse, or just a suburban wife with no political substance who turned opportunistic when she got a taste for publicity, and who — as director Gerry Damiano says — was the sort of person who wanted to be told what to do?

It’s one of the fascinating questions indirectly asked by Inside Deep Throat, which charts the unprecedented rise (sorry) of one of cinema’s most infamous works. Lovelace’s co-star Harry Reems (now a born-again Christian and real estate agent) was paid $250 for his work, the crew not much more. The staggering profits (from the film that’s claimed to be the world’s most profitable) were long ago vacuumed up by the cash-in-hand organised crime apparatus that distributed it.

But Deep Throat became bigger than Lovelace, Reems, Damiano and everyone else involved put together — even the Mob. Because as the Bailey/Barbato film explores, it marked a turning point in cultural history. Inside Deep Throat brings forth personalities from across the political and cultural spectra as witnesses to tell the story of what went down (sorry, last time) when a Times Square grot film became a phenomenon.

Starting with Damiano — now an old man in pastel golf pants, the picture of a modern Florida retiree — and narrated by Dennis Hopper, the movie tracks the making, unorthodox distribution and politi-quake that followed as the conservative government, law enforcement, the religious right and the feminist movement all tried to shut it down.

Told with a lively and engaging voice and sense of style, it shows — like good retroactives do — the snapshot of a historical period, in everything from the clothes and the music to the sexual mores and political orthodoxy of the time. Even if you find the viewpoint hard to swallow (honestly, that’s the last one), it’s a well-told nostalgia trip.

Touring to promote the film, Bailey tells Xpress why the film was so impactful. ‘Damiano is very modest,’ he says when reminded about the director’s line in Inside Deep Throat where he shakes his head softly and says ‘it wasn’t a very good film’. ‘It was a groundbreaking film. At the time, women were still being told the vaginal orgasm was a myth; the clitoris at the back of the throat was about admitting the notion that women wanted pleasure and satisfaction too. And besides that, it’s also very funny.’

But to many (including Bailey and Barbato), much of the impact came from the backlash against the film, and it became the focal point for a cultural battleground between institutionalised forces who wanted to control American society and the public who just wanted to see what the fuss was about. ‘It’s very much about a philosophy of live and let live,’ Bailey says. ‘The Christian right in America don’t want that — even still. They want a very normalised view of sex, and if it’s not for procreation, it’s abnormal.

‘Look at Nipplegate,’ he continues, referring to the uproar over Janet Jackson’s breast falling out of her costume at last year’s Superbowl. ‘Have we really come so far from 1972 to 2005? We live in a sexually saturated culture, although sex itself is hidden away.’

And a surprise to many will be the mob connection, one that becomes apparent as interviewees become increasingly cagey when talking about it (the wife of a Florida theatre owner interrupts an interview repeatedly because she believes her husband is saying too much). Weren’t the filmmakers a bit nervous they’d end up finding something some people didn’t want found?

‘Fortunately we didn’t really know about it before we started,’ Bailey laughs. ‘We discovered it as we were going along and by then it was too late. There were a few moments where we held our breath, but we’re still here.’

It’s a witty, controversial and fond look at another time and place in history, and the usual round of documentaries in cinemas right now are going to face some stiff competition (absolute last time, honest).