Skip to content
November 6, 2017 in Cosmos See more stories from this title 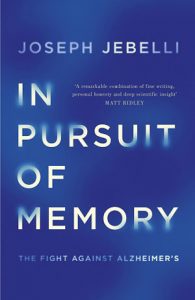 In Pursuit of Memory is a journey of discovery for British neuroscientist Jebelli. After watching his Iranian grandfather succumb to the disease, his book is part of his effort to learn (and tell) the story of everything we know about Alzheimers, from the German physician who isolated it to the latest treatments gene therapy is pursuing.

It’s an urgent and longstanding problem. As the world’s population ages, 135 million people are expected to suffer by 2050, overcoming cancer as the second leading cause of death.

There’s a lot that might go slightly over the head of the casual reader. Alzheimers depends on peptides call beta-amyloids, structures called plaques and tangles that develop in the brain, and genes, prions, microglia and countless other culprits have been identified and investigated, most of which only confirm how little we actually know about what causes it.

The current theory is that the beta-amyloid seems to operate at the surface of the cell, facilitating the entry and exit of other material. If that process goes wrong, malfunctioning beta-amyloids are thought to drift off from the nrueon and build up as Alzheimer’s characteristic plaques. They interfere with communication between neurons, which causes them to die off further and faster, expressed in the typical timeline of the disease.

But even that description is far from definitive, and if it was treatment would still be far from simple. Don’t believe any diet or exercise regime that claims to protect you from Alzheimers. All we know is that exercise helps the immune system which might fight the buildup of Alzheimers-related neuron damage. It also lightens your mood and depressed people are more prone to the disease, but that’s far from a definitive medical pathway.

In fact, the field is ripe for snake oil sales pitches that are applied to plenty of other areas. Brain training videos and games might be fun, but Jebelli and the experts he interviews for the book remind us that there’s no scientific measure of ‘smarter’ or anything like it. As one neurosurgeon says wryly, practising Sudoku puzzles will make you great at Sudoku, but that doesn’t mean they’re protecting you from dementia or other cognitive decline.

Like cancer, it’s not even a single disease. The bizarre Posterior Cortical Atrophy, also known as ‘visual Alzheimer’s’, leaves the person’s memory and sense of self mostly intact, instead causing hallucinations, the sudden loss of the ability to read, recognise faces and familiar environments. One sufferer even saw everything compltely upside down.

Not long after the first work decoding the human genome in the 1990s scientists found a mutation that seemed to cause Alzheimers in a certain family, but even if we had guaranteed gene editing techniques (like future iterations of CRISPR), the competing theories about the cause seem to prove there’s no single trigger.

More recent efforts at treatment have generated hope and excitement – plenty of it false. Some drug compounds and regimes have been shot down for apparently political reasons, with harder than usual test results imposed. Other experimental treatments almost seem to be in the realm of alchemy, like the blood plasma transfer from a healthy donor that almost wiped out symptoms in one sufferer, but which then couldn’t be replicated.

There’s a lot of medical science about things like how beta-amyloids behave like proteins, but just as much about the stories and experiences of sufferers. Jebelli spins a tale a century or more long, about a battle we have no idea when we’ll win.