Skip to content
June 1, 2021 in Reader's Digest See more stories from this title 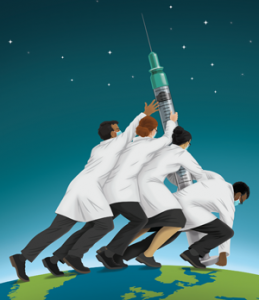 The scope and seriousness of COVID19 was bought home to many in March 2019 when it suddenly became impossible to travel anywhere and a famous actor got it.

Fast forward a year or so and a vaccine has been developed and given to 1.2 billion people. In many places travel restrictions are easing and even job markets have gone resolutely back to normal. How did we do that so fast, when we’ve been living with HIV for almost half a century, battled cholera for 200 years and evolved alongside the common cold for millennia?

The answer’s complicated. As Dr Kylie Quinn of the School of Health and Biomedical Sciences at Melbourne’s RMIT University explains, the trick to vaccines is to look for people who’ve been infected and recovered. “If you can see that in the population, you can be reasonably confident you can replicate it with a vaccine.”

Most people with COVID-19 have some immunity after they recover, just like most of us do against chicken pox. But it’s not true for all diseases – you can catch malaria repeatedly and HIV attacks the very immune system designed to protect you.

Another complicating factor is viruses – like every other life form – mutate and evolve, and some are better at it than others. The British Medical Bulletin published research in 2001 in which the genetic variation in a single patient HIV case was equal to those found in common cold cases across North America for an entire year.

So despite alarming news stories about vaccine-resistant strains, we’re actually lucky. It’s a relatively simple organism and prior research on other coronaviruses has given us a head start. Other diseases and infections are much harder to fight because we simply don’t have clear targets to go after.

Still, there’s no denying we got a COVID vaccine in breakneck time, and it was undoubtedly because of the resources we threw at it – Â£8.5bn from the US government alone. Dr Becca Flitter, a San Francisco, USA-based immunologist working on vaccine development, says it was entirely without precedent, even calling it a scientific miracle. “There was a groundswell we’ve never seen,” she says. “Suddenly scientists, clinicians and public health agencies all over the world needed to collaborate to develop vaccines as soon as possible.”

As US presidential medical advisor Dr Anthony Fauci said in an April 10 video, the race to a vaccine was ‘due to an extraordinary multidisciplinary effort involving basic clinical … science that had been underway for decades out of the spotlight.’ Flitter agrees, saying scientists shared data quickly not just by meeting virtually but publishing research on alternative platforms that didn’t always involve the months-long peer review process.

But the sharing didn’t stop there. MIT-educated biological engineer Dr Venky Soundaraajan of Cambridge, USA, says our ability to synthesise medical histories thanks to electronic health records and advances in AI is more powerful than even two years ago, revealing infection patterns and themes human eyes might not have spotted.

And governments – under extraordinary pressure as economies and industries collapsed – were aware the usual processes wouldn’t cut it. “Emergency countermeasures like vaccines can be available earlier in the regulatory process when the benefits outweigh the potential risks,” says American Board of Internal Medicine certified doctor Vikram Sengupta of Austin, USA, referring to America’s Emergency Use Authorisation (EUA), which left the usual development and approvals timeline of 5-10 years in the dust.

But here’s a disconcerting question; did we devote so much to COVID just because it was in the news so much? It sounds glib, but several of the scientists we talked to said interest in immunology and vaccines suddenly skyrocketed. Isn’t it easy to imagine a scientist working with Parkinson’s or heart disease grumbling that they could have done with just a little of that money and attention?

“Before the pandemic there was limited funding and interest in vaccine development,” Flitter says, adding that for better or worse, drug development and healthcare are free-market activities. “[Many other diseases] deserve attention, but few other illnesses suddenly crippled public health or imposed such economic hardship like COVID did.”

Of course, when a Hollywood actor falls victim to a pandemic it makes it feel like we were all at risk. “{COVID19] posed the greatest threat to high income countries in the beginning, so they really moved money and science to respond to it,” says Kate Elder, Senior Vaccines Policy Advisor, Médecins Sans Frontiéres, London.

A cynic might also suppose the pharmaceutical industry, after the billions of dollars and years of research that goes into drug development, just isn’t interested in cures that don’t give stockholders a decent return. “Sadly it’s all too obvious those diseases aren’t on the home front of the wealthy countries that hold the purse strings,” says Elder, “they’re not as motivated to address them and they become the responsibility of a handful of small health organisation that don’t have the resourcing we’ve seen with COVID.”

According to Immunologist and biologist Dr Jyotsna Shah of Milpitas, USA, every disease would get the same focus as COVID in a perfect world, but there are only so many resources from governments and private industry, and most will go to diseases with the highest fatality rate or profit potential. “The National Institutes of Health and the CDC spend just $90 and $35 per new case of Lyme disease respectively, compared to $53,571 and $14,054 on each new case of HIV/AIDS.”

But in physician William Li’s experience as an independent expert who’s consulted on drug development, people in biotech and pharmaceuticals are passionate in their quest to find effective disease treatments. “There’s no conspiracy,” he says, “[drug development is] just a really hard and long road.”

But pharmaceutical research is so tied up in IP rights, territorial licenses and pricing models even someone from inside the industry called ‘a big mess’.

Might the way we came together to tackle this crisis change that, paving the way for better-resourced disease research? Dr Bob Bollinger, Professor of Infectious Diseases at Baltimore, USA’s Johns Hopkins University School of Medicine, says it’s possible, particularly for public research. “Such fast development of tests and vaccines are a clear example of the collaboration between scientists and the importance of public investment,” he says. “Many of the scientists who made critical discoveries worked at universities and public agencies.”

Better yet – and back to the notion of responding to news cycles rather than health crises – we shouldn’t forget the advances in other fields even if there have been no grand announcements of cures. “We have two vaccines that prevent cancer and oral medications that can cure hepatitis C, one of the biggest causes of liver cancer. New classes of diabetes medications help reduce coronary vascular disease complications and reduce total mortality,” says family medicine physician Dr Puja Uppal of Michigan. “These are all huge accomplishments!”

It should also be kept in mind not just how much work led us here before the pandemic, but where the work on COVID might take us. Because years of study was so compressed, we’ve learned a lot about COVID vaccines as potential treatments for other diseases – everything from Ebola and Zika to influenza and cancer. “It’s the silver lining of the COVID pandemic,” according to Shah.

Soundaraajan goes further. “Two years from now the innovations in COVID, telemedicine and the AI revolution would have disrupted every conceivable field in medicine.”

So back to the original question – if we spend enough and put enough public and private experts together, can we cure anything? Eric Rubin, editor in chief of The New England Journal of Medicine is cautiously optimistic and circumspect in equal measure. “There are very few examples where the kinds of resources have been put into the development of vaccines … like in the current outbreak. Even though many diseases just aren’t amenable to straightforward approaches, it’s likely if we spent billions of dollars on each one we might have some breakthroughs.”

Elder hopes those of us in rich countries take the global interconnectedness COVID has revealed to heart, that our health is dependent on others. “It’s become a sort of adage that nobody is safe until everybody is.”

And as science and technology enthusiasts have long lamented, the age of exploration that let us sail around the world, unlock the secrets of nature and put men on the moon seems long gone. Maybe COVID has reminded us that – when faced with the imperative – we still have the spirit to come together and solve grand, society-spanning problems.

Can we do it again?