Skip to content
May 1, 2010 in Cosmos See more stories from this title 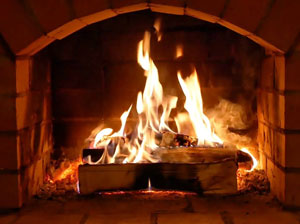 It’s not as sexy as the iPad, not as fashion conscious as the mobile phone and not hogging as many headlines as 3D, but there’s no older technology known to the human race than home heating.

Whether it was Prometheus stealing fire from the Gods of Olympus in Greek mythology or Homo Erectus first striking two stones together one and a half million years aago to produce a spark, somewhere along the line we had to learn to generate heat to protect us from the elements.

In the northernmost climes of the world where the Caucasian race originated it was a matter of evolutionary life and death, and even in the temperate zone cities of Australasia today the temperature can routinely fall into single digits — not much fun even if you can buy iPhone apps.

When it comes to going green it would seem obvious we should abandon carbon-emitting open fires in favour of gas or electric heating across society, but don’t forget the coal or fuel that’s been burned to put that electricity into the grid or pipe the gas into the network. Like in most technologies there are hidden costs, so looking for products like the following will save money and the earth.

Physics presents us with an inherent problem when it comes to heating a room — heat rises to the ceiling while we carry out our lives on the floor. Heating a whole room means filling it with hot air from the top down, a fairly inefficient way to do so.

Putting a heating device close to ground level helps a little, and carpets and fabrics retain heat a lot better than ceramic tiles or wood flooring. Those who have the latter know the value of good slippers first thing in the morning.

So heating a surface from underneath makes perfect sense. Heating elements or foils can be built in during construction of your house but there are plenty of ways to pull up the flooring and install it yourself without having to affect floor level too drastically. Obviously the floor space and type changes the costs considerably but you can expect to pay $40 (DIY) to $50 (installed) per metre under tiles and $45 (DIY) to $55 (installed) under carpet or timber.

The same technology allows for mat heaters and behind-mirror demisters, but they somehow seem like products for those with far too much money to spend.

It’s not news that the average Australian home is getting bigger or housing fewer people, so heating different rooms efficiently is a big concern. Before you end up with electric fan heaters, gas points and reverse cycle air conditioners all over the house, ducted gas heating in every room might be a better option.

Systems start at $2,500-3,000, but the control to heat only those rooms you’re using will let you shave a considerable amount off your bill. Meanwhile, gas is still the most environmentally friendly heating fuel.

Looking not unlike fluorescent lights, long wave heater strips are another way to combat the inefficiencies of losing heat upwards — especially in high-ceilinged areas like classrooms or churches.

They work by emitting heat with a long radiant wavelength. Instead of just pumping heat into a room to warm the air it heats the objects and surfaces in a room, which then radiate heat to the surrounding air. It still rises, but it’s coming from all around instead of just a heater unit. Expect to pay a few hundred dollars per unit.

Forget the old glowing orange bar heater that looks like a prop from a horror movie set in a dingy warehouse with chains and hooks hanging around the walls. The modern panel heater has a slimline design and sits unobtrusively in a corner or on a wall, emitting heat in virtual silence.

The electric fan heater can warm even large entertainment areas adequately. Expect to pay a few hundred to one or two thousand depending on the size and model, and running costs vary between just a few cents to 50 or 60 cents an hour.