Skip to content
August 19, 2004 in Xpress See more stories from this title 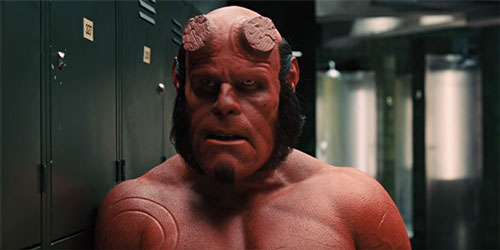 There are plenty of stars in Hollywood, but few true actors rise through the ranks. Before ditching his action hero mantle for governorship of California, Arnold Scharzenegger only ever played just one role. The only difference was where he was from (and whether the story took into account his Ah-nuld accent).

Watch any movie with Tom Cruise and Brad Pitt and you’ll see much the same; the flawed hero who proves inner worth and courage in the face of the ultimate test.

But some performers understand the true craft of acting; playing different people of different mettle, not just endlessly advancing stardom and lovability.

Such an actor is Ron Perlman. He’s the guy with the long face and blockish head you see everywhere and think ‘God, I know that guy, what’s he been in?’

Short answer; everything. With countless movie, TV, video game voiceover and animated series voiceover credits to his name, Perlman is remarkable mostly because of his ability to pop up in some of the most beloved arthouse, independent or critically acclaimed films (such as City of Lost Children, Enemy at the Gates, or The Last Supper) and be just as at home in commercial fare like Alien: Resurrection, Blade II, and now Hellboy.

It seems Perlman’s been extra choosy with roles, but as it turns out, his career’s simply been good to him, particularly as it almost ended before it began a little over ten years ago.

‘I’ve pretty much taken everything that’s come my way and I’ve just been very lucky that it’s been laced with so much good stuff,’ the 54 year old actor says from LA. ‘My first truly independent film, Cronos, was back in 1992, and it was almost as if I was reborn. I’d just come off a TV series and I’d lost my enthusiasm, the fire kind of went out.

‘So I meet this first time filmmaker [longtime collaborator Guillermo Del Toro] and it was so delightful and had such a great spirit, so I began searching out truly independent, first-time filmmakers. I’ve now done something like 22 films that were made for $2million or less, and it’s a great way to work.’

After performing in so many films with great ideas and superior scripts where the actors can’t hide behind grandstanding set pieces or special effects, I asked Perlman whether Hellboy was a brand new experience with all the effects shots, stunt work and the post production trappings that go with them.

‘Del Toro believes the real image trumps everything else and computer imaging should only be used as an enhancement, never as a replacement, and only when it’s absolutely essential,’ he says.

‘Admittedly there are fantastical elements to Hellboy so there’s a lot of special effects shots, but they’re all enhancing shots that were already there in the frame. I was fighting real monsters who were in suits like mine and it made it very conventional.’

And like Scorsese with De Niro, Tarantino with Thurman and Jordan with Ledger, Del Toro and Perlman have a symbiotic relationship together, one he is quick to characterise.

‘Trust is essential. I’ve been in a lot of situations where I’ve felt the director was an arsehole and thought ‘this is going to be like root canal’. So when you find the guy looking at the monitor is smarter than you and his ideas are way more evolved that yours, it’s very satisfying.

After the success of Hellboy in the US (to the extent that — in true Hollywood style — a sequel has already been announced), Perlman, Del Toro and co must be very satisfied. It’s not the best comic book adaptation around, and viewing it as a poor cousin to X Men (and playing up the ‘band of misunderstood freaks’ angle doesn’t do anything to dispel the inevitable comparisons) is easy to do.

On a remote, windswept Scottish island near the end of World War II, the Nazis are about to test their new ultimate super-weapon, a portal that will open a doorway to hell itself and give (of all people) the ongoing spirit of Grigori Rasputin strength to lead them to victory using the forces of darkness.

US marines, led by a young occultist, stop the Nazis in the nick of time and close the portal, but not before letting a single demon through — a strange baby with an oversized fist that the scientist adopts as an son.

In the present day, the grown Hellboy (Perlman) along with a small band of similarly unusual creatures, are soldiers in a top secret FBI division that fights the paranormal. The story deals with the ongoing mission of Rasputin, a creepy demigod (in the form of a half dog, half squid-like beast) awakened from sleep that duplicates itself every time one is killed, and the Bureau or Paranormal Defense charged with stopping them.

Nothing about Hellboy stands out further than any other action movie so far this year. The comedy is funny but not side splitting, the action solid but not breakneck, and the story flows but doesn’t really engage.

Del Toro looks to be slacking off for the money this time around, but it’s worth a look if you’re a fan of the genre.