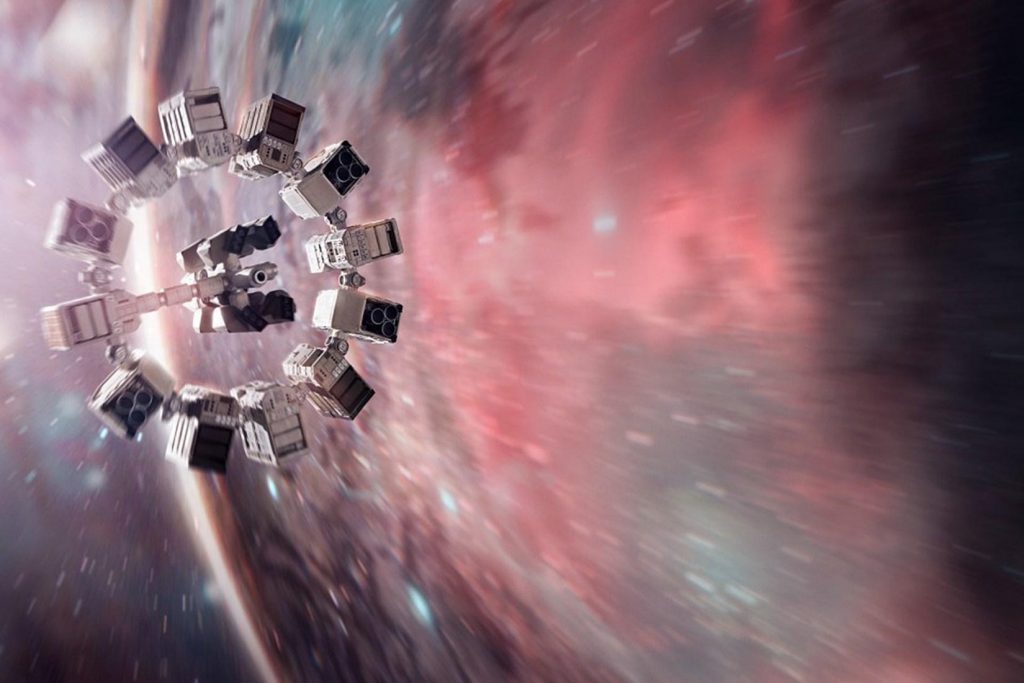 Into the inner and outerspace of Chris Nolan’s Interstellar, by Drew Turney.

Even though every Chris Nolan film is an event movie nowadays, his films are actually the perfect blend of personal and global, where small inner feelings cause ripples that can affect the larger world – in the case of Interstellar, the future of humanity.

Look close enough and you can clearly see one of Nolan’s motivations for the story of astronauts searching for a new home when it’s obvious Earth is dying. ‘We used to look up and wonder about our place in the stars,’ says Matthew McConaughey as test pilot-turned farmer Cooper, ‘now we just look down and worry about our place in the dirt.’

We need to look outwards again, Interstellar seems to be saying, and reclaim the spirit that put us at the top of the food chain, one of exploration and wonder. The director confirmed as much when SSN met him and the principal cast in Los Angeles. “It’s time to get back to looking outwards from the world,” Nolan says. “I’ve been asked a lot whether it’s worth investigating space travel versus problems we have here on Earth. It’s a false choice. We have to be exploring the universe.”

Nolan’s talent for making the infinite personal – crushingly, at times – is bought to life when Cooper pilots the crew searching for the new Earth, leaving his daughter Murphy (Mackenzie Foy) behind. Because of the mind-bending complexities of space and time, they’ve barely spent a few hours at their first survey site when decades have passed back home.

Still angry at his leaving and now her own father’s age, the adult Murph is played by Jessica Chastain, and the actress says she the role helped her crack the code of Interstellar’s personal side. “What I respond to in the film is the love aspect, the spiritual aspect,” Chastain says. “The idea that there is an intangible that connects all. Yes, you can understand science but you can’t understand and define love. It’s something to be felt. That’s what I believe art is. Art is not there to mark out and understand something you let wash over you. That’s why I’m excited about this film.”

Playing Murph’s father, McConaughey – a parent himself – had a different arc to travel. Like all Nolans films (even Interstellar, at nearly three hours), not a single phrase or scene is wasted, and even though Cooper leaves his children and world behind, his journey brings him back full circle in a way he never imagined, and in the end, it’s all about his beloved children (his grown son now played by Casey Affleck).

“Would I have been able to [leave Earth] before I had children?” The actor says in his distinctive (now Oscar-winning) drawl. “I think I could have. My first meeting with Chris was about family and fatherhood. I now know it has a lot to do with what I felt when I read it. I saw how I can have an original take on it and how it could be personal to me.”

Of course, alongside themes of family connection and love, it’s still a movie about spaceships, black holes, wormholes and time passing at different rates thanks to changes in gravity. Preparation for the actors involved everything from watching Carl Sagan’s documentary series Cosmos on DVD to meeting with Caltech theoretical physicist Kip Thorne, the film’s space consultant and executive producer. As Chastain puts it, “I had to completely understand words that were coming out of my mouth”.

“It was through understanding the physics that I understood the emotional landscape of my character,” Hathaway says of her role as Brand, one of the scientists who accompanies Cooper on their ship the Endurance. “In reading it I knew she was comfortable to say these things. Any one line I have in the movie would blow my mind for a week. But for her these are concepts she’s been comfortable with for a very long time.”

The science of Interstellar was also a kind of full circle trajectory for director and co-writer Nolan, who was inspired to become a filmmaker by the epic blockbusters and sci-fi of the golden era (the late 60s to the late 80s), something he hopes will help him inspire in turn.

“Almost all of my understanding of the science relates to watching Carl Sagan’s Cosmos, and there’s nothing in Interstellar that can’t be understood by watching that, that’s how good he was at communicating his ideas,” Nolan says. “There’s a whole generation of kids interested in science and space cemented by that. A high aspiration of this movie would be if Kip’s involvement can do that with kids today.”

In the end interstellar might be about nothing more than how this tiny home we share connects us all. There’s a scene of the Earth circling away in the distance as the Endurance begins its journey that echoes the famous photo ‘Pale blue dot’ taken of Earth by Voyager 1 from nearly four billion miles away.

It also reminds you of astronaut Jim Lovell talking about orbiting the moon and being able to hide the earth – everything we know and love and all our problems – behind a single thumb, and how insignificant it makes everything seem.

But that’s the beauty of being able to look back, according to Nolan. “The exciting thing was exploring the connections between us against this cosmic scale,” he says. “The more we journey into space the more that focus becomes clearer.”

“You have to leave all you know,” is how McConaughey puts it. “I understand my country, my family and everything else much better when I leave it and look back from another point of view.”

Points of view is what Chris Nolan is all about and so far, audiences seems to be agreeing with him.