Skip to content
October 21, 2014 in Zoo See more stories from this title 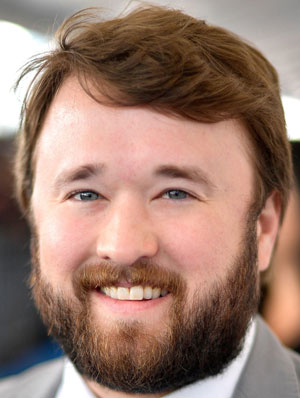 ZOO chats to the former child star about seeing dead people, working with Bruce Willis, getting arrested and his new horror/comedy, Tusk…

Have you ever used the line ‘I see dead people’ to impress girls?

No, I have not. I can say that for certain. Who would want to get with a girl because of something you did when you were eight. It’d be kind of creepy.

Ever get sick of being asked about that famous line from The Sixth Sense?

It gave me the opportunity to do all the other films that came after that, so I wouldn’t take it back. With anything there’s a certain level of privacy you lose but this is the job that I wanted.

Although things have evolved in the world because of the internet and it’s crazy living in LA with the paparazzi. There are parts that aren’t fun and seem unethical. The attention and the stuff that can seem overwhelming is just what comes with it. So you just have to learn ways to go on.

You’ve been working pretty constantly since The Sixth Sense, but you haven’t done anything really big since Spielberg’s AI. Has it been frustrating?

No, I just wasn’t in studio films. My mother is a sixth grade teacher and it was always ‘you are going to college no matter what’. So I basically wasn’t in LA from 2005 to 2010, then I started wading back into it. So I was busy at college in New York and doing some theatre.

When you’re not in Los Angeles you drop off the radar. You have to start from scratch with people. But getting to do projects on my terms has been really rewarding. Career trajectory is less enjoyable than the artistic appeal of those things.

You crashed your car aged 18 in 2006 and got arrested on DUI and pot possession. It wasn’t clever, but are we harder on celebrities for stuff like that just because of who they are?

You bring it upon yourself, you know. The worst part was doing something that could put other people in danger so in a way I look back on that and I was lucky. I will never do that again. Having it be a news story is terrible but in the end it goes away, you move on and it’s a good lesson.

Kevin Smith had a terrible time working with Kevin Smith on Cop Out. Was he a prick on The Sixth Sense set too?

It’s so weird. He worked with Kevin and Justin Long too [on Die Hard 4.0] and every time we talked about it I told them he was really good with me. Maybe it’s because I was a kid, maybe it depends on the project. I had nothing but a good experience with Bruce.

How did you get involved with Tusk?

It’s funny, a lot of people have asked us how we could agree to do a movie about a guy who turns another guy into a walrus. It wasn’t really pitched that way. It was more like ‘hey, do this movie with Kevin, Johnny Depp, Michael Parks and Justin Long’. I said ‘yep, I’m going to do it’.

When you read Tusk did you see it as a morality tale, a straight B monster movie or something else?

It’s been interesting just talking about the movie and people sort of unlocking the other layers that were there. I was aware of them when I read it for the first time but then you kind of have to put that away and just go into the specific character’s relationship. It’s not like Genesis [Rodriguez, co-star] and I made some decision to play it straight, and in fact Kevin’s thing before every take would be ‘remember to have fun’, which is important.

But it’s certainly a kind of fable. It has biblical undertones in a really weird way.

So tell us who your character Teddy is in Tusk.

He’s a counter weight to Justin Long’s character [Wallace]. He’s kind of the heart in that duo because Wallace has become cruel and exploitative. But Teddy’s a bit of a hypocrite because he’ll take the success of their podcast but he has misgivings about his relationship with Wallace. It’s also complicated because he’s developed a relationship with Wallace’s girlfriend Allison.

Johnny Depp’s also in Tusk in heavy make-up, and you and Genesis share an extended scene with him. You both played it straight where he was hamming it right up.

I guess it’s a sign that it went well because on set we took him very much at face value, treating it very real. And then in the theatre at the Toronto Film Festival with 2,000 other people I was laughing the loudest because I was seeing it for the first time in a way.

But it’s funny for me to watch as an audience member now because I can see how serious we’re being. Partly it’s because if you’re seen with Johnny Depp you want to do a good job but also it’s a scene where we think our friend has already been murdered.

You’re also attached to Kevin Smith’s next two films, Yoga Hosers and Anti-Claus. How does he compare as a director to M Night Shyamalan (The Sixth Sense) or Steven Spielberg?

The one thing they all have in common is that they’re all movie lovers. There are some directors who have fun with finding moments where they homage another film.

But just the scale of the movie was entirely different because this was a very focused, small, lean and mean independent picture. Kevin would be rewriting 15, 20 pages of it every day. And AI was just this juggernaut where we were filming on about five of the studios on the Warner lot.

You and Justin seem to have a real camaraderie. It seemed like you guys had known each other for years.

He’d been working for a week or two before me and Genesis got there. We just sort of had to get to know each other through the work. Movies are like that sometimes, you spend so many hours a day together and that’s the part I enjoyed the most because he’s a good guy to be around.

What was it like having reformed party animal Jason Mewes (Smith’s close friend who played drug dealer Jay to Smith’s Silent Bob) around the set?

He’s awesome. He had The Walking Dead board game set up in a trailer and we played that for days.