Skip to content
August 25, 2003 in The West Australian See more stories from this title 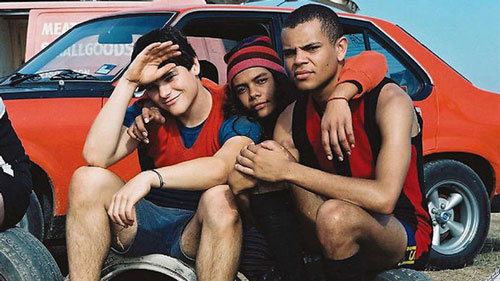 Like soft drink, cars and underwear, some filmmakers are a brand in themselves.

The advertising industry spends billions trying to invoke the peace of mind that assures consumers about what they’ll be getting for their money by buying a familiar brand.

Likewise, the stamp of certain filmmakers on a movie tells us all we need to know about the experience in store for us at the cinema. We see Jerry Bruckheimer movies for their generous lashings of rock and roll, action and adventure, and Baz Luhrmann films for otherworldly flamboyance and a sweeping sense of movement.

So it’s a big surprise to learn that the man behind The Night We Called it a Day, a comic look at an infamous episode in Australian history that opened this week, was responsible for 2002’s most bleak, harrowing and controversial Aussie film, Australian Rules.

But according to director Paul Goldman, the two aren’t so different — they both show a slice of something we all know and love — Australia.

“When the script was offered to me, I ended up reading it in one sitting,” Goldman says, explaining his inspiration to take on The Night We Called It a Day. “It had such a light-heartedness to it and I love the period.”

So putting names like Joel Edgerton, Rose Byrne, long time Hollywood insider Melanie Griffith and movie icon Dennis Hopper together had nothing to do with it? Don’t be silly’

“I genuinely liked the opportunity to get the best big name actors for legitimate reasons rather than just find roles for them because of the box office,” Goldman says, commenting on what must have been a dream cast.

Telling the story of Frank Sinatra’s infamous Australian visit in 1974, The Night We Called It a Day examines the debacle from the perspective of Rod Blue (Joel Edgerton of Star Wars II and Ned Kelly fame), the young promoter managing Sinatra’s tour. Setting the movie in such an iconic period as the mid 70s, was historical accuracy more important to Goldman than a simple good time?

“I’m sure some trainspotter will tell me I’ve got one of the cars wrong somewhere,” he says, “but the film’s a collision between historical fact and colourful fiction. I wasn’t interested in accuracy except in terms of research and what it might provide the actors and myself. We take a lend of something that will eventually become Australian folklore.”

“But the foreground was more important than kitschy fashions for me. I’ve seen films where the art department and wardrobe has got the better of the movie, and we just had such a great story to tell I didn’t want it to overplay itself.”

The bigger collision must have been between the working styles of some of Australia’s hottest young actors and some Hollywood veterans — particularly the legendary presence of Dennis Hopper.

“They had different working methods,” Goldman agrees, “But what was really amazing was when Dennis, Melanie and David [Hemmings] lifted the bar, the Australians came right back at them and lifted theirs too. It’s a tribute to Joel, Rose, David Field, Tony Barry and the supporting cast.”

Still, it must have been nerve wracking for a former cinematographer (Ghosts’ Of the Civil Dead) to be directing the likes of Hopper & Co. “Only that I’d be good enough,” he says, “like when there’s a problem to be solved on set and Dennis Hopper or Melanie Griffith are standing three feet away from you asking some very hard questions. But you occasionally stop and remember they’ve worked with some of the best — it’s scary at times but also inspiring.”

So after completing one of Australia’s best cinematic comments on race relations and a tongue in cheek look at the tour that sparked a national outrage, will the next Paul Goldman film be a huge departure from both?

“Some people ask how I made these two films in three years, but I like directors who change their style all the time — people like Stephen Soderbergh, who need to stay working but are very playful with their careers. I don’t want to take my career so seriously I disappear up myself, and there’s so many good stories to tell and great people to work with, so I’m not sure what I’m going to do next.”

But for now, Goldman can rest on his laurels for awhile in the glow of The Night We Called it a Day. Despite being a comedy, he says he only likes making films where there’s a subtext. “What I liked about it was the depiction of a very different Australia in a much more liberal era, with a brashness and rawness we still associate with this country but which I don’t think are really true any more.”