Skip to content
August 1, 2004 in Books & Publishing See more stories from this title 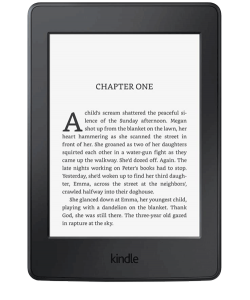 Ah, the heady days of the early Internet age. One day soon, we were promised, we’d all read books on a screen. With the information superhighway littered with the roadkill of many such failed prophecies and book lovers still enjoying the last laugh, e-books seem to have had their day.

But is it too early to write them off, as many did after the dotcom carnage? Depending on where you look, they’re thriving, and some believe they’re still set to explode.

As early e-books detractors pointed out, nobody wants to curl up in bed or lay on the beach with their computer. But books are for much more than just reading linearly.

The Internet has already supplanted much of the interactive, research and scholarly reading books used to serve. Going to a library to find a single piece of information (or even walking from your desk to the dictionary on your bookshelf) has been made obsolete. For what’s termed ‘information mining’ in fields like law, the humble book never stood a chance in the face of such ubiquitous connectivity.

The biggest problem with ebooks is still the lack of an agreeable machine to deliver them to a mass audience. PDA’s are becoming more popular but don’t have the reach of — for instance — mobile phones or PCs. Plus, there are still a handful of formats slugging it out for supremacy, PDF and Microsoft reader among them.

But despite the limitations, there’s definitely a market. If you run ebooks.com, things look good. Stephen Cole, managing director of the Perth-run ebooks.com, says business grew about 20% each month over the course of about a year and a half. ‘Each of the publishers we deal with recognises that although they get a small cheque from ebooks.com every fortnight, the cheques are getting bigger,’ he says.

‘The certainly seems to be a market for e-books,’ agrees Shona Martyn, publishing director at HarperCollins Australia. ‘Sex and erotica seem popular, and there’s also markets in academic areas and also fantasy, where fans of the genre are a bit more familiar with computer technology.’

The big end of town

So are the people who hold the reigns of the content — publishers — ready for the surge? ‘Publishers are ahead of the electronic books game now,’ says ebooks.com’s Stephen Cole. ‘They fell into disarray early on when they were spending anything from five to fifty million dollars to try to capture the market, but they’re no fools. Every major publisher now has a fully developed e-books strategy and a realistic view about the future.’

But most publishers don’t seem convinced about the inevitability of e-books. The consensus seems to be that the industry will simply wait in readiness for the market to take flight in whatever form.

‘The market for e-books worldwide at the moment is still very small,’ says HarperCollins’ Shona Martyn, ‘They’re certainly an opportunity and we wouldn’t want to not be involved, but the idea of three or four years ago that there’d be a quick take-off really hasn’t eventuated.’

Bryce Courtenay however thinks the publishing industry took the disappointment after the initial hype as meaning e-books are a non-event. ‘The publishing industry — having seen the initial failure — hasn’t worked out that it’s only a question of time,’ he says. ‘They don’t realise that most new technology fails initially but eventually catches up — and this is catching up at an alarming speed.

‘Some of the American publishers are beginning to wake up, but some smart e-book operators in America are very much on the ball. They’re undercutting the major publishers by going to authors and saying ‘give us your e-book rights’ and the publishers are saying ‘oh well, yeah, okay’, and that’s a disaster. I think we’re all going to be caught with our pants down in a very large way.’

A threat or a godsend?

Maybe the blanket terms ‘e-books’ itself is deceiving. There are markets within the field, some of them very healthy. And many believe e-books will add a new market avenue, not replace or threaten an existing one.

‘Our experience is that it’s almost never the case that our customers would have bought the real book,’ says ebooks.com’s Stephen Cole. ‘Every transaction we have happens because someone needs it now, they can’t get out of their house, it’s out of print, it’s going to take two weeks, they need it yesterday — any numbers of reasons. We’ve created our own new market over and above the one the bookstores service.’

Formal research bears this out. One of the most authoritative commentators on cyberspace — Forrester Research — had this to say on e-books in December 2000, well after the dotcom crash; Digital delivery of custom-printed books, textbooks and e-books will account for revenues of $7.8 billion — 17.5 percent of publishing industry revenues — in five years.

Sure, a lot’s changed since 2000, but if there hadn’t been some sort of profit growth, there wouldn’t be a commercial e-book in existence right now.

And after several decades in Australian advertising (to say nothing of being our most successful publishing phenomenon), Bryce Courtenay knows a thing or two about marketing. His prediction is more up to date but no less explosive.

‘In marketing, 8% of any population are known as early users,’ Courtenay says, ‘these are the people that are prepared to experiment or take a chance with new technology, and e-books haven’t yet reached that 8%. Right now in America, it’s roughly 4%, but moving up fast. After the critical mass of 8% of early users, it’ll spread like a bushfire.’

‘So suddenly we’ll find that the e-book will deliver an enormously usable niche market. About 40% of all readers only read novels, autobiographies, etc, at certain times of the year — mainly during the Christmas holidays. This niche market is going to be brilliantly served by e-books.

‘So what I expect to see in the very near future — and by that I mean three, four or five years, perhaps not even as long as that — is that we’re going to suddenly see an e-book culture take off in a big way.’

There’s a new threat to electronic text for immersive reading (as opposed to electronic books as a commodity). Just one area of interest burgeoning on the back of the digital MP3 player explosion is audio books, now set to expand their traditional reach beyond the car stereo.

Audio books have never enjoyed the same success in Australia that they do overseas, but being able to listen to a book on the bus, train or walking in the park might just tip the balance.

Audible.com and Australian company Bolinda.com both offer digital audio books for download (Bolinda’s products come down the line straight to your iTunes playlists), and while the price hasn’t come very close to that of a text e-book, they’re a viable alternative for many people who want to read but don’t want to lug books with them.

Giving the game away (sidebar)

The hysterical cries of ‘no fair’ by some European publishers over Googleprint are enough to make you think the publishing industry is under threat of extinction.

Together with Amazon’s look-inside-the-book technology, Googleprint offers — quite literally — the pages of a book on the web. It’s copyright material, say some of the big publishers. It’s another marketing avenue, says Stephen Cole of ebooks.com (who actually developed the technology to search inside the text of e-books before anybody).

‘Googleprint offers tremendous opportunities for readers and booksellers alike,’ he says. ‘A lot of our publishers are delighted because it’s another channel for sales. In the last few decades publishers have got their books into chemists, train stations and newsagents — any new channel is an opportunity. Obviously there are security issues about how much of the content you’re giving away, but they can all be fine tuned.’

And as HarperCollins’ Shona Martyn agrees, it’s just like looking through a bookstore or library. ‘We all know if you do that in a library or a bookshop you sometimes buy books and authors you never would have bought,’ she says. ‘I think the important thing is that these technologies are used for good marketing reasons instead of replacements for publishing.’