Skip to content
September 13, 2010 in The West Australian See more stories from this title 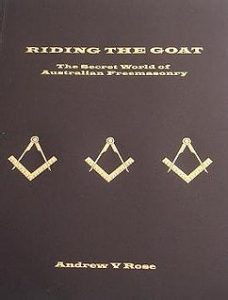 The Freemasonry movement enjoyed its most fertile period of public awareness in the late 1990s — for all the wrong reasons. The X Files led a mass movement that swept the world of TV series and movies about eloquent, secretive men met in dark rooms plotting the fate of the world while they tried to cover up the impending single world government and our contact with aliens.

Thanks to the considerable following of Dan Brown, another fever pitch of crazy conspiracies threatened recently. The Lost Symbol (Brown’s follow up to The Da Vinci Code) featured another deadly race against time through an ancient city, this time with the Freemasonry movement as the backdrop.

Dr Greg Levenston knew he didn’t have much time. As Grand Master of the United Grand Lodge of NSW and ACT, Levenston and his Lodgemates had decided on a project of historic openness. They were going to publish a book telling all about Freemasonry — the history, the beliefs, the tenets, the lot.

“[The Lost Symbol] was bound to stir public interest in Freemasonry,” Levenston told The West. “Instead of taking a defensive position we saw the book as the opportunity to go public. It let us show Freemasonry as open, ethical and keen to engage. The dark conspiracies have only been allowed to flourish because we’ve always been reluctant to talk about the Craft.”

And talk they do. The result is It’s No Secret, a 267 page tome published by the Museum of Freemasonry Foundation that lifts the lid on the stages Freemasons go through, the meaning behind all the associated symbols and what they really talk about at those Lodge meetings. In fact, the NSW/ACT Grand Lodge only keeps a few tidbits secret for themselves — the rituals of advancing through the order, the secret words of greeting and the famously oblique handshakes.

“The handshakes and words are the only things that need to be secret,” Levenston says. “Long before identity documents and trade certificates Masons used the handshakes and the words to identify themselves to one another and state their level of proficiency. They’re still used but it’s not necessary or common. Today they’re more important as a test of character — if a man can be trusted to keep a small secret like the handshake he’s likely to be trustworthy in every other way.”

And within the common references to good character lies Freemasonry’s big, dark secret. It’s not rich men overthrowing elected governments, it’s average blokes from plumbers to CEOs trying to be good people and enjoying the sense of camaraderie Australians used to get from trade unions and clubs. They run sponsorships and charities, produce gorgeous subtextual artwork (called Tracing Boards), and a large part of their belief system is about being the best you can be for your family, friends, self and community regardless of your religion (as long as you have one).

But plenty of people claim to have cracked Freemasonry’s secrets over the years — even the handshakes and rituals. Just a year after It’s No Secret’s publication, West Australian author Andrew Rose released an expose of the Craft called Riding the Goat. It’s an extensively researched book inspired by Rose wondering just what his father did all those nights he went ‘off to Lodge’, and Rose claims it contains all the secrets, including those few they don’t want you to know.

Greg Levenston is surprisingly circumspect when we bring up Riding the Goat and its divulging of his secrets. “It’s probably safe to assume secrets can’t be kept in a world where information is available in such abundance,” he thinks. “We’ve only tried to keep the rituals confidential to preserve the meaning for those who participate in them. Reading about an experience is not that same as having it, so while there’s no great reason to keep them secret there’s also no great reason to publish them.”

When even a voice from outside Freemasonry describes such a benign phenomenon, it feels like the conspiracy theories can finally be put to rest. If you read Riding the Goat hoping for sordid tales of world domination and animal sacrifices you’re going to be disappointed.

“There are lots of myths surrounding Freemasonry, and myths are hard to correct if they make a good story,” Rose says. “I started my research with an open mind, so when I discovered Freemasonry was just the world’s oldest and largest fraternity of friendship, charity and morality I wasn’t too surprised.”

But despite the new culture of openness Freemasonry still faces a few PR battles. For one, women are forbidden from the inner sanctums of the Lodge and rituals, not an easy thing to defend in this day and age. Not that Greg Levenston doesn’t try. “I think there’s now a new appreciation of the fact men and women enjoy spending time in their own groups,” he says, calling attention to a women’s group within Freemasonry called the Order of the Eastern Star or the Order of the Amaranth. Whatever the justification, the primary reason — much like the handshake thing — seems to be simply because that’s the way it’s always been.

“The question is, why does Craft Freemasonry continue to deny women when its membership has been in such severe decline — 90 percent from its peak?” says Andrew Rose. “The refusal to allow innovations like that this leaves Freemasonry in the doldrums.”

Which leads us to the next problem, one of unfortunate terminology. Freemasonry expressly forbids innovation, a powerfully positive word nowadays that makes its opponents look like a fusty old club of men trying to hold onto power — the picture many people have of the centuries-old Freemasonry movement.

But Greg Levenston actually thinks the Lodge is showing some progressive thinking. “Our program to engage, explain and dispel the myths is evidence of the innovation that’s possible and necessary in today’s society,” he says. No word however on whether he’s likely to have his throat cut across and tongue torn out by the root for breaking the rules — traditional punishments for speaking out that were thankfully dropped from the constitutions of most Lodges during the 1980s.

And to show it’s more than just a meeting of men in silly outfits in beautifully adorned secret chambers, part of the new plan to get the message out is to highlight Freemasonry’s community assistance work. The Grand Lodge of NSW and ACT has developed 40 aged care facilities, has a formal charity body called MasonIcare and donates everything from medical equipment to university sponsorships.

But with the club culture that made Freemasonry so popular in seemingly terminal decline in a world where we connect electronically more and more, the movement might have bigger problems than Dan Brown novels and conspiracy theories to overcome…