Skip to content
February 3, 2009 in Penthouse See more stories from this title 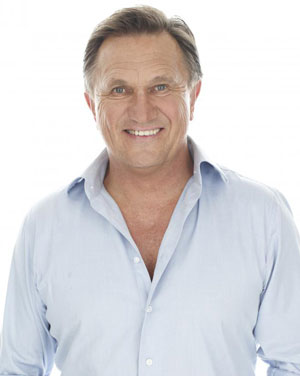 The Aussie icon on Underbelly, surfing and designs on Hollywood. Keep your flashy Nicoles, Hughs, Heaths, Russells and Erics. For the cream of Australian acting talent, look to the old school. And standing at the vanguard is a performer so true blue they named our favourite car after him …or was it the other way round?

It’s nice to talk to a living Australian legend.

Put an emphasis on that word ‘living.’

You’ve had a cracking time lately with Underbelly and The Strip coming up, are you enjoying TV?

Oh yeah. I hadn’t done any TV for a little while. The last long running TV thing I did was Something in the Air, which was on ABC and that finished in about 2002, so it’s good to get back in the saddle.

You play cops in both shows, does that say something about a thwarted childhood ambition?

No, that’s what they seem to write, cops or doctors. That’s just the television staple, it’s fertile ground for drama and characters. What I try and do is focus on the character — not just the fact that he’s a cop — but a person with a background.

There aren’t a lot of bad guys in your back catalogue. Is there a dark side that we haven’t seen yet or are you just a nice guy?

I’ve played nasty guys, just not in lead roles. But really my face is so angelic, it would be hard for an audience to buy the fact that I was nasty – I hope that irony comes across in print.

Having done both, do you have a favourite out of film and TV?

On film you get more time to manufacture and deliver the performance and there’s a lot more attention to detail. But on the other hand a lot less people see it so you tend to ask yourself what the point was.

TV’s a headlong rush but with any luck maybe a million people a week will see it — maybe two million in the case of Underbelly. So they’re both different disciplines and I enjoy them both.

Why don’t our films perform?

There’s something the whole industry can learn from Underbelly ? if you write big characters getting involved in big situations the audience will buy it. There’s a bit of a fault certainly in Australian film making that they shy away from the big moment, they want to underplay everything.

You’re also a muso from way back. Are you still doing any gigs or recording?

I’m not doing any recording or club work but I do 15 or 20 corporate gigs a year. A lot of them are with Wilbur Wilde who was in Ol’ 55 with me. Often we do an all-star line up with Ross Wilson, Joe Camilleri, Glenn Shorrock or Russell Morris. It’s great fun and a real privilege for me to be in that sort of company so I really enjoy it.

Do you still get comments from Ol’ 55 fans?

I was only in that band for three years and it still holds me in good stead all these years later. I’m still working off it and I still get just as many people come up to me and say they’re Ol’ 55 fans as there are people who come up and say they’re Underbelly fans.

You’ve been in the entertainment business since the 70s. How’s it changed?

It’s still a hard slog for actors but there’s a light at the end of the tunnel now called America.

Nowadays you just need that one project to open up doors for you but I don’t think that was happening so much in the 70s or 80s and probably into the 90s. So the Aussies working overseas now are quite remarkable but if you stay in this country it’s as hard as it ever was. You can’t be too precious and you’ve got to try and be as versatile as you can.

Any reason why you haven’t moved to LA with all your experience?

I’ve thought about that and what I’ve worked out is that to be a big movie star in Hollywood you have to have that certain thing called the ‘it’ factor. I’ve got the ‘what???’ factor. Russell Crowe has got ‘it’ and Frankie J Holden has got ‘what???’

But I never really had any interest in that. I’ve worked with Russell Crowe and Meryl Streep and Martin Sheen and held my own so I’m happy with that.

No twinges of jealousy when you see the huge salaries, limos and parties for Aussie stars like Russell and Nicole?

No, because they earn their money. I don’t know whether they earn the vast amounts of money they get but they do deserve to get paid for what they go through.

I was working with Eric Bana on Something in the Air when he got the call from Ridley Scott asking him to be in Black Hawk Down. He was very excited, and a year later when he came back he said he really worked for it. It’s a matter of scale. I’m sitting here on my deck, I’ve had a surf this morning, the sun’s shining and I have the Pacific Ocean stretched out before me. What have I got to be upset about?