Skip to content
November 1, 2007 in Desktop See more stories from this title 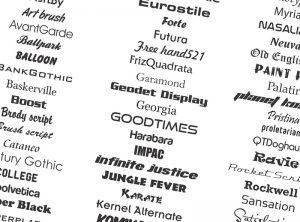 Your font activation software is the application you want to spend the least amount of time in. When we need a font added to our system or made active, we just need it to work, not give us any trouble. It’s a methodology industry leader Suitcase had right for a long time before their last few versions became too bloated and buggy, usually crashing before you’d even activated a single font.

The first thing any new font manager needs to do is handle a big task. Why? Because when you install it the first thing you’re going to do is dump every font you have in it — several thousand for many designers. The perfect font manager will let you drag a single folder (or dozens of them) into it and then leave you alone while it sorts everything out.

That’s just what FontAgent Pro did. Desktop dropped our existing font collection — a folder of over 650Mb — into FontAgent after very reluctantly moving up from the outdated but brilliant Font Reserve.

FontAgent Pro acts as slickly and leanly as it looks, steadily and beautifully processing everything. It creates a My Fonts folder in the Documents folder of your user account and arranges all the files alphabetically so it’s easy to back up. There’s also a folder called Problem Fonts, and that’s where the real magic of FontAgent Pro happens. Every time you add fonts it automatically scans for corrupt files, duplicate fonts, printer fonts without screen fonts and vice versa, giving you a detailed report each time.

When we started up for the first time after installation, our Times New Roman had gone badly pear shaped. If the same thing happens to you and you don’t know anything about font caching, now’s the time to learn. We used a utility called Smasher that ‘cleans’ your fonts out by stripping out extraneous multiple versions of fonts in suitcases and clears all the font caches kept by the system and applications. It essentially removes all the information a computer remembers about what a font looks like and tells the system to go back to the font and look again — what we needed for our Times New Roman problem. As a nice bonus, it reduced our font collection from 650Mb to less than 500Mb.

So with a clean bill of health on a much healthier and more organised collection, it was time to start activating and using fonts. FontAgent Pro has an auto activation feature, but for some reason it only worked when opening Microsoft HTML emails in Microsoft Entourage during testing. Design applications like Adobe Creative Suite and Quark Xpress required a return to FontAgent Pro to find and activate them manually. The application appears to think the system fonts have been auto activated and ignores the rest.

Finding the font you want to activate could also be a little easier. It scrolls through the list of available fonts very slowly so it’s faster to type the name into the search box at the top of the list. When you do so the rest disappear and to start again you have to clear the search box and hit ‘enter’ to bring up the entire list once more.

It’s a well laid out program, with everything you need in one small area from the preview of the selected font to the list of available fonts and your current font sets. And despite some minor hiccups, having a font manager that churns through your collection and streamlines everything without a hitch is enough of a pleasure to make the investment.

A cool feature is the font player that goes through your fonts one at a time, displaying samples as if in a slideshow, and there are some very solid sharing and network functionalities.