Skip to content
November 1, 2006 in Capture See more stories from this title 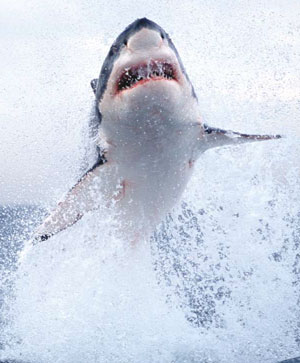 What’s the scariest thing that can happen in the water? How about a three metre shark bursting through the surface? Chris and Monique Fallows love it, and Drew Turney asks why.

When Capture first approached renowned shark photographers, husband and wife team Chris and Monique Fallows for a story on their activities we promised to mention the ‘J’ word as litle as possible. With infinite patience, Monique explains their frustration at the film having galvanised sharks’ media image as bloodthirsty maneaters as well as fuelled our collective fascination.

It’s a fascination the Fallows’ have tapped and they now make a living that revolves around the sharks and wildlife of Africa. Their business, Apex Images, markets specialists tours which generates business from a mostly international customer base. Monique estiamtes that 90 percent of tours business comes from overseas, most from the US. As something of a disclaimer, she adds that the tours target people she describes as ‘serious naturalists’.

Another major revenue stream is guiding and facilitating film crews from some of the leading nature series and producers around the world including those from The Discovery Channel and the BBC. Most of that work, Monique says, comes from both word of mouth and repeat business.

Their expertise has resulted in Apex Images’ website (apexpredators.com), which received 80-100,000 hits per month and provides not just sales information for tours but one of the most informed datasets on Great Whites and other local sharks in the world thanks to such close study.

Together with other scientific data, the Fallows’ work has revealed just some of the mysteries about the lives of our most feared predator. Among the discoveries made is that individual sharks have been tracked everywhere from California to the southern coast of Australia and everywhere in between.

And while their movements through the oceans can be both mysterious and erratic, South Africa is a Mecca for the Great White. The area of Seal Island in False Bay off the South African Coast is the centre of the action for tours, photography and film crews, the area having proven one of the most reliable shark-spotting grounds in the world.

It’s in this hunting ground that the Fallows’ make their base. “The topography of Seal Island creates a perfect hunting ground,” Monique Fallows explains. “The waters become deep very quickly off the island and that’s where the seals hunt for their own food. The sharks patrol the deeper water relatively undetected and attack with great vertical speed as the seals swim on the surface.”

And while we think of sharks as silent, lone killers, it’s fascinating to learn that they have something of a society, even communication. “Although they’re solitary animals they may move in loosely associated groups, fairly often we’ll see the same sharks together at the same time,” Fallows says.

A smaller shark will give way to a bigger one (naturally, it would seem), and observers sometimes see a shark dropping its pectoral fin, gaping or even arching its back, signs believed to mean ‘give way’ or ‘back off’.

Such signals might also account for a great many attacks on people. The claim that black wetsuits cause sharks to mistake us for seals might not be strictly true, but Monique Fallows thinks mistaken identity could play a major part. “A surfer on a surfboard could well look like a shark with lowered pectoral fins,” she theorises. “Or a shark could be giving signals asserting itself to swimmers and not getting a reaction. What do know for certain is that humans aren’t on white sharks’ preferred prey list. If we were there’d be shark attacks every day.”

A Day at the Office

Partner Chris got his start in shark photography from his father, a keen amateur photographer. After discovering the hunting ground near Seal Island, Fallows taught himself photography to capture some of their magical appearances. With partner Monique, he plans and conducts tours not only of the shark hunting grounds but also all over Africa in search of sharks, other marine life and bird life.

Monique credits the advent of digital with allowing Chris to hone his craft, especially underwater. “It was all trial and error,” she says. “Chris has never studied underwater photography but we’ve had a lot of advice from other photography friends. Digital allowed him to see what errors he was making while he was in the water and improve them straight away. All his photographs of sharks (other than white sharks) are taken while free diving and knowledge of the animal helps greatly in anticipating what they’re going to do.”

Then there are the technical limitations. If you’ve ever tried to take a decent photo from a boat at sea you’ll know it can be an exercise in frustration — just staying upright is often challenging enough. “Not every day is calm,” Fallows agrees, “which means you can’t use a tripod or a long lens. Plus natural predations (the term for an attack) usually take place in low light conditions so you need very good lenses and you need to be stable.”

Besides the eco?tourism that shares the wonder of sharks with the public, the Fallows are sought-after experts in the field and have taken part in several high profile TV and magazine projects. In collaboration with National Geographic, the BBC and the Discovery Channel, they’ve helped produce films and series such as Blue Planet, Smart Sharks, Air Jaws, and Great White, Deep Trouble as well as the two part National Geographic piece Photographing Africa’s Flying Sharks.

The Fallows’ have been canny in making a living from their passion. They use mostly digital and when a photo is blown up to the size of the larger prints (some editions are available up to 1500x80cm), there’s no discernible reduction in image quality.

Enabled with e-commerce, apexpredators.com sells everything from large prints to postcard packs, but Monique believes that a good stock service shouldn’t be overlooked.

‘We use two very good photo agencies that specialise in marine images,” she says, “Seapics.com and [Australian service] Oceanwide Images. Stock agencies take 50% commission, but if you can find a good agent it’s very worthwhile. A lot of the time they have a large client base which comes directly to them, so if your images are the best to choose from you can get a high sale rate.”

As with everything in the photographic world, there are costs. Aside from simply the cost of procuring and maintaing photographic equipment itself, Apex Predators has services to market, and that’s not free. After the outlay for the website it needs maintenance to continue to market the images for sale — especially with the Fallows’ often booked solid with work in the sharks’ high season. Then there’s maintenance and equipment upgrades. Asked if they could survive by photography alone, Monique says “probably, but not very well.”

In a unique and lucky position many of us want to be in — making a living from following their passion – Chris and Monique Fallows have taught themselves the skills they needed to capture some of the most fascinating and frightening images of the animal kingdom, and they see their work as far more than a career.

“It had a devastating effect on sharks,” Monique says of Jaws, the film that changed the picture of shark in popular consciousness. “People want to catch and kill great white sharks because they thought it was a dangerous man-eater. But when we ask people about their interest in sharks I’d say 90% of them say ‘Jaws’. The only good thing it did was drawing attention to white sharks and making people want to learn more about them.”