Skip to content
November 13, 2006 in People See more stories from this title 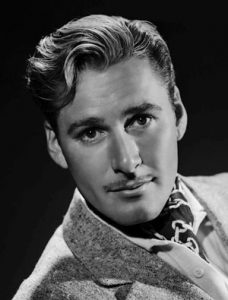 The wild Aussie actor was such a stud, he inspired the phrase: ‘In like Flynn’.

IT WAS no surprise actor ERROL FLYNN succumbed to a heart attack in 1959 at age 50. His passion for such off-screen pastimes as fighting, boozing, shagging and more shagging finally caught up with him. But the Oz heart-throb didn’t give a shit. In his autobiography My Wicked, Wicked Ways he wrote, “I intend to live the first half of my life. I don’t care about the rest.”

HISTORY’S first world-famous Australian, Errol Flynn was born in Hobart in 1909. His father was a biologist and his mother was a direct descendant of HMS Bounty mutiny leader Fletcher Christian.

School wasn’t for Errol – filled with an adventurous spirit, the ruggedly handsome lad was still in his teens when he travelled to New Guinea to prospect for gold. Instead, he found malaria, but his exploits gained him a reputation – he was hired to work on a movie documentary while sailing his yacht The Sirocco upriver in New Guinea.

Aussie director Charles Chauvel saw the doco and offered Flynn the lead in his adventure flick In The Wake Of The Bounty (1933). Ironically, he portrayed Fletcher Christian, an experience that convinced him there might be a career in this acting caper.

Errol travelled through Asia and Europe before joining a theatre troupe in England. By coincidence, Warner Bros’ British boss Irving Asher caught one of Flynn’s stage performances and convinced studio head Jack Warner to take a look at this hot new prospect.

Jack also saw something in the good-looking young Aussie and offered him a film contract.

Errol’s first few roles were small, but the lead part in Captain Blood (1935) set him on the path to Hollywood stardom. He used his charisma in fillums like Charge Of The Light Brigade (1936) and The Adventures Of Robin Hood (1938) to cement that reputation, while creating the template for a new kind of swashbuckling action movie hero.

Errol did his best to live up to the devil-may-care, macho image away from the cameras, too.

FLYNN’S love of punch-ups, piss-ups and pussy eventually made him as famous as his flicks. Despite being married three times and fathering four children (that we know of), Errol let loose in Tinseltown was like a kid in a toyshop.

UK movie magazine Total Film described a visit by Flynn’s father to the Warner Bros’ lot, where he found the actor fucking a young starlet in an empty room. Errol politely asked his dad to give him a minute and sit down while he finished.

Flynn once said, “I like my whiskey old and my women young.”

The Los Angeles DA called him on it in 1942, charging him with the statutory rape of two women, 17-year-old Betty Hansen and 16-year-old Peggy Satterlee. The trial exposed the sexual antics Warner Bros had tried to keep secret and made front page news around the world.

Flynn was acquitted thanks to a combination of him charming the mostly female jury and lawyer Jerry Geisler discrediting the testimonies of both girls. To many, the presumption of guilt remained. To others, it sealed Flynn’s status as a legend.

This included his fans in the armed forces, who coined the infamous term we still use for a lucky bastard who enjoys success with chicks using nothing but arse.

Nobody – not even Errol himself – disputed his reputation as a skirt chaser. He suggested in a 1950 interview his gravestone should read, “If it moved, Flynn fucked it.”

ANOTHER passion Errol embraced wholeheartedly was drinking, a habit that started to age him prematurely by the 1950s. By the time he was being taken seriously as an actor, he looking bloated and old, very much the washed-up alcoholic in the well-received The Sun Also Rises (1957).

Second wife Nora Eddington moved in with him, but despite being described as a good husband and father by his daughter Rory (on her web site inlikeflynn.net), Flynn’s restlessness and thirst for adventure gnawed at him. He still rooted every leading lady he could get his hands on, and his destructive addiction to morphine broke up the marriage in 1949.

Alcohol and morphine weren’t Errol’s only addictions, though. A fan of science and keen sailor, he also loved literature and was himself a talented novelist.

EMBOLDENED by his success, Flynn began putting together a huge European production of William Tell for release in 1953. Unfortunately, his Italian partners pulled out and Errol was left to face a financial shit storm. Worse still, he was sued by his intended co-star Bruce Cabot (of King Kong fame), who ended up with his cars, clothes and most of his possessions.

A year later, Flynn discovered his accountant (by then deceased) had stolen his fortune and left him with a $1 million tax debt. Rather than declare bankruptcy, he began selling off his assets. When his first wife won his house in an alimony hearing, Errol relocated to one of his yachts, the Zaca.

FLYNN had grown bored with the acting biz long before his private life spiralled out of control. Errol wanted to take on darker roles but Warners didn’t agree. After the studio gave him a series of smaller parts in cheaper films, both parties agreed to prematurely end his contract in 1939.

For a time, his third wife Patricia Wymore’s work as an actress kept them afloat. But that ended in 1958, when our randy Romeo shacked up with 16-year-old Beverley Aadland.

When the revolution broke out in 1959, Errol travelled to Cuba to meet Fidel Castro – referred to in My Wicked Wicked Ways a “friend” who he “admired” – writing articles for the US and UK press talking up the communist leader. He also made a short documentary about the revolution called Cuban Rebel Girls with his teenage floozy.

Still trying to clear his debt, Flynn took Aadland to Vancouver to sell one of his yachts. It was there, on October 14, 1959, that he took his final bow. Errol had excused himself from a party, saying he felt sick. When Aadland went to check on him, he was in the midst of a massive heart attack. He died in her arms, aged just 50.

It was an end to the man but not the legend. Along with the wild stories about his life, Errol Flynn lives on in an Australian Crawl song and one of the coolest innuendos in the English language.

THERE have been so many stories about Errol Flynn over the years, it’s hard to separate truth from bullshit. Here are some of the better ones.

* On arriving in Tinseltown in the 30s, he claimed to be Irish, believing nobody would take an Aussie seriously

* He was friends with Professor Hermann Erben, who unbeknownst to him was a Nazi spy. For this reason, he was under FBI surveillance throughout WW2

* Marilyn Monroe reckoned she saw him use his cock to play the piano at a Hollywood party, AND

* While making Dodge City, he reportedly showed his disdain for director Michael Curtiz by turning his back to “loudly break wind”.

A bounty of bios

THERE have been at least five books about Errol’s life, including his famous autobiography, each contradicting the other and adding to the myth.

The recollections of the man behind the penis, detailing his endless shagging and hell-raising. Said by many to be “exaggerated”.

The one that recast Flynn as a villain by claiming he was a Nazi sympathiser and spy. Mostly dismissed as crap nowadays, but less forgotten are the stories of affairs with Bruce Cabot, Tyrone Power, Truman Capote and Howard Hughes.

Discredits Higham’s Nazi story, but upholds the claims of sexual affairs with men. Calls Flynn “a pervert and a lecher” and claims he masturbated into omelettes before serving them to guests.

The Baron Of Mulholland – Rory Flynn

His daughter attempts to reposition her famous dad as a family man. Fails.

ONE conspiracy theory about Flynn’s infamous rape trial suggests the LA District Attorney set the whole thing up to draw attention to the debauchery in Hollywood.

Another claims the cops cut a deal with Satterlee and Hanson, promising to forget about their sordid pasts of blow jobs and abortions if they testified against Flynn.

The wildest theory concerns an influential politician who had enjoyed the patronage and support of Warner Bros head Jack Warner. When he lost an election, he decided to hang Warner’s golden boy out to dry as a lesson – hence the allegations against Errol.

‘I intend to live the first half of my life. I don’t care about the rest’

He suggested in an interview his gravestone should read, ‘If it moved, Flynn fucked it’

‘I like my whiskey old and my women young’

Flynn’s father found the actor fucking a young starlet. Errol asked his dad to sit down while he finished