Skip to content
May 21, 2012 in The West Australian See more stories from this title 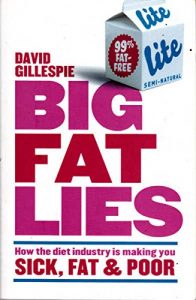 Work out all you want. Buy all the supplements you like. The former is great for cardiovascular health but it won’t cause you to lose weight, and the latter might be worse than useless. According to author David Gillespie in his latest book Big Fat Lies, there are only a handful of very simple things to watch for.

The challenge you face no matter what you’d like to look like or how much you’d like to weigh is that your body is genetically predetermined to be a certain height and weight that has nothing to do with the ideal set by the media. Your digestive system is remarkably efficient at using whatever you eat to keep you at those levels, extracting every last kilojoule it needs to do so and discarding the rest if you eat too much. You don’t often hear this, but it can be as difficult to put weight on as it can be to lose it.

Or it would be except for two factors – two common food ingredients we’ve introduced into human food sources over the last century and a half (the blink of an eye in evolutionary terms) – sugar and polyunsaturated fats. Quite simply, Gillespie says sugar is making you fat and polyunsaturated fat is increasing your risk of cancer.

If you’re skeptical, you won’t be alone. Gillespie’s a lawyer rather than a doctor or scientist and he’s well aware his advice runs counter to the various entrenched food authorities. Even if we can believe diet companies’ interests are their revenue rather than our health, what about the government health bodies with their 2 and 5 campaigns, etc?

As he urges us in Big Fat Lies and when The West spoke to him over the phone at his Sydney home, don’t take his word for it – the information’s all there if you want it. “I don’t ask anyone to believe anything I said,” Gillespie explains. “It’s not about belief, it’s about evidence. So I don’t have much time for being who believe or don’t believe what I say based on who I am. What I do have time for is someone who thinks I’ve presented the evidence, will read it themselves and make up their own mind.”

To Davies, the disinformation that’s found its way into society about health doesn’t require a grand conspiracy of X-Files proportions. Everyone’s reading from the same incorrect material (including your doctor, who has no hope of keeping up with the torrent of research him or herself), most of it composed with a vested interest. Among his claims is that the various seed oils like canola and vegetable oils became mass-produced because of the economic infrastructure of the early industrial revolution, even though they’re bad for us where palm and police oils are much healthier.

Among those laboring under illusions are the various industries to which we turn when we’re desperate to lose weight. “I don’t think diet companies set out for us not to succeed,” Gillespie says when The West suggests that if we lost weight like we wanted they’d lose a customer. “I think they genuinely believe what’s going on is that their customers stop following their rules at some point. So you go to company A, their diet doesn’t work so you go to company B and so on.”

Big Fat Lies isn’t Gillespie’s first book on the subject, and even though there’s no X-Files conspiracy, doesn’t he feel a little like Fox Mulder at times? “We’ve become increasingly dependent on quasi research provided often by people who have significant conflicts of interest,” Gillespie says of his research. “Most of the information provided has an ulterior motive and it’s rarely, rarely declared. I certainly get criticism from the health establishment. There are a lot of people who don’t want to look at my research but say ‘he’s a lawyer, he shouldn’t be believed’.”

The attacks, Gillespie says, come from bodies that have noble motives but simply don’t realise how dangerous the products they promote are because they contain one of our unhealthiest addictions – sugar. “As a general rule I’m attacked by the GI Foundation because GI accreditation and symbols are generally on products which contain a large amount of sugar.

“I’m also being fairly regularly attacked by the Heart Foundation because I pointed out it’s is a reliable guide to high sugar products in supermarkets. 44 of the 46 breakfast cereals sold by Nestle in Australia are Heart Foundation approved and yet most of them are more than a quarter sugar.”

Big Fat Lies has plenty of hard science if you want, but Gillespie’s point in relaying it is that he believes the weight gain and cancer that sugar and polyunsaturated fats cause is no secret if you’ve done your homework. So if you’re one of the many on an endless treadmill watching one exercise scheme and diet after another fail you, he provides a clear, compelling view that deserves your attention.

Nutrition according to Big Fat Lies

It sounds disingenuous – sugars and fats are essential to the smooth running of the human body. The trick according to Gillespie is to avoid the wrong kind of fat (polyunsaturated) and the sugar we add to food, which contains harmful fructose.

Trying to spot them in supermarkets can be nightmarish. Despite your best efforts, packaging standards and laws in Australia don’t make it compulsory to disclose them in ingredients. Gillespie thinks the below is a good start.

* Avoid grain and seed oils, use olive or coconut oil.

* It’s bad news, but all confectionary such as biscuits and ice cream are out, and muesli bars are no better for you than Tim Tams (however, if you plan never to put another piece of chocolate in your mouth for the rest of your life, The West recommends occasional employment of the What’s The Hell’s Life For? rule).

* Avoid flavoured drinks including soft drink, bottled fruit juice (which is loaded with sugar, natural or otherwise) and flavoured milk. Drink full cream milk or water and instead of orange juice, just eat an orange. Fruit contains fructose but it also contains fibre to mitigate the negative effects.

* Beer, wine and most spirits are fine, but not liqueurs, dessert wines or ciders.

* Breakfast cereals are minefields of sugar. Avoid them altogether and enjoy protein such as meat or eggs for breakfast (Big Fat Lies has plenty to say about ‘good’ and ‘bad’ cholesterol).

* Most condiments and sauces are too full of sugar.

* Avoid adding sugar to food where you can, including in tea or coffee.

The good news is that anything that doesn’t taste sweet is basically okay, including foods that have suffered bad reputations over the last few decades such as red meat, bread and pasta.