Skip to content
September 3, 2006 in Filmink See more stories from this title 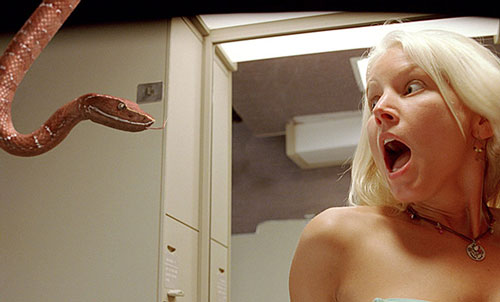 Around four months ago, a buzz arose on the Internet about a film New Line cinema was making that had what must have been the coolest title ever; Snakes on a Plane.

Call it the Snakes meme (the word coined to describe a slice of cultural relevance transmitted by various media much like a biological gene). What isn’t there to like about a movie with a premise so simple yet intriguing, with the potential for great visuals and old-time, B-grade horror?

Online movie geeks loved it, and they made it a phenomenon. In years to come, when film magazines run the inevitable 25 films that changed the world, Snakes will be up there with Jaws, Blair Witch, Easy Rider and Blame It On Rio (perhaps not).

Movie buffs hanging around in online forums got so excited at the possibilities, New Line pulled director David R Ellis and star Samuel L Jackson back in to beef up the thrills, language and violence.

It was a first because the studio went to that effort and cost in response to fan demand in a unique new way — by the buzz on the Internet. They knew releasing a lame PG thriller without tapping the idea’s true potential would cause a very expensive backlash.

So it was with disappointment and some disbelief that Snakes, budgeted at USD$30m, limped past $USD15m on its weekend of release and is yet to make a profit. With amount of buzz it had, everyone expected it to blow the ceiling off market expectations.

What does the film’s lacklustre performance so far teach us?

Firstly, New Line famously refused to show the film to any media outlets prior to the release, both them and director Ellis claiming Snakes was a ‘fan’s movie’, not one critics would respond to.

But a lot more professional movie critics now in the industry were just some of the millions of kids lining up around the block to see Star Wars in 1977 with their Imperial stormtrooper outfit on, and in calling Snakes a fan’s movie, New Line forget that most film critics aren’t cine-snobs, they’re movie fans like the rest of us and were just as intrigued by a movie called Snakes on a Plane.

What’s more, the media plays a double-edged part in film promotion. Sure, everyone might dismiss your film as rubbish, but at least everyone will be talking about it. Even if the chin-scratchers haven’t read the review, they’ve seen the movie’s name in the paper.

Who are the chin-scratchers? They’re not like us hardcore film fans who know everything down to the first assistant directors, the locations and all the actors’ previous work. They go to the movies on a Friday night and stand in front of the ticket counter scratching their chin, saying to themselves ‘that looks good, it’s got that girl who was in that other one…’

Don’t underestimate the chin-scratchers, there are a lot more of them than any other audience demographic. Neither hardcore movie fans nor Internet geeks alone are enough to return the investment on a $30m movie. If the chin scratchers have never heard of your film they’ll glaze over when they read it on the cinema schedule and go on to the next one.

But there’s a second, even more interesting lesson to learn; was the buzz a joke, and was the joke on us?

Consider this; if printing an ad in a newspaper is one end of the marketing spectrum, a garbage can full of empty Red Bull cans is the other. It’s the difference between the old and the new, the traditional and the cutting edge.

We’ve read all about the tricks advertisers use to cut through the haze of constant marketing to get our attention. In the above example, garbage cans in the hottest nightclubs in London filled with empty Red Bull cans looked like the ultimate word-of-mouth (if so many people are drinking it, it must be good). In fact they were arranged by the marketing agency responsible for Red Bull’s UK launch.

The moral of the story is simple; in marketing a product, advertisers are very good. When we catch up, they have to get better.

Isn’t it possible the armies of bloggers, forum posts and fake trailers could have been a guerrilla-marketing blitz by New Line? Might that have been their marketing strategy rather than have the traditional media spread their message? Might they have generated the buzz fully intending on ‘re-shoots’ to give fans what they wanted, leaking inoffensive trailers with a family-friendly version of Samuel L Jackson’s infamous line?

All that was left was for the Internet to believe its own hype and the rest would be history. Tricking us into believing we already think it’s cool — now that’s good marketing.

It obviously didn’t work as well for Snakes on a Plane as New Line hoped, but everything starts with a first step. Watch out for similar ‘online buzz’ success stories in the future.

And don’t feel bad for Jackson, Ellis or New Line; Snakes will take over the video store soon enough, and the film was tailor made for DVD anyway.