Skip to content
January 1, 2007 in APC See more stories from this title 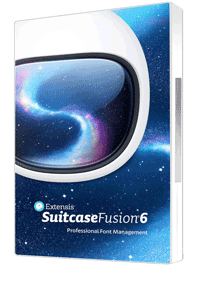 With its nearest competitor now under its own roof, can Extensis produce the font management solution they hope for?

It started badly. APC tested Suitcase Fusion on an old but perfectly functional G4. The reason was to benchmark it against the application that posed the only real threat to Extensis’ ownership of the font management market, Font Reserve. If Diamondsoft’s stripped-back font manager worked on such a system, there was no reason Suitcase Fusion shouldn’t as well.

After installation, it scanned the system fonts automatically, then we were able to copy the remaining fonts from around the computer into the Suitcase window.

Trying again with a DVD of even more fonts, Suitcase crashed every time. Sure, it might not be designed to handle an incoming 4Gb of fonts, but plenty of publishing houses have libraries that size, and nobody — least of all layout artists on deadlines — has time for prima donna software.

Now part of the Extensis stable, Font Reserve provides the best new feature to Suitcase. Rather than leave fonts wherever it finds them, it now copies every one to a custom made folder (The Vault) that gives you deeper access into each font family.

The biggest drawback with Suitcase however is the bloat it suffers. It takes much longer than it should to start up as it performs a new system scan every time — particularly cumbersome the more fonts you have. It’s a solid idea, but few designers change their system fonts much — hence the need for font management software to begin with.

In fact, the biggest irony of font management is the now-standard function of Suitcase automatically activating the fonts in your document as you open the relevant application. It almost does away with the need to collect them into job suitcases, although dragging and dropping the set to the desktop to send to your output bureau is one of the handiest features if you have a large set.

Several small bugs like the Hide command (Apple + H) not working indicate one of two things; either a rush to market or a conflict with a common Mac system component. Either way it contributes to a sound idea but a flawed product.