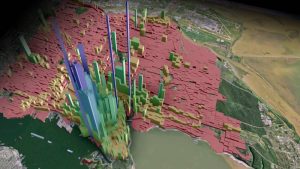 A local Mineral Geology Consultancy is making a splash among some of the biggest names in mineral exploration … including BHP and Rio Tinto. Husband and wife team Julian and Susan Vearncombe of Fremantle’s Vearncombe & Associates are capitalising on what they claim is the future of exploration with their revolutionary 3D spatial distribution software, SpaDiS.

SpaDiS does away with the practice of using exploration statistics from other sites to try and predict where deposits will be by using known patterns in geology at deposit sites to draw a 3D picture of the mineral distribution.

‘If you ask how tall a group of people are, someone will say ‘their average height’,’ Dr Julian Vearncombe explains, ‘but you lose the quality that made it special and measurable in the first place by taking an average like that. Mineral deposits are distinctly ‘unaverage’, so to make a generalisation using statistics isn’t efficient.’

The initial success of the software’s 2D version taught the company two valuable lessons, according to Dr Vearncombe. ‘After recovering the initial cost we learnt a lot about what the industry wanted,’ he says, ‘they wanted a 3D version of the product and they didn’t want another piece of software sitting on their shelf.’

Combating the possibility of SpaDiS 3D sitting around mining company offices gathering dust also offered the opportunity to add value to the software (and the consultancy service the company is built upon). SpaDiS 3D isn’t sold to clients, but operated in-house to crunch the data provided by them, which results in a report containing everything the client needs to know. According to Dr Vearncombe; ‘Managers wanted less software and more deliverables.’

So where to now for SpaDiS? According to a press release, the current task is to find an investor to develop commercialisation of the product, and the Directors have already been flown to the UK to meet with a potential investor. Even though that deal fell through, international action seems likely.

‘Going public has been debated,’ Dr Vearncombe says, ‘we’re just looking for the right investors to go in with. 50% of our consultancy business has come from overseas and most SpaDiS sales were offshore. In the end, 75% of sales are going to be overseas. It’s just a question of the size of the market.’

The Vearncombes believe technologies like SpaDiS represent the next generation of commercial exploration, and the profitable companies won’t be the ones with enormous tracts of land and arsenals of machinery, but who can get the most cost-effective use out of their data.

‘In the past it was a question of assets like land under management,’ Dr Vearncombe says, ‘from now on it’ll be who can explore better for less money.’ The lynchpin of that issue, Vearncombe believes, is technology and better use of it.

And with the mineral giants of the world falling over themselves to compete now that markets are down all over the world, the future for products like SpaDiS 3D looks bright.