Skip to content
August 31, 2015 in Cleo See more stories from this title 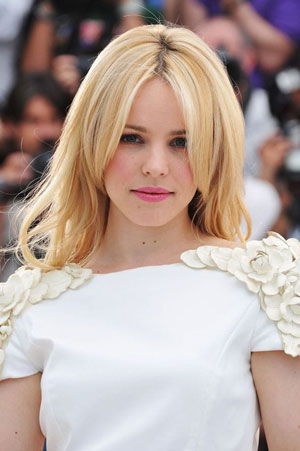 From Mean Girl Regina, and screen-stealing in True Detective to playing a fighter’s wife in new film Southpaw, Rachel McAdams wins us over every time.

Any actress we still love so much after playing one of cinema’s enduring villains must have something special.

Maybe that’s Rachel McAdams’ superpower. Even after playing Regina George in 2004’s Mean Girls (her favourite line is still ‘toaster strudel’), the world just wants to take her home to meets its Mum and Dad.

And when Cleo sat down with the 36 year old to talk about her latest movie Southpaw, she’s every bit as luminous as her many romantic and comic roles. Her smile lights up the room and her huge, expressive eyes catch us like a rabbit in headlights.

The actress, who once said she takes a close relationship away from every job (‘some romantic, some not’) would love to work with Meryl Streep, and loved filming her next film Spotlight, about a Catholic Church child abuse scandal. “[Director] Tom McCarthy was just a dream, just the nicest man. It was a very dark story and he always kept things appropriately light on set,” she says.

And it turns out she’s great in a gritty family drama playing the wife of a champion boxer. As Maureen in Southpaw, McAdams describes her character as the ‘first line of defence’ for her pro fighter husband Billy (Jake Gyllenhaal), and to her, Maureen is the kind of great female role Hollywood’s getting better at.

“I liked that she’s still a woman in a man’s world and she likes being a woman,” McAdams says. “She’s not a tomboy and she’s not trying to pretend she’s not feminine, but you know she can play hardball.”

When you look at the darker, grittier roles in McAdams’ career, you understand how capable she’d be playing the role of Maureen. But after acclaimed roles in films like Brokeback Mountain (2005), Prisoners (2013) and Nightcrawler (2014), Gyllenhaal must be a tough screen partner.

“He’s challenging in the very best way,” McAdams says of her on-screen husband. “He brings so much to the table that you can’t help but bring your A game as well. He amplifies everything. He’s always mining for the truth and the best moments possible. He really doesn’t let up – again, in the best way. I really appreciate how much heart and grit he brings to his characters. It’s what makes him the best.

She’s currently getting good reviews for her work in the second season of HBO’s gritty police procedural True Detective, and even though it was a love story, her role in The Time Traveler’s Wife (2009) alongside Eric Bana was decidedly more sombre than her chirpier fare.

Such roles are a long way from Mean Girls, and they also remind us how often McAdams has played unlikeable characters, everything from the inattentive wife in Woody Allen’s Midnight in Paris (2011) to the amnesiac in The Vow (2012) – how hard do you have to get hit in the head not to fall in love with Channing Tatum?

So it’s hilarious to learn her most difficult role was in 2002 comedy The Hot Chick, where her character swaps bodies with Rob Schneider. “I remember standing backstage, dressed like a mechanic. I had a pink bikini on underneath, grease on my face, and I just remember breathing deep and thinking ‘Oh my God, I have to go out there and do this, as a man… as a woman’,” she told the press at the time. “It stretched me in ways in could have never imagined.”

With several more movie roles in the works – including rumoured parts in Marvel’s anticipated Doctor Strange and a third Sherlock Holmes film – it’s safe to say that Rachel has well and truly settled into the Hollywood thing, and will to be on our screens for a while longer. We’ll have the popcorn ready.