Skip to content
September 1, 2008 in Men's Style See more stories from this title 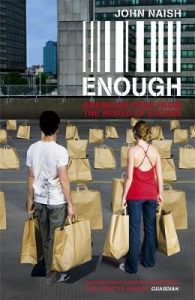 It’s not news – we have too much. Whether it’s food, the hours we work, the debt we’re in or the material possessions filling increasingly bigger houses, it’s making life worse not better. ‘If the economy has been doing so well, why are we not becoming happier?’ asked Clive Hamilton in Affluenza, his 2005 polemic against the cult of more.

After a couple of millennia of the material desires that ensured our survival and a couples of centuries of continual economic growth and production we’re now killing the planet and making ourselves miserable. It’s time, according to author John Naish, to adopt enoughism.

“Enoughism is very much about grasping the central paradoxes of the human condition,” Naish explains. He’s talking about his book Enough (Hodder & Staughton), which promises to help us ‘break free from the world of more’. The paradox is the drive to get more to survive, one that’s now doing us more harm that good.

“Your ego is always going to tell you that you could be fantastic and brilliant and have everything,” Naish explains. “That’s our genetic inheritance and it was fantastic for getting us out of the cave on cold mornings with bears and hostile tribes outside. But now we live in a culture of abundance and we need to think about containing that.”

Naish writes about the need for enoughism across the political and cultural spectrum. He terms the obesity epidemic we keep hearing about a ‘disease of overconsumption’ and remembers the age-old promise of leisure time utopia that technology would supposedly bring, one that now seems further away than ever.

Then there are the studies and indexes that rate general happiness way down despite the size of our pay packets. The fact that our post-war contemporaries were a lot happier with less money, a single garage and no Xbox is now a cliché, but it’s far from a joke. Many of the same studies claim the stress of The Chase will be the driver of the biggest health crisis in history.

Everything’s on the rise – the hours we work, the money we earn, the amount of stuff we buy and the debt we’re in. Partly it’s to do with the holy grail of economics – continued growth. It’s what Naish calls ‘the elephant in the eco living room’.

The more time we spend at work, the more our quality of life suffers. But the temptation’s strong – the easiest indicator of your worth in the corporate environment is the hours you put in. The less time we have to devote to family or spouse, the more our relationships fall apart, and we spend more time at work avoiding those difficulties, making our non-work lives emptier.

Hence we have the cliché of the office warrior who’s never as comfortable as when he or she is at work, seemingly lost with free time, edgy and tense when not within reach of their Blackberry and practicing ‘presenteeism’. According to Affluenza, only 39 percent of the full-time employed in Australia took their entire four weeks holiday entitlement in 2002.

The good news on the work front is that there are other models of behaviour. While both Australia and the UK follow the American work model, Enough talks about the intriguing workplace culture in the Netherlands. If you can’t do your job in enough time to enjoy your family and personal life, it’s assumed there’s something wrong with either you or your job.

So how did we end up like this, while countries with more emphasis on family, leisure or the three-hour lunch-hour siesta score far above us on national happiness scales? “It comes down to American culture,” Naish believes, “and the principle and American dream of infinite personal perfectibility.”

The American frontier myth of tough, pragmatic action, heroism, sacrifice and accomplishment is all-pervasive thanks to the myriad global media that emerges from the American self-image, and the net result is our adoption of everything from their work ethic to their trade policies.

Although Naish thinks More has gone far enough, he’s quick to say he doesn’t want to cast the first stone. He think true enoughism is about challenging the idea that more is better in our everyday lives, not a look-at-me environmental cool.

“It’s about making informed decisions rather than thinking there’s a template,” he says. “It’s walking around with that question ‘what is enough for me?’ in your head.”