Skip to content
July 29, 2015 in Moviehole See more stories from this title 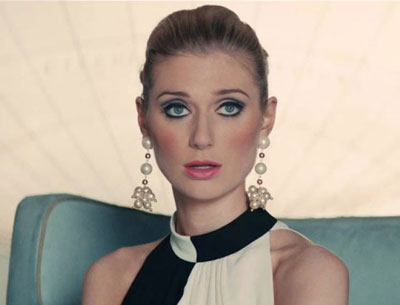 When Elizabeth Debicki swept into the room to talk to Moviehole.net about her role in Guy Ritchie’s latest rebootÂ The Man From UNCLE, we mistook her for a studio publicist. At 6’2″, with a short, stylish blonde hairdo and dressed immaculately, the 24 year old is a Glamazon.

‘Elizabeth who?’ you might ask, and many others do too until she opens her mouth and the Australian lilt (and the famous Australian self-depreciating nature) issues forth.

Debicki last played vacuous golf enthusiast Jordan Baker in Baz Luhrmann’s The Great Gatsby, and now she’s the latest in a long line of names like Courtney, Hemsworth and Robbie set to explode globally. Helping her along will be the role as villainess Victoria Vinciguerra in UNCLE, with two more high profile roles to come this year – as Lady Macduff in Justin (Snowtown) Kerzel’s Macbeth opposite Michael Fassbender, and in mountain climbing adventure drama Everest.

I play Victoria Vinciguerra. She’s English. She’s a sort of self-made woman who’s married into the Vinciguerra fortune and her husband has no idea what she’s doing with their money. She’s an antiquities dealer where she also meddles in nuclear weaponry, as you do. She’s kidnapped her father, Gaby’s father, to build weapons she’s going to sell. She brings the evil in The Man From UNCLE, so the spies are really trying to stop her plot.

How was the set and shoot?

Oh it was dreadful. It’s so hard being in Italy.

No, it was completely lovely. It was like one of those ones where you have to pinch yourself because it’s just ‘oh thank you, and the coffee was excellent’. There was a wonderful vibe on set. I think we all worked pretty well with each other.

What was exciting about working on this film was that we felt like we were making something fresh and unique. Guy [Ritche, director] has such a wonderful ease about him. He’s really spontaneous, got a fabulous sense of humour, he’s really witty. He loves you improvising.

Did you put some of your own personality into the characters?

[Laughing] Yes, well, I wasn’t acting at all.

Guy opens up a space for you as an actor where you can be spontaneous. And then I think when you are being spontaneous or improvising lines sometimes you say ‘actually maybe I think she wouldn’t do that, she might do this’, I think you end up coming out more in the character. I mean, you have to draw on your own experience or your own sense of humour, so I think our individual senses of humour are represented in the characters.

Did you have any familiarity with the TV show when you signed on?

No, I got the job and called my mum and said ‘I’m doing this movie called The Man From UNCLE‘. She went ‘The Man From UNCLE? I used to watch it when I was a kid’. So I had never heard of it.