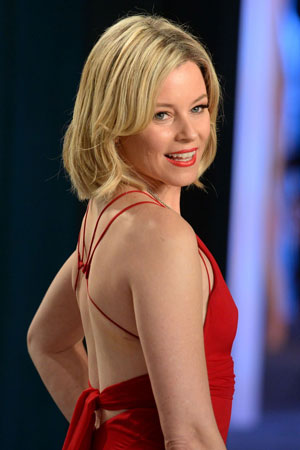 Since her eye-opening supporting turn in Judd Apatow’s The 40 Year Old Virgin, Elizabeth Banks has run the gamut of roles.

Did you really get out on the 22nd floor or were you on the 8th floor ledge where a lot was shot?

Nope, I was on the 22nd floor ledge. We were the 8th floor ledge sometimes of course, but one of the real fun things about this film was that everyone’s commitment to shooting it for real and it was one of the reasons I wanted to do it. I really like the idea of doing my own stunt and wire work.

I don’t have a fear of heights. I have a fear of human error. I’m very concerned about stupidity. Luckily we had a great team of stunt guys but you still check the harness about 15 times before you go out and even then I’m waiting for a bird to fly into my head or my coat to get caught in the window or something.

But you have all that adrenalin pumping the whole time and stunts 101 is ‘don’t let the adrenalin run the stunt’, you need to control it. I definitely threw myself into positions a little too enthusiastically and told myself ‘Woo, that was close!’

Did you do all your own stunts?

I’d never want to take away from a great stunt person but I don’t actually know, I don’t remember a stunt woman so I think it’s me pretty much the whole time.

It’s another very different role for you, was it a case of looking for something to show you could do this kind of role or did somebody else think of you outside the box?

I read the script and I thought it was a really tight thriller. I like this type of movie generally, it reminded me of the Spike Lee movie Inside Man. I really liked that and I liked Italian Job, I like these kinds of movies. So I read it and thought it was really tight and then I think somebody on the other side said ‘oh we like her too’. And then I was on a Skype call with Asger [Leth, director] and then a week later I was in New York.

One thing those movies have in common is that they’re thrillers and they’re structurally sound but they all have character development. That’s unfortunately absent from 99 percent of the thrillers we see.

That’s another reason why I was interested in this. The role of Lydia Mercer felt gender unspecific, which I thought was interesting. It could’ve been a guy’s role. I think it added something to it that she’s female and cluey. Of course they always want a little romance. I mean you got Sam Worthington, you might as well give him the love interest.

But I never felt that was a requirement for her. I felt like there were no apologies made for her. Mostly in these films the woman has to be bitchy or cold or a Daddy’s girl.

So it felt very authentic and when I met the actual New York City negotiating team they were girly and had long hair and they were mothers. They understand they’re women in a man’s world for sure, it is absolutely a brotherhood but every movie set is the exact same, so I’m not unfamiliar with being a woman in a man’s world. So that was compelling to me.

You have a really dynamic relationship with Ed Burns. How much rehearsal did you have with establishing the contention between you that develops a shift in the characters?

Ed Burns and I are just in love, that’s all it is. We’re two peas in a pod. I’m highly respectful of the fact that he gets to go home and sleep in a bed with a supermodel and I still don’t understand how he was able to figure that one out. She’s also a multi-millionaire and she’s a do-gooder, it’s really disgusting.

But we literally met and it was gang busters from minute one.

Let me just say that role in the script [Burns character of Jack Dougherty] was very throw away and then I found out he was interested in doing the movie so I went to Asger and said I wanted to use him, now he wasn’t just some guy off the street we can really make something fun out of this. He’s such an authentic New Yorker, he’s from a family of cops. I couldn’t have asked for a better guy to be standing there with.

So it just happened naturally because we committed to it. I find the camaraderie of the NYPD really interesting and fascinating and I wanted to represent them. I didn’t want to be in a room and just have a bunch of extras that I gesture to every now and then. I really felt like there should be some real tension in that room as well. Because the other guys I talk to are downstairs on walkie-talkies and it’s very hard to create a relationship with a walkie-talkie.

How did you work with Sam during the rehearsal period?

He’s a very committed actor and he’s a very distinctive guy. He’s very interested in scripts and structure but he’s also very physical. He’s got a very, a deep physicality about how he works. So I think one of the fun things about watching him is because the ledge was so contained and he was shaking to get the fuck out of there the whole time. He’s like a wolf that wants to run free and that ledge was a cage.

What did you take away from the experience of Man on a Ledge?

I really love action. I really liked running around. I loved being very physical.

Your career seems to have morphed over the last five or six years from being a comic to a thriller actress. Is that conscious and do you agree?

No I wish there was more comedies. I mean, how many comedies came out last year that were really great? Not many. So they’re just few a far between and yeah.

Is this why you and your husband have your production company?

I have a production company because this is the only job I know and this is the only career I have and the only industry I’ve ever worked in. Why wouldn’t I produce? Great ideas can come from anywhere. I love story telling, I’m a trained storyteller – I believe that’s what actors do.

But as an actor you come into the process last. I mean Lorenzo [di Bonaventura, producer] chose this script and developed it and he chose the writers and chose the director and he chose me. So he gets to shape what this product becomes and with me playing Lydia Mercer, that’s all I get to control. And I don’t even really control that because they edit the shit out of it.

So as a producer I really get to tell stories that I care about in a way that I want to, I get to shape them. I get to choose the collaborators and that’s really gratifying as a storyteller. And also frankly, it’s really fun to create jobs for other people.

Does that mean you’ll be looking for comedies in particular because there aren’t many of them?

What’s next on the slate?

We do have a project at Disney called Tink. It’s a live action Tinkerbell movie sort of in the vein of Elf in which I would play Tinkerbell. Tinkerbell gets thrown out of Never Never Land, and it’s about where she goes and who she meets and the adventures she has.

We’re in script stage and everybody is really excited and blah, blah, doesn’t mean anything. You might as well not even write it down because who knows, it might not even happen.

But Tinkerbell is one of the greatest characters because she’s mischievous and snarky and fun and sexy and jealous and vengeful.