Skip to content
March 16, 2008 in The Sun Herald See more stories from this title 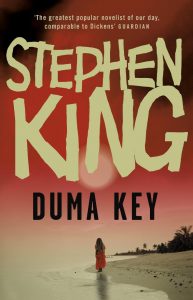 If you’re one of the fans who went a little off Stephen King when he left vampires, monsters and nefarious spirits behind around the early 1990s, Duma Key is the perfect book to reacquaint yourself with why you once loved him. The King, as the saying goes, is back.

Duma Key is the story of Edgar Freemantle, a former construction magnate critically injured during an industrial accident, now a one-armed amputee and shadow of his former self. Moving to the small Florida Keys island of Duma to convalesce from the psychological fallout of his recovery, he makes friends with his enigmatic neighbours, an ageing art matriarch and her minder, a former lawyer who becomes Freemantle’s closest confidante.

Without warning, Freemantle is inspired to sketch and paint the endless Gulf of Mexico that stretches away in front of his rented house, then finds himself inserting abstract objects into his work from memories of his accident, family, and unexplained objects that you just know are sinister.

The old lady down the beach is slowly descending into senility, but her few lucid moments give Freemantle clues into the dark past of Duma Key and her part in it. She was the daughter of a local businessman who grew up in a rambling mansion in the island’s interior, a region now choked off by vegetation. There she had a large family whose numbers were gradually depleted by an ancient cursed object that gave her strange powers similar to Freemantle’s.

It’s the kind of multi-layered, historically dense narrative that makes many ghost stories great, and King combines it with his signature realism, creating believable characters and putting them in the midst of extraordinary circumstances. We believe in them and care about them, and even when the relationships are a little ham-fisted, we take these peoples’ journeys with them every step.

Underneath it all is a rich mythology, a classic monster story that manifests itself in their lives and which we discover along with them as the drama and terror builds. Duma Key is full of real-world horrors as well as the classic ghost story kind of the walking dead, inanimate objects that move themselves and things that go bump in the night.

The character of Freemantle is obviously one close to King’s heart. He’s a half-broken man, an echo of King’s own experience with pain and healing following the 1999 accident when he was run down by a van. He puts us right inside Freemantle’s head where every step is now an act of unimaginable bravado and where even his phantom limb is a prophetic Macguffin.

Like the best examples of King’s work, it’s full of narrative anchors, talismans of objects or ideas that crowd the narrative, some integral to the plot, some merely whispers of characterisation. They combine to present a deceptively linear and easy-to-follow monster mash, but King’s dexterity revealing them at just the right time and with the right amount of gravity hooks you in and reminds you what a master storyteller he is.

Any author that makes you believe in the tragic premature death of an adult daughter and monster frogs the size of cocker spaniels in the same book is something special. That’s what’s perhaps most gratifying about Duma Key – King’s return to the supernatural instead of drama tinged with disturbing elements.

What’s more, it’s all delivered with a turn of phrase uniquely King’s own. He almost belongs in another time away from Sex In The City, blogs and lattes with homilies that colour a simple message with wry charm. His wife doesn’t just leave him, but (sic) ‘takes off the Freemantle uniform and quits the team’.

After the patchy, indistinct Cell and King’s long night of the soul in the years after his accident, he’s found his sense of playful menace with goblins and monsters again, and Duma Key is as good as any of his genre classics.