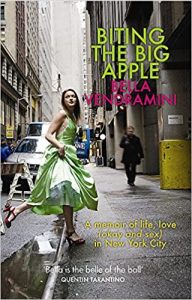 It’s a plot twist the likes of which few novelists would even think of. Even if they did, frowning editors would probably tell them no book could accommodate such a seismic shift in tone.

New Zealand born Bella Vendramini released her travel/life memoir Biting the Big Apple in 2009, a zippy tale all about her adventures moving to New York to train at the prestigious Lee Strasberg acting school, various romantic flirtations, friendships and adventures. For most of Naked In Public it’s a similar story of international jetsetting and riotous living that goes from the crashing the Cannes Film Festival to excavating a German POW camp.

Then it turns dark. Bella suspected her then-current boyfriend Aiden had trouble with both drink and his temper, and three chapters from the end of the book, Bella walks into a storm where he bashes her.

It’s something you’d expect in a harrowing memoir about a long-term abuse victim only just re-engaging with life. The difference is that until that point, both books are sprinkled with liberal doses of flighty, LOL-style first person dialogue and comical passages in praise of vodka, chocolate and the gods of fate.

Biting the Big Apple and Naked in Public could both be termed adventure stories. Many people wait their whole lives to find themselves living just one of the adventures Vendramini seems to lurch effortlessly between. Just what is it about her that attracts such extremes, everything from befriending Quentin Tarantino to being mercilessly beaten by a man she loved?

“I’m a drama seeking missile!” the actress and author says from her current home in country NSW in the same spirited turn of phrase as the book despite the cold she’s nursing. “I think there was a period in life where I realised I was saying no to a lot of things. It might have been to do with fears or insecurities but I made a conscious choice a couple of years back to say yes to life. It sounds trite but when you say yes to opportunities you get such incredible adventures.”

But while she lived the whirlwind of different countries, jobs and lifestyles Vendramini writes about in both books, Aiden wasn’t the only toxic man in her life. A marriage to James was wrecked by a drinking problem too, although it was emotional and psychological manipulation rather than violence that ended it.

After The West tries to crack a joke about attracting the wrong kind of man that’s light hearted and sensitive, we can’t help but ask if it was cathartic or just agonising reliving those relationships after the hopeful, fun-filled optimism of Biting The Big Apple? Was she the same woman who says ‘life is good and sometimes feels like a bloody wonderful, big carnival’ as she was writing about a man punching her so hard he knocked her down?

“It was kind of awful,” Vendramini agrees. “When you survive and get over something that’s traumatic and learn your lessons from it you want to move on, and it was tough having to go back and write about those feelings. I didn’t mean to shock people because it’s hard to read just like it was hard to live through. I wish it hadn’t happened even for the sake of my readers because it’s horrible to read. I know my parents actually both had to skip that part.”

But if both Vendramini’s books tell us anything about her, she’s one of those irrepressible, larger than life spirits. There’s a sweet innocence about her way of looking at the world, her heart always open to the experience and — good or bad — diving into it headfirst. “There’s lots out there in life,” she agrees. “It’s an exciting place and there’s so many ideas out there, there’s artworks, there’s people… I like life a lot and so I want to jump into it and explore it.”

So after the good and the bad, the most intriguing aspect about interviewing Vendramini is to see if she really is the lady she sounds like in her work. Writing is all about developing your own voice — is this really hers? For example, could the point of view in Biting the Big Apple and Naked in Public only come from an Aussie or Kiwi? “I think so,” she says, “because it is particularly Australian. I’m not entirely sure Americans get our humour completely and we probably don’t get theirs.

“It was fascinating because when I was first asked to write it I really didn’t know what was going to come out. I didn’t know if I’d be terribly serious or funny or what kind of writer I’d be at all. But my Mum’s [Rosie Scott] a prolific author so I asked her advice. She said you’ve just got to trust in your own voice and it will come. So I did, I just starting writing, and I think what surprised me is that it did end up being so humourous. I guess there’s humour in tragedy, there really is.”