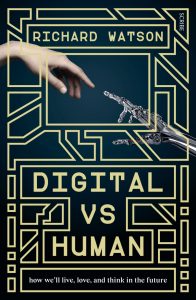 According to Digital vs Human, we need to start talking about the way robotics, AI, automation and the web are going to further affect us – but we aren’t. Instead, we’re constantly wowed by the next app or website that mints a billionaire and (in the words of an online commenter) only really solves the problem ‘what is my mother no longer doing for me?’.

Author Watson thinks it’s technology itself distracting us from talking about it – the big picture is taking shape out of our sight while we obsess over status updates and celebrity selfies.

Like Watson’s last book Future Files, Digital vs Human is partly the story of aging and our relationship to tech as we grow older. The book has a slight ‘harrumph, these kids and their phones’ air about it, but he admits fears about technology are as old as papyrus scrolls, and he cannily quotes Douglas Adams’ famous pearl of wisdom; ‘Anything that gets invented after you’re thirty is against the natural order of things…’

As well as that, Waston draws on some fascinating research that seems to reveal how secretly unsure we all are – even selfie-obsessed kids (a poll found 27 per cent of 18-24 year old Brits felt ‘left behind’ by digital communications).

After outlining its thesis, Digital vs Human is made up of chapters that deal with areas of life on the cusp of revolutions (healthcare, transport, medicine, etc). While those sections collect and sum up interesting case studies of things you’ll see over the next decade or so, the real value is in the philosophical positions Watson takes.

His assertions and beliefs will spark different responses depending on your own position on technology, and you soon realise there might not be any universal truth about it – it’s going to be coloured by all our individual prejudices, our ages, even where we’re born (thus the kind of technological infrastructure we’re used to).

For example, there’s a little Ludditisim. In talking about Ray Kurzweil’s concept of the singularity (when machine intelligence outstrips ours) and the notion that machines will design and build machines in turn, he goes on to say ‘let’s hope these machines are nice to us’ – seeming to give in to bias formed by everything from Frankenstein to The Terminator.

Then, later on, he raises the very real fact that all the data we’re producing with all these updates and posts is making some companies very rich very quietly off us, something little talked-about in society to a degree that’s almost catastrophic (then again, ask a 16 year old Facebook fan if he/she cares and they’ll shrug – personal prejudices again).

It’s a well-argued salvo in a social dialogue that needs to be constant because as always, the future is already here.