Skip to content
December 12, 2002 in Xpress See more stories from this title 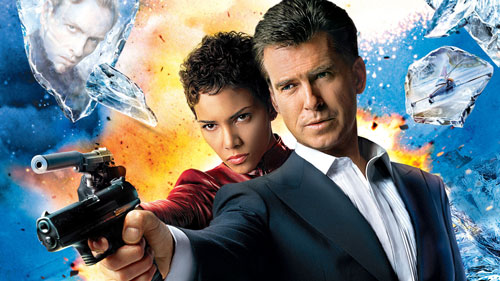 Following Dr. No (1962), the Catholic Church criticised James Bond for his immoral penchant for sex and violence. As double agent Miranda Frost (Rosamund Pike) says in the 20th Bond adventure, Die Another Day (released today), ‘He’ll light the fuse on any explosive situation’.

Fans will tell you James Bond films have a certain quality. Ask what it is and you’ll get choruses of ‘girls’, ‘guns’ and ‘gadgets’. But according Robert Wade, scriptwriter and half of the two man team responsible for the last two Bond scripts (Die Another Day, The World is Not Enough), it’s something more ephemeral.

“It’s the way it’s done,” he explains, “The continuing popularity of James Bond is James Bond, this man who pulls things off in a way nobody else can, with a style of his own you don’t find in real life.”

For the man who dreams up new Bond predicaments, there must also be incredible pressure to constantly deliver something the audience recognises (and to some degree expects), but in a new way each time. The entire Austin Powers franchise has been based on some iconic Bond fixtures and characteristics (“Guard,” Dr Evil instructs, “start the unnecessarily slow dipping mechanism.”

As Wade recalls, keeping the source material in mind was important. “We tried to introduce something new by going back to the character from the Ian Fleming novels,” he says, “Bond has become something superhuman — he gets shot at but never gets hit and pulls of quite amazing feats.

“We decided to actually make him very human — getting caught and getting hurt — as a way of regrounding it all to show he’s a man, not a superhuman. That’s the only element of reinvention in the film.”

Following Roger Moore’s last appearance as Bond in 1985 (in A View to a Kill), the series lost its way. Earnings dipped sharply, mostly in reaction to the casting of Timothy Dalton — an actor fans didn’t like despite claims he was more faithful to Fleming’s vision for Bond than Connery, Lazenby or Moore had been.

“In Fleming’s original novels, Bond wasn’t a Cold War figure,” he thinks, “They used the backdrop of the Cold War, but they weren’t about Bond fighting communism. In Casino Royale, where the character was formed, Bond says at the end he’ll always go after the hand that holds the whip.

“It doesn’t matter how much world politics has changed, that’s as relevant today as it’s ever been. He’s a man using his instincts to hunt down evil regardless of the government alliances involved.”

“And Pierce has really nailed it,” (obviously one of James Bond’s innate talents as well), “The scripts that succeed are the ones that take advantage of the individual actors’ strengths, so we definitely wrote it for Pierce and would write a completely different story if it was another actor.”

And whether it’s the magnetism Brosnan brings to Bond that’s been missing for so long, appreciation of the tradition shown by New Zealand director Lee Tamahori (Once Were Warriors, Along Came a Spider), or the boiling pot of ideological maniacs, beautiful and dangerous women and explosive, over-the-top action handled by veteran second unit director Vic Armstrong, Die Another Day is a direct hit.

All concerned have struck a near perfect balance of bringing you the adventure you expect from a Bond movie but keeping you on the edge of your seat throughout the trademark quips, political intrigue, superspy machinery and action sequences.

Tamahori seems to realise the Bond franchise is essentially about action, and he wraps a scorching action movie up in all the Bond accoutrements.

The premise of having Bond captured, tortured, and declared unfit for duty on his release so he has to act outside official recognition is more or less a throwaway gesture to inject something different — thankfully it doesn’t upset the essential Bond rhythm.

This time the tyrant is a North Korean army officer intent on overrunning the south. Presumed killed in the destruction of the opening sequence, he re-emerges as a playboy British philanthropist thanks to genetic alteration technology.

It’s Bond’s hunt for his right hand man, the chilling Zao (Rick Yune) that leads him to the truth. He and foxy NSA agent Jinx (Halle Berry) team up to track the bad guys from Cuba to the wastes of Iceland, site of a very Bondesque villain’s lair — a giant ice palace. There the Icarus project will be activated — a giant mirror in space designed to be a reserve sun (in reality a superweapon to decimate pro-South Korean forces).

After ‘winning over’ both Jinx and the delectable double agent Miranda Frost (Pike), James blows up, shoots, fights, and scrapes his way from one spectacular action sequence to another, each one more over the top and destructive than the last.

The portrayal of the new Q by John Cleese is a relief — after the death of the original Q (and Bond film veteran) Desmond Llewelyn, it seemed part of the mythology was lost forever.

But thanks to deft touches like Cleese’s presence, the series has successfully renewed itself. Hopefully it’ll keep us just as enthralled for the next forty years as it has for the last.