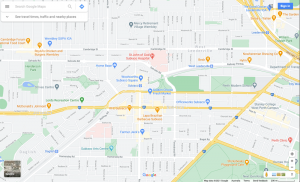 Ever looked at a satellite picture of Australia and wished you could zoom right in on your house? With a unique new Perth technology on the streets, you can.

The aptly named i-delve lets you delve into a map on your web browser and get increasing levels of complex information the further in you go.

Already making a splash in local real estate, i-delve is only the beginning, according to its developers.

Says Steve Lieblich — who joined i-delve’s creators nine months ago to help commercialise it — ‘The Geographic Information Systems market is growing at about 20% a year, and it’s worth $32 billion. It’s a very broad market.’

With who? Try everybody, from governments keeping an eye on public transport assets and miners mapping deposits to farmers trying to plan floodways from land elevations.

It works by drawing an image on your web browser that you can zoom in or move around on by using your mouse, updating itself live by constantly streaming data from the dataset (for example, a detailed CAD of the Pilbara) over the web. ‘Most of the technology is the ‘reload the image and go and make a cup of tea’ type.’ Lieblich explains, referring to the speed static images change according to movements of your mouse (employed by the popular street directory sites).

i-delve’s other advantage is the ability to include vector data (the use of mathematically defined lines) over a pixel image by identifying landmarks with shapes which can then be linked to anything from the rental price of a property to capacity of a gas pipe. ‘There’s nothing else commercially available that does this’ Steve Lieblich assures me, ‘The vector layer has the real value, because you can bury lots of metadata behind it.’

i-delve co-developer Dr Paul Williams says the company’s already had bites in international waters. ‘Investors in Singapore have talked to us about moving all our operations over there.’ he says.

But Amristar are happy with the Perth lifestyle, market potential and what Lieblich describes as their ‘strategic alliances’ — joining other organisations to promote i-delve’s benefits rather than simply selling it.

And their first, with local real estate portal Aussiehome.com, is already offering a better service thanks to the i-delve driven map (offered on their website alongside their old mapping system).

‘It’s working really well,’ Co-Director Nick Streuli explains, ‘It’s faster than the system we used before. It’s more customised to what we want. The old system was getting twice as many visitors as the i-delve one, now i-delve is getting four times more use than the old one.’

And it’s about something more than money. ‘In terms of revenue, there’s no change,’ he says, ‘But it gives the customer a better experience. Feedback we’ve been getting has been good.’

And from Aussiehome.com’s perspective, Amristar’s approach paid off. ‘We had the old mapping system for two years and couldn’t afford to improve it,’ Steuli says, ‘Amristar were willing to do something entrepreneurial. Now the benefit to them is that they’re getting to show off their technology on our site, which gets between 1300 and 1500 visitors every day from all over the world.’

And over the web isn’t the only place everyone from lost commuters to farmers could be using i-delve.

‘PDA’s, mobile phones, new telecommunication technologies, ‘Dr Williams ventures, ‘We can already have a laptop in a car with a GPS seeing where you are on a map.’

So having already proven itself against its nearest relatives, i-delve has the potential to be a technology standard after only its first tentative commercial steps.